"I have to prove myself every day" 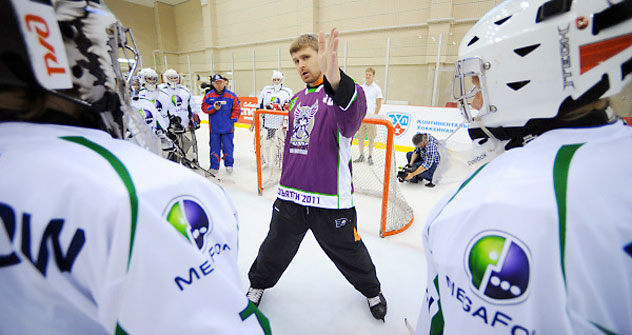 This summer, rumors flew that Ilya Bryzgalov was being courted by one of the teams of Russia’s Kontinental Hockey League teams. But instead of returning home, he signed a nine-year contract with the Philadelphia Flyers for $51.5 million and became the highest-paid goaltender in the NHL. This summer, Ilya Zubko and Ilya Sobolev from Rossiyskaya Gazeta met with Bryzgalov in Moscow, where he was holding coaching clinics for boys.

Rossiyskaya Gazeta: It’s summer, the time for vacation. You could be lying on the beach, resting up before the season begins, but instead you’re busy with kids. Why?

Ilya Bryzgalov: I’ve rested enough. I was able to lie on the beach. I stayed with my family and my friends all came to visit. Why do I spend time on these clinics? I heard that there was a problem and I came to solve it, one way or another. Or at least to try.

R.G.: Do you wish you’d been able to attend these kinds of clinics as a child?

I.B.: Of course. It would have been better if I’d had a coach to constantly give me advice. Maybe I would have played for the NHL at the age of 22 instead of 25, for example. Who knows? I didn’t have that opportunity.

R.G.: It’s a paradox: conditions [in Russia] are better, but we still have problems in children’s sports. Why is that?

I.B.: I grew up in the Soviet Union. Everyone was paid 120 rubles. For some people, let’s say it was 140 rubles. But in general, it was equal. Coaches had fixed wages. Now there is a tremendous division in society. It’s very difficult for a coach receiving a salary of 10,000-15,000 rubles [$345-$520 per month] to survive in any city in Russia, let alone in Moscow. So what does the coach have to do to survive? [That’s why] there’s corruption in children’s hockey. And that’s why many players with the potential to become stars quit.

R.G.: Would you be interested in establishing not just a training camp, but an entire school under your patronage?

I.B.: If I do, it will just be me, because I don’t trust anyone. There are these nuances that can

play a huge role, and I prefer to explain them to the children myself. Handing it over to someone else and just using your name as a guise is wrong. If you want to do it, you should do it yourself.

R.G.: When you look back on your journey from being just a kid in Togliatti to an NHL star, how do you feel about it all?

I.B.: I don’t look back. I have to move forward and reach new goals.

R.G.: You are now the highest paid goaltender in the NHL. What does money mean to you in general?

I.B.: Money is just paper. Right now they’re predicting a crash in America, and [if that happens] you’re poor. The most important thing in life is knowing what you have and what you can do. If you know how to do something, you’ll always be able to feed yourself and do some kind of work. And there are always people out there who will support your ideas and help you apply your skills and knowledge.

R.G.: You’re now the goalie for the Philadelphia Flyers, a team that has traditionally not treated Russians very well. [Player Nikolai] Zherdev complained that they “stifled” him there. Does this bother you?

I.B.: Look, there was Zherdev and [Sergei] Bobrovsky. They speak very well of Bobrovsky. They don’t judge people by their passports, they treat you by how well you do the job they pay you for. They look at how you interact with the team, since it’s a united entity, and at how you behave. And they treat you accordingly. If you’re a good person and do your job, they will love you. If you have some kind of problem, it makes no difference whether you’re a foreigner or not.

R.G.: But few Russians have ever played for Philadelphia. It’s not like the Detroit or Washington teams. That can hardly be a coincidence.

I.B.: Each team has its own playing style, its own signature. That’s what brings players together.

R.G.: How do you like the city of Philadelphia? What has surprised you there?

I.B.: The city is beautiful. It’s the former capital, how can it be bad? For the most part, I haven’t had much time to explore Philadelphia. I was only there for two days. Even then I was basically just in the practice arena. I know there’s the Liberty Bell and the building where the Declaration of Independence was signed. There is a lot to see and a lot of history. It’s where America was created.

R.G.: We’ve already touched on your victories. You’ve had two in your career so far: winning the Stanley Cup and the gold medal at the World Championships. Which is more valuable to you?

R.G.: Even though you basically pulled off the win for your team at the 2009 World Championships?

I.B.: They are two different things. The World Championships is a fleeting tournament. In the NHL, you have to play a lot of matches and put in a lot of work. The work is a lot of wear and tear. Everything is significant: the prestige of the trophy, the fact that your name is inscribed in the Cup… And most importantly, the best of the best play in the NHL, so winning this tournament means that you are truly the best in the world.

R.G.: After winning the Stanley Cup, did you have the sense that you had joined the ranks of the greats?

I.B.: To be great, you just need to win a lot. When your whole chest is covered in medals and you have rings on all your fingers, then you’ll be great… I think I still have a long road ahead of me.

R.G.: Speaking of great victories, do you plan to hold onto your rank among the best until [the 2014 Winter Olympics in] Sochi?

I.B.: You know, I can’t claim I won’t decline. I will try and then we’ll see where life takes me. I hope that I’ll be worthy of an invitation to join the national team. But I have to prove myself every day. It’s a right that has to be earned.

Ilya Bryzgalov was born June 22, 1980 in Togliatti. He learned the basics of hockey playing at the local hockey club “Lada.” He was with the team for one-and-a-half seasons, and was awarded Best Newcomer for the 1999-2000 season.

Before making it to the first team of the Anaheim Ducks, he spent five years in the lower leagues. In the 2006-2007 season, he won the Stanley Cup. In 2007, he was traded to the Phoenix Coyotes, where he set a team record for the most victories in a regular season (42). Thanks to Bryzgalov’s efforts, the Coyotes made it to the NHL playoffs two years in a row after a nine-year break. Ilya was nominated for the Vezina Trophy, an award for the best goaltender in the NHL.

At the end of the 2010-2011 season, Bryzgalov signed a nine-year contract with the Philadelphia Flyers for $51.5 million. In the next season, Bryzgalov will be the highest paid goaltender in the NHL, making $10 million per year.

Since 2000, he has regularly been invited to play with the Russian national team. With his help, the team won the bronze medal at the 2002 Olympic Games in Salt Lake City, and became world champions in 2009.