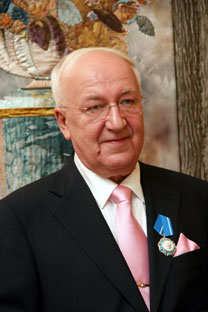 A recent verdict by India’s Supreme Court has cleared the decks for developing the Roerichs’ Tataguni Estate in Karnataka into a museum-cum-art gallery. The court verdict has also brightened the possibility of fulfilling the iconic Russian artist’s vision of the estate as a cultural-cum-natural reserve open to all.

As a personal friend of Svetoslav Roerich and Devika Rani for almost a quarter of a century, I was privy to and a participant in the drama of the Roerichs’ last years. I was also fully aware of the situation around their immovable property as well as priceless collections, which was unfolding in 1989-1994 like a Greek tragedy.

The verdict of India’s Supreme Court on Tataguni Estate represents an event of international resonance, which the world Roerich community had been waiting for nearly 17 years. This is a tangible triumph of justice for all of us – the judgment protects the dignity of the Indian and Russian governments and Karnataka’s state administration. This is a triumph of all honest and committed admirers of the unique Russian family, who had been persistently trying to prevent the estate from falling into the hands of dark and unscrupulous people – Indian and foreign fixers, local “liquor barons” and “land sharks”. The dirty tricks of Mary Poonacha, who treacherously betrayed the sacred memory of the Roerich family, should at last receive a clear legal punishment. The verdict has put an end to the villainous machinations of this criminal personality (she is still on bail), once and for all. I have horrid memories of her, and I feel I was perfectly justified in describing her as a “sari-clad devil incarnate.”

Russia is earnestly interested in the preservation of the priceless legacy of the Roerichs’ family for whom India had become a second home. Millions of Russian citizens expect that at last the path has opened up for the fulfilment of Dr  Svetoslav’s dream to set up a cultural-cum-natural reserve in Tataguni, which is open to Bangaloreans and numerous tourists from India and abroad. Many a time, he shared these dreams with me and my colleagues. Svetoslav Nikolaevich visualized the future of the Estate not only as a museum, but rather as a vibrant spring of creative quest, a special spiritual place for the talented and young artists, admirers and connoisseurs of the Roerichs’ heritage, a venue of exhibitions and scientific seminars.

The Russian side and the state government of Karnataka have always insisted that the paintings of Svetoslav Roerich and masterpieces of art collected by him and his wife, Indian megastar Devika Rani, should be available to the people. We hope that soon we will be able to translate into reality yet another project which Svetoslav Roerich was contemplating upon – the establishment of an International Academy of Fine Arts -- on the territory of the Estate. We know that the government of Karnataka was drafting these plans even in the difficult conditions when the Estate was under court arrest. This means that people, who were guarding the priceless legacy, always believed in the triumph of justice over evil.

The Russian side is ready to provide experts and all other assistance, including sponsorship, in the implementation of the project. We have highly qualified specialists who could share with their Indian colleagues their experience of museum science, who could participate in setting up the exhibits, in chalking out programmes for the International Art Centre. We have already received proposals to finance the restoration of Svetoslav Roerich’s paintings, which miraculously survive the long ‘imprisonment’ and are now in a dilapidated state, as well as for their subsequent conservation and exposition of the collection.

We can rely on material and financial support coming not only from the state resources, but also from joint Indo-Russian enterprises. Incidentally, one of these structures – AFK “Systema”, which is successfully working in the Indian market for quite some time – has already declared its intention to join efforts to restore the paintings.

The Roerich family’s spiritual and cultural heritage represents one of the bridges, connecting Russian and Indian nations with invisible but ever so strong links. It cements our bonds of friendship and cooperation, and imbues them with unique depth and versatility. That is why it is so natural that we consider it possible for the Russian side to participate in the establishment and activities of the memorial complex in Tataguni. It could be done on the pattern of the “Northern” Estate in Naggar, Kullu Valley. It would be appropriate if the Tataguni Project is announced and top priority given to it at the highest political level, as it happened with the Roerich Memorial Complex in Naggar, which was brought one and a half year ago under the honorary patronage of the co-chairs of the Indo-Russian Inter-Governmental Commission with Russia’s Vice-Premier Sergei Ivanov and India’s External Affairs Minister S.M.Krishna as patrons-in-chief.

I believe we should move without delay to work out a special format of Indo-Russian interaction, to unite both the complexes under one governing structure for the sake of more efficient coordination of their activities. I am absolutely confident that such a joint initiative is truly justified and will correspond in the best way to the task of careful preservation of the Roerichs’  legacy, which continues to be relevant not only to the people of our two countries but to the entire humankind. It would be somewhat premature to speak about concrete forms of such interaction, but, the existing goodwill allows us to believe that together we will manage to optimise the potential of the project.

The Embassy of the Russian Federation has always been in close touch with the Karnataka government on all matters related to Tataguni. We intend to continue cooperation in future as well. The recent court verdict has opened new favourable opportunities and we should seize them. We highly appreciate the efforts of the local administration to protect and safeguard the Estate during the tumultuous times of the court litigation. I would like to specially emphasize the stellar role played by the former government-in-charge of the Estate, Ms Nila Majunath, and its present curator Mujeeb Akhmad.

It would be no exaggeration to say that it became possible to preserve so much which otherwise could have been irretrievably lost or stolen, thanks to the conscientiousness and dedication to the cause and concerned attitude of these modest but devoted officers. In our future work we will certainly be relying on the positive experience, accumulated during decades of our interaction in all matters related to the Estate, especially during the time when the Karnataka government was headed by Mr S.M.Krishna, who is now India’s External Affairs Minister. I would like to underline the highest appreciation of his tremendous personal contribution to the preservation of the Roerichs’ cultural and spiritual heritage and the establishment of the memorial samadhis in Tataguni that befits the luminous memory of Svetoslav and Devika Rani.

Taking into account the special significance of all issues related to the Roerichs’ legacy in India, the Russian embassy will closely interact with the Central government in New Delhi. The court verdict was declared only recently. However, we are quite happy and are inspired by the positive reaction to this verdict from India’s external affairs ministry and the Indian Council for Cultural Relations (ICCR). Our colleagues and friends share with us the high value of the court verdict and its meaning for the future. We shall continue to work together with them. I am sure we will be able to find best options to make our plans a reality. Just imagine – the International Roerich Memorial Trust IRMT) in the Himalayan Kullu Valley will proudly celebrate its 20th anniversary in 2012! What astonishing triumphs we can achieve when the efforts of two nations are united!