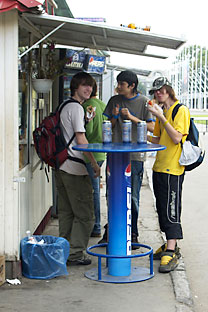 Kiosks will be banned from selling beer under new legislation. Photo: PhotoXpress

It has become harder to obtain adult beverages now that the Duma has finalized a ban on nighttime sales of drinks with more than 0.5 percent alcohol.

The State Duma recently approved additional restrictions on alcohol sales in the country that will end sales of beer at night and from kiosks.

The law is expected to fully enter into force by January 2013, but it is already causing shock waves in the industry. Danish brewer Carlsberg, which owns local market leader Baltika, saw its stock fall to a near four-month low in July.

Under the new law, stores will be banned from selling drinks that contain more than 0.5 percent alcohol between 11 p.m. and 8 a.m.

Experts said it is unlikely that the restrictions will have an impact on alcohol consumption because people will simply buy the products earlier or illegally.

“This bill won’t reduce alcoholism in the average citizen, but it won’t harm the consumer and the producer either,” said Vadim Drobiz, director of the Research Center for Federal and Regional Alcohol Markets. “Nighttime crime will be reduced as well as nighttime hooliganism.”

Train stations and kiosks will be banned from selling any alcohol under the new law. These semi-permanent outlets now account for one-third of Russia’s beer sales — or about $6 billion, Reuters reported.

Some industry representatives welcomed the restrictions.

“Kiosks are a humiliating presence for a large city such as Moscow,” said Alexander Romanov, general director of the Alcohol Manufacturers Committee. “Kiosks that sell alcohol should not exist.”

But other industry representatives fear that the ban on alcohol sales will make kiosks unprofitable and will force them to close. Alcohol sales account for almost half of the profits for kiosks, SABMiller’s Kirill Bolmatov told Vedomosti. Vyacheslav Kuzmin from the Union of Russian Brewers warned about the disappearance of kiosks from rural areas. “They are often the only source where people can buy food products,” Kuzmin said. “It will hit people hard.”