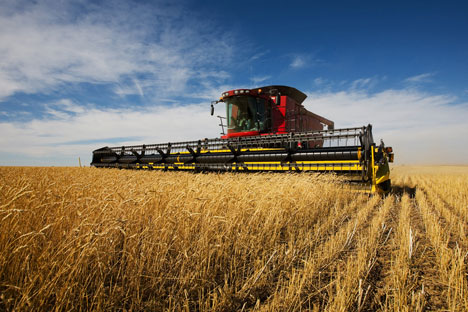 "We suggested today to companies in the region to enter the Russian market given its large scale and to establish themselves to produce food for [their] own supply," Deputy Economic Development Minister Andrei Slepnyov said last week in an interview in Manado, Indonesia, where he was attending a meeting of the Association of Southeast Asian Nations trade ministers.

President Dmitry Medvedev is turning to Asia to boost exports as his country's economy struggles to grow at the pace it did before a 2009 recession. Russia is targeting grain buyers in Southeast Asia to regain its share of the world market after lifting an export ban in July, the Moscow-based Institute for Agricultural Market Studies said Aug. 1.

"Many Asian governments are exploring alternatives to secure food supplies over the long term given that the demographic and environmental pressures in Asia could lead to structural food shortages in the years to come," said Frederic Neumann, co-head of Asian economic research at HSBC Holdings in Hong Kong. "In fact, it's already showing up in greater inflation pressures in the agricultural sectors in the region."

The country has about 24 million hectares of undistributed arable land that should be sold at below-market prices to people already working there as the government seeks to boost production, Prime Minister Vladimir Putin said in March.

The government plans to annul ownership rights to farmland that has been left uncultivated for at least three years.

Japan, the world's largest grain importer, said in April that it will help local companies invest in purchases and leasing of farmlands overseas to ensure stable food supply as the country lacks arable land. South Korea, the world's third-biggest corn buyer, plans to acquire a total of 380,000 hectares of overseas farmland by 2018 to grow crops.

The country is exploring possible investments with Southeast Asian nations in power generation, alternative energy and natural resource exploration as it seeks to boost demand for the commodities it produces, Slepnyov said.

"The center of world development is shifting to the Asian region," he said. "Of course, the region will become an even bigger energy consumer."

Russia's economy, which grew at an average of 7 percent annually in 2000-08, expanded 3.4 percent from a year earlier in the second quarter, missing economists' forecasts, a report showed late last week.