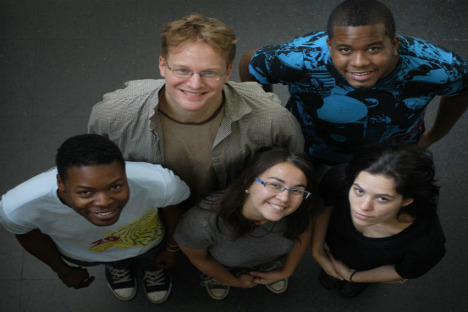 Although Russian universities do not rank at the top of ratings of the world’s best colleges, many foreign students from the United States and other countries still come to Russia to get educated. They choose to study in Russia despite the fact that Russian is not the most popular language in the world, the associate director of the Stanford-in-Moscow program at the Russian Academy of National Economy Alexander Abashkin believes. But although the number of foreign exchange students in Russia is growing, it is still minuscule in comparison with other countries.

Russia places eighth on the list of countries that export education, after the United States (586,000 foreign students per year), Great Britain, Germany, France, Austria, Spain and Canada, statistics from Russia’s Education Ministry show. Nevertheless, the ministry reports that the number of foreign students in Russia has grown over the past few years: while 2008 saw around 70,000 foreigners come to study here, there are currently about 90,000 international students in Russia.

The 2010 “Open Doors” report on international educational exchange issued by the Institute of International Education states that 1,798 Americans studied in Russia in the 2008 to 2009 academic year. This number “has remained fairly steady since 2003,” U.S. Embassy Officer Zsofia Budai said. “Anecdotally, we hear that Russian language and Russian area studies programs are popular among U.S. exchange students,” she added. For instance, 2009 saw more than 26,000 students enrolled in university-level Russian language courses in the United States, a number that has seen steady growth since 2002.

“Russia has always been a somewhat obscure country to many American students (there are a lot of myths and rumors surrounding its Soviet history), but it just made Russia more interesting to me,” said Rebecca Ramshaw, an American exchange student in Russia. She graduated from the University of Washington in Seattle last spring, and during the summer of 2009 participated in the Council on International Educational Exchange program studying politics and the Russian language for nine weeks at St. Petersburg State University. Previous communication with Russian exchange students and her keen interest in the language drove Ramshaw to study in Russia. “I had been studying Russian for two years before I went to Russia,” she said. “I chose to study it because I had met a Russian exchange student at my high school in the United States. We immediately became friends, and her culture fascinated me.”

Twenty-four-year-old Estefania Netri, an exchange student from Argentina, came to Moscow for a different reason. “My grandmother is Russian, and my grandfather studied in Moscow 40 years ago,” she said. “They encouraged me to come to Moscow because of the high level of education at the People’s Friendship University of Russia. I was happy to finally get acquainted with the land of my relatives.” Supported by the Russian Embassy in Argentina, Netri won a scholarship to study Russian philology.

Netri has been in contact with Russian culture since childhood, and she thus adjusted to the Russian lifestyle easily. However, the linguistic barrier remained a problem for her for a while. Likewise, Ramshaw was puzzled by language difficulties and communication problems.  “It was my first trip to a non-English speaking country without my family,” she said. “I wasn't very confident in my Russian-speaking abilities, and I constantly felt like an outsider. Sometimes I felt like I was living in a small bubble that included only me. America has a reputation for being overly polite and friendly; so it was somewhat difficult to adapt to a seemingly less friendly atmosphere.”

Study abroad programs usually have a great impact on the students. Ramshaw changed her mind about Russia and became more independent and confident about her future occupation. Having studied here for two months, she figured out that “Russians are the most hospitable people” she has ever met. “I have a theory that everyone has ‘That One Place,’ the place that they, for an inexplicable reason, are fascinated by. For me it's Russia,” she said. Ramshaw is currently preparing to join the Peace Corps to teach English at a Russian-speaking community in Eastern Europe. Netri would also like to popularize Russian language and culture among kids and adults in her hometown Rosario in Argentina.

But although interest in the Russian culture among Western students is growing, the lack of grants and available exchange programs sponsored by the Russian government remains a problem. Europe and America still offer more scholarships for foreign students. The U.S. Embassy in Moscow does offer U.S. government-sponsored exchange programs in Russia, such as Fulbright, which are funded by American taxpayers and bring more than 70 U.S. citizens to Russia every year. But these numbers seem like just a drop in the sea.

Throughout history, Russia’s Education Ministry has supported international students from the CIS, and those who have relatives in Russia, but not American or European students. However, starting this year Russia is going to launch an experimental project by giving foreigners from outside the former Soviet Union government-sponsored grants. “About 39 foreign students, including eight Americans, are expected to participate in this project at the Russian Academy of National Economy," Abashkin said.