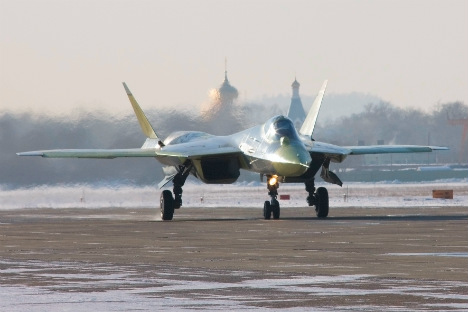 Putin will be one of an estimated 600,000 visitors to pass through the gates of the Zhukovsky airfield outside Moscow during the five-day biennial aviation show, which opened Tuesday.

Organizer AviaSalon expects about $10 billion worth of deals to be sealed during the air show.

The highlight of the week will be the unveiling of the stealth T-50 fighter, billed as Russia's answer to the U.S. F-22.

But the plane has suffered from delays, its engine still needs a redesign, and its development is lagging behind rivals. The F-22, meanwhile, is set to be replaced by the F-35 joint strike fighter.

The T-50 is being jointly developed with India, one of the world's biggest arms importers and an important customer for Russia. United Aircraft Corporation president Mikhail Pogosyan said he expected the two countries to be the main buyers of the aircraft.

"We think we will start taking orders by 2015. To start with, most of the interest will be from the Indian and Russian defense ministries," he told reporters Tuesday.

Nonetheless, the Russian government's drive to re-equip its Air Force means good news for domestic military aviation. Pogosyan said he expects to deliver 20 planes per year to the Air Force for the foreseeable future.

Matters are marginally more optimistic on the civilian front, where Pogosyan said his corporation expected to sell up to 100 civilian aircraft, including Sukhoi Superjet 100s, during the air show.

His subsidiary Sukhoi Civil Aviation builds the new regional jetliner and is responsible for sales in the former Soviet Union and Asia. SuperJet International is a Russian-Italian joint venture that is responsible for selling and supporting the jets to the rest of the world.

Sukhoi said Tuesday that it had signed an agreement to sell 12 Superjets to Indonesia's PT Sky Aviation with a list price of $379.2 million. Superjet International signed a 10-year agreement to maintain the aircraft for the Indonesian airline.

Superjet International chief executive Carlo Logli said he expected to sign "several more" deals over the next few days, but declined to name customers or put a figure on the number of planes involved.

Like the T-50, the Superjet carries great significance as a symbol for the rebirth of the Russian aviation industry. The Superjet is the first new airliner to be developed domestically since the Soviet collapse.

But it has been dogged by production delays — something that Logli put down to the excessive perfectionism that he said was necessary given the scrutiny the plane would come under.

"First, the plane must be perfect because people are always going to be looking for the slightest problem because it is Russian," he said when asked about his priorities for the next few years. "I want to destroy the last vestiges of that mind-set.

"Second, we have to increase production. That's easy on paper but more difficult in practice," he said.

Logli said customer confidence returned when the first Superjet went into service with Armavia in April and with Aeroflot in June. It has already received Russian certification, and EASA certification is expected to follow later this year.

Sukhoi said it has firm orders for 170 aircraft but is producing just 12 jets this year at its production center in Komsomolsk-on-Amur. The company plans to turn out 40 Superjets a year by 2013, and sell 1,000 over the next decade — with the United States as the biggest potential market. The former Soviet Union could absorb "about 200" of the aircraft, Logli said.

Other aircraft making their Russian debut at MAKS include Boeing's 787 Dreamliner, made of composite parts and boasting unique Russian-built titanium components.

Parked alongside the Dreamliner is archrival Airbus' giant A380, which looks improbably large even among the big Soviet-era transport planes that loom nearby.

The two aviation giants are battling each other for the Russia and CIS aviation market. Aeroflot ordered 22 Dreamliners last year, which are expected to be delivered in 2016.

The CIS market overall will generate about $110 billion in sales of 1,100 aircraft over the next 20 years as airlines expand and replace their aging Soviet-built fleets, Boeing country president Sergei Kravchenko told reporters Tuesday.

Russia will account for 800 of those aircraft, Randy Tinseth, vice president for marketing at Boeing Commercial Aircraft, told The Moscow Times. "About 75 percent of the demand we are seeing is for replacement aircraft," he said.

Transaero signed a statement of intent with Airbus to purchase eight A320 airliners with a catalog price of $729 million, with the option for another four.

Transaero has no Airbus-built airliners in its current fleet, relying largely on Boeing aircraft and a handful of Tu-214s.

Deal signing and corporate affairs will wrap up on Friday, when the show opens up to recreational ticket holders. The show runs through Sunday.

Armchair generals can inspect the latest in anti-ship missiles and a model of Russia's first armed drone, or UAV, and will be treated to fly-bys of classic Soviet and Russian aircraft.

This year's international guests include a contingent from the U.S. Air Force, who will show off a B-52 bomber among other aircraft.

Return visitors said the 10th MAKS is almost unrecognizable compared with its predecessors that began here 20 years ago.

"It's changed vastly," said Logli of Superjet, adding that he has attended seven of the shows. "Back then it was basically a national air show — there was nothing here. Now it is an international affair, and you've got Airbus and Boeing compelled to be present with their newest planes."

He said MAKS could start giving other international air shows a run for their money.

"It's on a par with Berlin. In some respects it might even be better than Berlin. Next time it could be on a par with Dubai," he said. "But Paris? Paris is a whole different league."