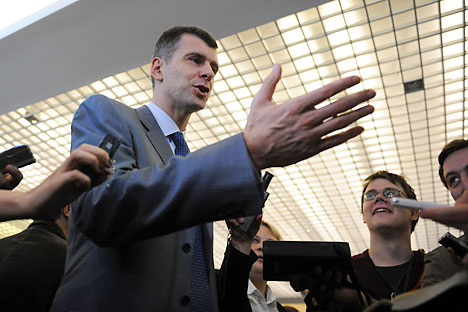 The billionaire leader of Right Cause is promoting visa-free travel to Europe and replacing the ruble with the euro as his party's top priorities heading into December's State Duma elections.

Visa-free travel to Europe and replacing the ruble with the euro will be two campaign pledges for the pro-business Right Cause in the State Duma elections, according to its billionaire leader Mikhail Prokhorov.

Prokhorov, shedding light on his campaign platform for the first time at a news conference, also showed a streak of independence, praising the Georgian authorities and reiterating that he wants Vladimir Putin's job as prime minister — if given free rein on policy.

But analysts said Prokhorov's rhetoric was an attempt to attract votes, not mount opposition to the political establishment. However, several analysts said the authorities may be starting to second-guess their support of Prokhorov.

Mikhail Prokhorov – the billionaire leader of the Right Cause party – looks to create a new national elite. This is the main goal of the Made-in-Russia project the businessman recently presented. As stated in Prokhrov’s address to Internet users, it will bring together talented people in Russia who constitute "the future political and business establishment of the country." Right Cause spokesmen officially claimed that Made-in-Russia has nothing to deal with Prokhorov’s political activities, but experts treat the project as a pre-election move. Some heroes of Made-in-Russia are already known. They include Nikolai Fomenko (president of Marussia Motors and head of engineering department Marussia Virgin Racing team), Eugene Kaspersky (CEO and co-founder of Kaspersky Lab) and Maxim Odnoblyudov (CEO & President of Optogan Group).

"We need to get back to the plan to create a big Europe from Lisbon to Vladivostok," Prokhorov said. "Russia needs to make a daring strategic step toward Europe by joining the Schengen zone and the eurozone."

The idea of a "big Europe" was, incidentally, first spelled out by Putin in an article for Germany's Sueddeutsche Zeitung daily last year. His proposal, however, referred to obstacles to Russia's entry to the World Trade Organization that he wrote were raised by Western countries.

Prokhorov said the switch to the euro would provide a better safety net for the savings of the populace, including pensioners, than the ruble, which "can never even become a regional currency because it depends on oil and gas prices."

The "big Europe" concept will be throughly explained in Right Cause's platform for December's Duma vote, Prokhorov said, adding that it would be published for public review shortly before a party congress in September.

Prokhorov also offered advice on which mix of currencies to keep as savings. But the clear attempt to reach out to the man on the street might have come out bungled because he proposed to "keep two years' worth of spending in the national currency and split the rest equally between dollars and euro." With the average monthly salary in the country standing at 20,300 rubles ($680) as of May, two years' worth of spending amounts to some 480,000 rubles, which far exceeds the savings of most voters.

Prokhorov also confirmed that he has his eyes on the top Cabinet seat, but said he would only take up the job if the president — whoever it might be — would support his proposals.

In warm words directed at Putin and President Dmitry Medvedev's arch foe, Prokhorov praised President Mikheil Saakashvili— although not by name — for implementing successful anti-corruption measures. "The most corrupt republic of the Soviet Union has basically gotten rid of corruption," he said.

He also dwelled on recent backlash against a campaign to promote his persona by raising some 900 billboards nationwide for his new web site, made-in-russia.ru. While formally unrelated to the Duma campaign, which does not start until the fall, the billboards adorned with Prokhorov's visage are widely seen as an election stunt. About 230 of them have been removed in Novosibirsk and Yekaterinburg in recent days.

Prokhorov denounced the removals as "imbecility" and said they were ordered by local authorities loyal to the ruling United Russia party. He declined to detail the cost of the campaign, but promised to sue officials in the regions where billboards were taken down and identify them on Right Cause's web site.

United Russia was quick to slam Prokhorov's European integration proposals. "Prokhorov himself may have joined the euro zone, but nobody has invited our country to join," senior official Yury Shuvalov said sarcastically.

"Even if we were invited, this absolutely doesn't mean we should gladly accept the invitation" because it would endanger Russia's sovereignty, Shuvalov said, Interfax reported.

But Alexei Mukhin, an analyst with the Center for Political Information, said the euro-zone proposal was a clever move to reach voters beyond the party's core liberal constituency. "While the liberal public will admire the idea, it will also find support among the older generation, who know even without Prokhorov that it is better to keep savings in the euro" than the ruble, Mukhin said.

Still, he conceded that voters still saw Prokhorov — whose net worth is estimated by Forbes magazine at $18 billion — as an oligarch, a term denoting a corrupt, government-linked capitalist.

Prokhorov, 46, who had no political experience prior to being elected the leader of Right Cause in June, has promised to give his party the second-biggest faction in the Duma with 15 percent of the vote. He has a way to go in the remaining 3 1/2 months because support for the party still hovers around 2 percent, according to recent polls.

Right Cause's aggressive campaigning is a good start, but it may backfire by sparking the ire of officials at various levels of the "power vertical" despite the party's Kremlin ties, analysts said.

The party was created in 2009 as a pro-Kremlin project to unite liberal voters. Medvedev, a self-professed liberal himself, met with Prokhorov shortly after he became Right Cause leader and praised some of his ideas.

But the removal of his billboards indicates that Right Cause may have ruffled feathers of members of the ruling elite, which largely sees Prokhorov as an audacious political upstart, said analyst Mark Feigin.

"They may be irritated that Prokhorov is an ambitious and rich man who might go too far, and they want to hold him down a bit," Feigin, who is a member of the Solidarity opposition movement, said by telephone.

Right Cause might follow the fate of the left-leaning Just Russia party, which was established in 2006 with the Kremlin's blessing as a spoiler to the Communists but fell out of favor this year when it started draining votes from United Russia instead, Feigin said.

Moreover, Medvedev's support of Prokhorov will not sit well with Putin, still the senior member of the ruling tandem and the leader — though not a member — of United Russia, Mukhin said.

Prokhorov "might feel enthusiastic because of this support, but it could provoke rivalry from Putin, who is in charge of the construction of all parties in the country," Mukhin said.