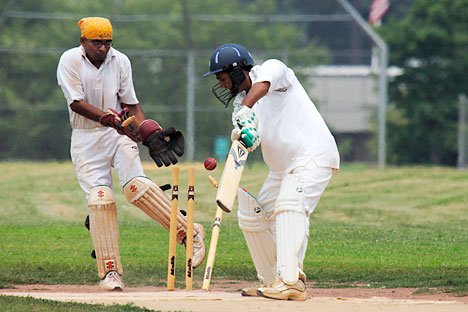 It was a fairly typical game of cricket in Russia. The game was being played on a baseball diamond, almost all of the players were Indian or Pakistani, and one passer-by asked, in all seriousness, whether they were actually playing squash.

Despite that, local cricket fans hope that this year Russia will become a signed-up member of the cricket world, as part of a plan to spur an improvement in sports’ fortunes.

In the baseball stadium at Moscow State University, a 20-over match was being played last Sunday between the Russian Cricket Club and the Moscow Cricket Club, whose initials match rather optimistically the initials of England’s most prestigious club, the Marylebone Cricket Club.

The match was the semifinal of the United Cricket League, made up of eight teams that battle one another each summer. A noisy crowd of about a hundred cheered and roared as every ball was bowled.

A man and woman attracted by the noise wandered past. “I have no idea what that is,” the man said. “It looks a bit like lapta.”

Lapta is a traditional Russian bat-and-ball game that dates back to medieval times.

Set up in 2000, the local cricket league brought together Moscow’s cricket fans, mainly from the subcontinent as well as England and Australia.

“We have a rule that every team must feature at least one Russian player, but it’s difficult to enforce,” said Sampath Kumar, one of the league’s founders who works as an advertising executive. “Occasionally people come and play, but they struggle. We have played cricket our whole lives, and the Russians don’t really understand the game. What they need is to learn from a young age or have training.”

The International Cricket Council, or the ICC, which governs the international game, visited Moscow in June and gave Russia the green light to become a member. This, the league members say, will help it grow and attract more Russians to the game.

“From September, we are going to start coaching Russian students in four schools in Moscow,” said Ashwani Chopra, head of Cricket Russia. “Once everything is confirmed with the ICC, we will start full-time coaching and will send people to England to get their badges.”

Still, there are few Russians who understand and appreciate the game. Sitting in the stands was Natasha Frankova, wife of John Yadav, coach of the RCC team, “Of course, I understand the rules. I can even play, but only batting,” she said. “I like cricket because there’s so much going on — bowling, batting, catching, it’s very technical.”

On the pitch, PR professional Sasha Sorokin, 28, is a regular for the RCC team.

“My parents are diplomats, and we moved to India when I was 10,” he said. “I have always loved sport and used to watch cricket on TV. I started playing with our security guards and loved it. When I was 13 my parents sent me to an international school in India where I played with English and Indian kids.”

Both Sorokin and Frankova admitted that it was hard to interest their countrymen.

“Sadly, very few other Russians understand it. Before the Russian Revolution, cricket was popular here because there were a lot of anglophiles,” Frankova said. “But it was mostly aristocrats who played, and the Bolsheviks decided that it was a bourgeois game and banned it after 1918. Now it has returned, but only through expats.”

Sorokin hopes that the ICC may help the game gain popularity.

“Most of my Russian friends don’t really know what cricket is. Russians start playing a sport when it becomes fashionable, when there are adverts. Eurosport doesn’t show cricket, so sadly Russians don’t watch it now,” he said. “When it gets accepted into the Olympics, I think that people will start playing. If the ICC let us join, maybe we’ll have more people next season.”

The hundred-or-so fans who came Sunday got to watch a batting master class as one player, Mohit Sharma, made hay with the bowling, scoring 113 runs.

“Every year, we invite a professional for a few weeks to come and coach us and play for us,” said RCC coach Yadav, who is Indian-born and now a naturalized Russian. “He can show us a lot of things that you could only find out from a pro. We didn’t bring him over just to win games for us; we want to improve cricketers as much as we can.”

Nevertheless, Sharma, who has played for top Indian side Delhi, helped RCC win the game convincingly by 80 runs.

The cricket season will continue next Sunday with the 30-over semifinals and final followed by the fiercely contested Mashes, or the Moscow Ashes, played between British and Australasian expats on Aug. 27.