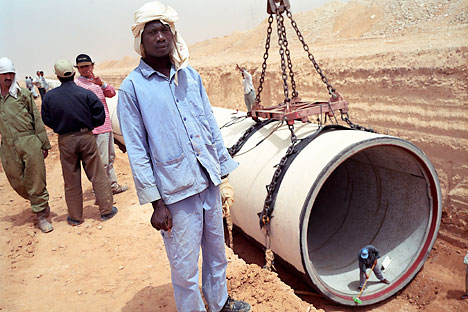 Russian companies are involved in a number of gas projects in Africa. Photo: Laif/ Vostock Photo

Russia is losing ground to China in developing the African market, although the continent has some of the world's fastest-growing economies.

Jimmy Saruchera’s company, Schmooze Frontier Markets, (www.schmoozefm.com), works to support small-and-medium sized businesses in new emerging markets. A native of Zimbabwe, Saruchera’s experience as an entrepreneur has stretched from New Zealand to the UK, hitting many points in between. He spoke with Kester Kenn Klomegah from Buziness Africa about practical ways to improve Russian-African economic relations.

Buziness Africa: What are the real benefits of investing in African market after having worked there, in a number of countries, all these years? Do you think African policies are favorable enough to attract foreign investors?

Jimmy Saruchera: I think one of the biggest immediate benefits is the abundance of significantly undervalued companies relative to any other region in the world. A lot of these companies are not just undervalued, but they have a lot of room to grow. This investment “discount” is in part due to unbalanced global media coverage that paints the whole continent with the same brush of famine, war and disease.

In spite of recent developments in Somalia and Libya, the reality on the ground is that the vast majority of African countries have enjoyed several years of rapid economic growth and political stability. According to the Economist Intelligence Unit, in the 10 years [leading up] to 2010, six of the world’s 10 fastest-growing economies were in sub-Saharan Africa, and over the next five years the average African economy will outpace its Asian counterpart. I wouldn't say investing in Africa is for the faint-hearted, but if you can stomach a bit of volatility, there's no reason you should not have it on your radar. Ultimately, as in any place in the world, doing stringent due diligence helps.

B.A.: Considering emerging economies, China is active on the African market and Russia is comparatively not. What do you think what are the reasons for this investment disparity?

J.S.: I would say that China has been a lot more proactive than Russia, driven in part by China's requirement for resources. However, natural resources are just the tip of the iceberg, and Chinese companies have strategically embraced Africa as a real market in retail, construction, consumer goods and many other sectors.

Chinese companies looking to expand abroad face stiff competition from well-resourced, well-established companies in the U.S. and Europe. In Africa, local competitors do not have as much muscle. The Chinese have also realized that it’s a myth that there is no buying power in Africa. African households currently buy $31 billion more than Russian households in consumer goods, and $220 billion more than India, which has a similar sized population. Brazil for example, does $25 billion in trade with Africa, mostly in exports (about half of what it does with China).

B.A.: Do you think Africans trust Chinese investment more than Russian? In your opinion, how do Africans perceive China and Russia in terms of economic engagement?

J.S.: I would say that Russia has a similar perception advantage in Africa as China, relative to western nations. Both countries are viewed favorably because of their historical support for independence movements against colonialism. In the case of Zimbabwe, both China and Russia vetoed the UN resolution imposing UN sanctions on Zimbabwe, which was proposed by both the U.S. and the UK in 2008.

So, I wouldn't say Africans trust Chinese investment more than Russian investment necessarily, it's is only that the Chinese have been more proactive and consistent in engaging Africa as an economic partner. African governments and their populations are fully aware that natural resources are a major attraction, and are wary of being exploited as has happened in the past. Therefore it's important that Russian and other investors show that their investment and participation in African economies will have a positive social and economic impact on communities.

B.A.: What then might be the key problems when talking about Russia-African economic cooperation?

J.S.: I think there are two key problems: first, visibility of opportunities on both sides. With little information on the available opportunities, there can be little economic cooperation. Secondly, there are insufficient, inconsistent and lack of strategic efforts to foster trade and investment. But now this looks to be changing slowly, as Chairman of the Foreign Affairs Committee of the Federation Council of Russia and Presidential Special Envoy for Africa Mikhail Margelov, just a few weeks ago was the first top Russian economic official to visit Zimbabwe in a decade. His primary agenda was trade and investment, so it looks like the the Russian government is aware of the need to improve economic engagement with Africa, but it is still far behind engagement from India, China and Brazil.

J.S.: I think the market is unknown to most African businesses, and maybe is seen as a difficult market to break into. Further to that, I’m not sure to what extent African embassies in the Russian Federation have well resourced commercial arms or sections to help with market entry.

Firstly, it is worth taking the effort and time to understand the market, Russia has the highest per capita income of the BRIC countries, a grouping which many African countries are already looking to engage more on the economic front. I think the most efficient way to understand the market is for African embassies in Russia to share general market information on Russia, to save them duplicating the same process.

Secondly, I would say it would be prudent to start with the "low hanging fruit" or areas with the easiest synergy. Two examples of these are exporting African tourism to the Russian market, which is a huge reservoir of potential tourists with rising income; and exporting Russian power and energy expertise to Africa.

B.A.: In early August, Russian President Dmitry Medvedev appointed "economic and business obudsmen" to help identify and develop business in the regions. Do you think African embassies here in the Russian Federation should move out of their traditional conservative representation and do more looking for markets for African products and new investment? What do you suggest and in which direction should these embassies work to promote economic diplomacy?

J.S.: I think the embassy model of African states needs to be reformed to improve trade and investment, taking into account, the emerging economic opportunities in the region after the collapse of the Soviet system. While some African embassies have taken the positive step of appointing, for example, a commercial attache(s), this does not go far enough as these staff are often stretched between multiple industry sectors and can only provide superficial support for businesses.

There needs to be more African trade commissioners - senior embassy staff with practical business background and adequate knowledge of the business landscape who have a level of authority almost at the level of an ambassador. The commissioners should be able to engage senior members of the host country government and businesses substantively on key trade and investment issues. Below this person, should be a team with sector specializations that mirror the key strengths/areas of trade and investment synergy between Russia and the specific African country.

B.A.: Now, your suggestions as to what Russian authorities should do in Africa to match that of China and India? Would you also recommend that something similar to Africa Growth and Opportunities Act (AGOA) and RUSAID, a Russian version of USAID for Russia to get connected with Africa?

J.S.: There are many different views about AGOA. In my view, I think AGOA is a good initiative that has resulted in trade benefits for a number of African countries. However, I think Russia can go one step further and make sure that any AGOA type agreement is drafted in partnership with African countries. AGOA is undermined by the fact that African countries had little/late input into it. With regard to RUSAID, I would categorically say no, that is not the way forward to engage Africa.

The growth you are seeing in Africa is not because of aid, it is because of businesses and entrepreneurs in Africa creating wealth and employment. Africa in the 21st century does not want charity, but wants to be an economic partner. Russia should learn from Western mistakes, and focus the overwhelming bulk of its Africa targeted resources at investment and trade. Government can also play a role in developing cultural ties, which shouldn't be underestimated in developing trust, a key ingredient for trade and investment between nations.

This interview first appeared at BuzinessAfrica.com and is reprinted with their permission.