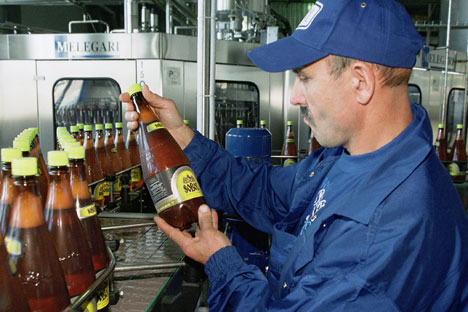 Multinational brewers and small kiosk owners alike are already bracing for new restrictions on beer sales, scheduled to come into effect in 2013, but there could be a silver lining for microbreweries.

Brewers in Russia are expecting a major jolt – this summer, the Duma finalized policies promoted by President Dmitry Medvedev that designate beer as an alcoholic beverage and restrict sales. While this distinction may come as no surprise to beer drinkers in other parts of the world, until now, the intoxicating drink was considered a food product in Russia, making it possible to buy or sell beer with little to no restriction on time, place or age.

Over the past 15 years, beer consumption in Russia has grown fourfold according to Dmitry Dobrov, head of Russia’s Union of Liquor Producers. Research by consulting company ID-Marketing shows that between 2000 and 2009, beer production in Russia doubled to 1.2 billion deciliters (1 million barrels), which made the Russian beer industry the third largest in the world in terms of sales, after China and the U.S. Russians are in the widespread habit of drinking beer instead of soft drinks, since they are about the same price, about 30 rubles ($1) per bottle. Brewers themselves link this trend to the growing popularity of beer among youth.

Substance abuse professionals now believe there is a growing problem of alcoholism among teenagers as a result of beer drinking and in response, restrictions have been imposed on beer ads. Additionally, in 2005, a ban was imposed on the sale of beer to minors under the age of 18. However, the ban has been poorly observed and beer consumption has continued to rise. According to Chief Narcologist Evgeny Brune, almost all teenagers in Russia between the ages of 15 and 18 consume beer. Brewers, fearing more drastic government measures, later began exercising restraint in their advertising and launched a campaign to support compliance with the ban on beer sales to minors. But it was too late.

New restrictions coming into effect in 2013 are largely similar to those currently in use in many countries in Europe and in the U.S. Sales of beer on the street will be completely prohibited. Following the lead of the Baltic States, the sale of hard liquor will be forbidden at night between the hours of 11 PM and 8 AM. It will no longer be permissible to drink beer in public places, or virtually anywhere except for residences and restaurants. But the most important restriction is the complete ban on beer ads – on television and outdoors. “Beer sales in the last ten years have increased due to persistent advertising,” said Pavel Shapkin, head of the Center for the Development of a National Alcohol Policy.

For Russia, these moves seem radical, especially in light of the fact that starting in the 1920’s, beer was not considered alcohol. At that time, the alcohol content of beer ranged from 1 percent to 3 percent, and people drank small amounts just to quench their thirst in the heat. Mass production of cheap beer in the Soviet Union began in the 1970’s when the government wanted to reduce the consumption of vodka. By that time, the alcohol content of beer had increased to 3.2 percent to 4.5 percent, and the culture of consumption had changed: Russians got together to drink at night and continued to drink in the morning.

In the 1980s, Mikhail Gorbachev launched an anti-alcohol campaign. He used a simple tactic – he closed the majority of wineries, vodka distilleries and liquor stores. For all the shortcomings of Gorbachev’s campaign, between 1985 and 1988, consumption of alcohol in the Soviet Union fell by approximately 27 percent and male mortality rates immediately declined by 12 percent. The new restrictions are not as radical, but authorities in Russia today also hope to lower the rate of alcohol-related fatalities. According to the World Health Organization, currently one in five people in Russia dies from alcohol abuse, compared with the world average for men of 6.2 percent.

But this attempt at saving lives could kill small businesses. Street sales currently account for about 25 percent of all beer sales. Opora Rossii, a national organization for small businesses, says that the owners of street kiosks will lose about 40 percent of their revenue and many will be forced to close, which runs counter to statements made by the country’s leadership in support of small businesses. Additionally, beer manufacturers may take a hit, and the Union of Russian Brewers believes that the law in its current form “will not reduce the scope of alcohol consumption.” According to brewers, the problem behind alcoholism lies in Russian citizens’ social discontent, and new restrictions won’t solve that. In addition, they argue that consumers in small towns will be unable to purchase beer altogether due to undeveloped commerce systems.

Maksim Klyagin, an analyst at investment company Finam, believes that the new rules will not significantly affect the beer industry, 85 percent of which is controlled by five major international companies: Carlsberg, InBev, Heineken, Efes, and SABMiller: “They will just completely switch to selling at retail stores,” Klyagin said.

Vadim Drobiz, director of the Center for Federal and Regional Alcohol Market Studies, doubts that the new rules will reduce the consumption of beer overall. “The ban on beer sales at kiosks in Belarus, introduced a year and a half ago, has not reduced beer consumption, and it has actually increased," said Drobiz. "And in Sweden and Finland, which have state monopolies of alcohol sales, restrictions have not reduced alcohol consumption at all. Over the last 20 to 30 years, alcoholism there has increased," he added.

Nevertheless, according to a recent poll by market research holding Romir, labeling beer as alcohol will lead 10 percent of Russians to give it up entirely, and another 17 percent of citizens plan to purchase less beer.

A silver lining for small breweries

Klyagin says that the only potential beneficiaries of the new law among businesses will be microbreweries, which have begun to appear everywhere in recent years. Currently, major manufacturers account for 90 percent of the beer market, according to Shapkin. Those bottled beers are full of additives, whose impact on the body Chief Narcologist Brune compares to “chemical warfare agents.” Meanwhile, in Germany and the Czech Republic, freshly brewed beer accounts for a large portion of consumption. In recent years, Russians have been trying fresh beer, according to Klyagin, and the demand for it will only grow. But this market is largely dependent on beer gardens and beer restaurants, which are still in their infancy in Russia. It will grow as the general public’s income increases, but for now, Russians are not in the habit of going to cafes and restaurants regularly, says an analyst at Finam. Anatoly Zhamaldinov, director of Russia’s Tinkoff Brewery, believes that it’s still too early to discuss the possible benefits of beer restaurants, since administrative barriers to opening them remain. Nevertheless, said Shapkin, “As a result of the new law, advertising for major brands will go away, and small breweries will have a serious opportunity to grow.”