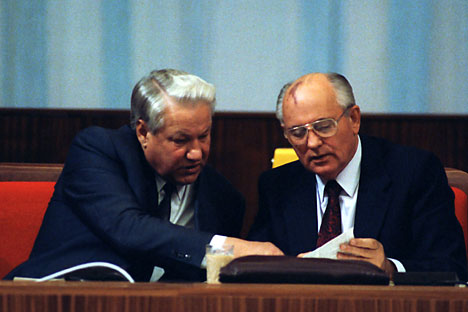 Boris Yeltsin and Mikhail Gorbachev at the extraordinary fifth session of Peoples' Deputies of the Soviet Union On the 3rd Septemberб 1991. Photo: ITAR TASS

An American diplomat on the ground in 1991 explains why pushing back the reactionary coup 20 years ago was the easy part.

Twenty years ago in Moscow popular opposition defeated the reactionary putsch intended to turn back the clock of reform in the dying Soviet Union.  The experience was, initially, similar to the recent ‘Arab Spring’.

The putsch failed quickly, sparing Russia a trauma like Syria or Libya today.  Crucially, the Russian armed forces remained professional, sparing Russia the militarization of politics seen in Germany in the Twenties or Yugoslavia in the Nineties.  Yeltsin jettisoned the past quickly – both the Communist Party and the Soviet empire – to focus Russian efforts and resources on Russia’s future.  Doors previously closed to the outside world were opened for Russians to explore new lands and ideas.  Freedom of speech and the media attained heights never seen in Russia before or, sadly, since.  Youth was welcomed into the halls of power.  The Cold War, radically scaled back by Gorbachev, was abandoned.   Russia turned West and sought a genuine European identity.

It is vastly easier – and surer – to tear down a poor edifice than to design and build a replacement.  The vacuum of power at all levels and in all fields attracted both the best and the worst, with the former a distinct minority.  Youth and former dissidents demonstrated their talent at debate, but not at organization, administration or compromise.  Ideologies and reform experiments imported from the West – especially in economic stabilization – often proved woefully wrong for Russia and deepened the damage left by the Soviet collapse.  Economic failures tarnished nascent efforts at political reform.  This led to a vacuum of democratic legitimacy and ultimately to the restoration of the ‘vertical of power’:  neither neo-Soviet nor proto-democratic.  A genuine threat to Russian integrity in Chechnya provoked a cure worse than the disease.  As Aleksandr III once declared Russia’s only friends were its army and navy, today the state rests on the pillars of oil and gas, which corrupt even as they enrich.

Why did things go so wrong?

Seven decades of Soviet misrule infected almost every field of public policy:  agriculture, industry, energy, investment, infrastructure, security, politics, civil society, religion, health, education, media.  The Soviet Union was not so much under-developed as critically mis-developed, with fundamental reform needed in every sector.  Where to start?  Historian General Dmitriy Volkogonov once told me that many good people were needed in every field, but there simply were nowhere near enough to go around.

Expectations of a new and improved standard of living – “to live like normal people” – were high while understanding of the challenges was low.  How do you quickly reform an economy lacking even double-entry bookkeeping to know whether an enterprise adds or destroys value? Few Russians were as willing as their Chinese counterparts to learn from the outside world, while many continued to believe “here is better.” The old ways and attitudes remained resilient.

Russia did not take part in the transformation of former Warsaw Pact states, in part because Europe could not afford it, but in large part because Russia chose not to.  European integration requires significant surrender of sovereignty and of pretensions to Great Power status.  Russia took a go-it-alone approach that deprived it of many benefits of a global economy.  Russia remains today an outlier in most fields, by choice.

Russia’s reforms – even under Yeltsin – were less radical than they appeared.  Elites preferred ‘managed democracy’ to rule of law.  Political parties never matured, while a free media withered.  Russians today enjoy vastly greater freedoms than did their parents, but these are personal freedoms divorced from genuine political liberty. Russians know the difference and judge their leaders on the basis of material progress rather than legitimacy.  Millions of the most talented younger people have sought new lives abroad.  Their loss reflects the continuing alienation of Russia’s ruling elite from its own people – an old Russian story.

Finally, the outside world, including the United States, was timid in engaging the new Russia to fulfill the rhetoric of a “Europe whole and free”.  Europe and America welcomed the demise of Cold War institutions in the East, but maintained them in the West, especially NATO.  As reforms failed in Russia, Western advocates of unworkable policies – the “Washington consensus” – blamed the failures on inherent Russian dysfunction rather than on bad policies.

Some observers of Russian affairs, both at home and abroad, believe the country is approaching another historical turning point, perhaps a revolutionary shift. If so, the ‘Russian Spring’ of the early Nineties teaches that revolution is easy, but reform is hard.  Discarding the Soviet past required courage, enthusiasm and hope.  Building a better Russia demanded realism, patience and stamina – and still does.

E. Wayne Merry was the American Foreign Service Officer in charge of reporting and analysis on Russian domestic politics at the United States Embassy in Moscow, 1991-94.