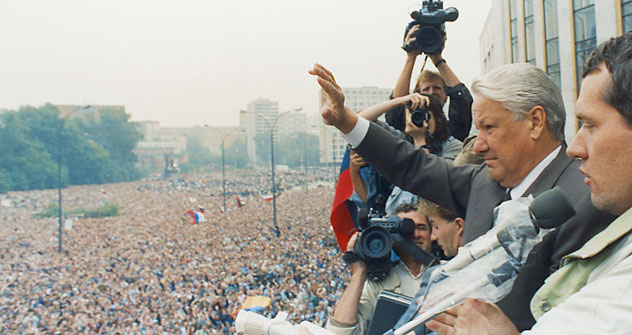 Two decades have passed since the Soviet Union began to fall apart, but Russia is still stuck in the past.

Twenty years have passed since that day, Aug. 19, 1991, when the news spread across the globe: “There has been a coup d'état in the Soviet Union."

In reality, all the changes in Russia that began in 2000 when Vladimir Putin came to power could be forecast as far back as the day Boris Yeltsin stood on a tank. No matter how daring the hopes of that August, it was to be expected that life, in the words of Joseph Brodsky, “would swing to the right after swinging to the left.” And so it happened that the pendulum of Russian history swung from exciting reforms to the post-reform hangover; from the destruction of an ideology, to its partial restoration and modernization.

After August 1991, it seemed to some people in Russia - including those who were at the top levels of power - that if we only took an axe to the visible signs of the Soviet epoch – the hammer and sickle, flags with the red star, portraits of Lenin – the country would be transformed overnight. Even today, some people are inclined to think that the reason the country has returned to some Soviet-style methods of governing is only because 20 years ago, the country failed to settle accounts with its totalitarian past. For example, those who worked in the Soviet security services or held leading positions in the Communist Party were not deprived of their rights and continued to work in government. Although there were talks at the time about enacting such a ban, no such plan came to pass. And thank God, because this kind of action would have led to a split in society. But is also was an indication that the country wasn’t ready to draw a decisive, unambiguous line under its totalitarian past and that is why even today the longing for "order" is still present in society.

August 1991 marked the beginning of the Yeltsin era. Now this era is called simply the 1990s, and it was replaced by the era of Putin – the era of stability. The landmarks of this period are as follows: the end of the hopes and illusions of the first post-Soviet years; the crisis of ideology and persistent yet futile attempts to find a national idea; the strengthening of the state and all its institutions by the creation of the vertical of power; the increase in nationalism and its metamorphosis into xenophobia.

Putin’s high approval ratings combined with high oil prices should have made it possible to start actual reforms, but no concerns – not the problems in the pension system, in the sphere of housing and communal services, the administrative management, nor the army – have ever been addressed.

How long will the current period last? The simplest answer is that it will end at the moment when the price of oil and gas falls dramatically. But it is too one-dimensional to believe that at this moment both the economic and social spheres will be free from the excessive attention of the government and everything will evolve. It may happen that if oil and gas prices do fall, it will trigger such an economic crisis that it will destroy everything that has been cultivated by state capitalism or "sovereign democracy” and we may again face liberal reforms in the mold of Yegor Gaidar and Anatoly Chubais. Reformation of the country will still continue one way or another, but with a reply to new challenges, to new politic, economic and social needs.

Will the movement towards real modernization begin after the presidential elections will take place in 2012? It must. Otherwise the stability achieved at the sacrifice of burning reforms will turn out to be an end in itself. The absence of any shock is merely a necessary condition for the reformative work.

Valery Vyzhutovich is a political commentator for Rossiyskaya Gazeta.