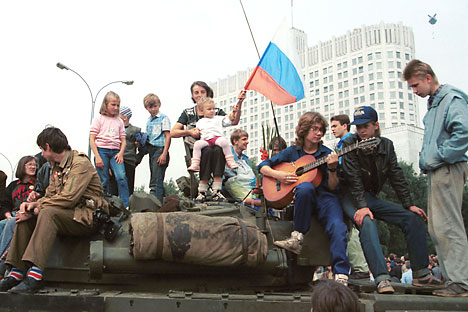 I’ve spent a lot of time recently editing stories on the August Putsch and the fall of the Soviet Union.  As I was searching for more information to add to a timeline I was creating, it struck me: In the summer of 1991, the chaos in the Soviet Union meant nothing to me at all. I feel like I was probably more aware of current events than the average 13-year-old, and yet, as I prepared to head back to school that fall, the region of the world most on my mind was the Middle East.

There was good reason for that. Earlier that year, the U.S. had invaded Kuwait in Operation Desert Storm. My uncle was serving there with the 101st Airborne, so the conflict felt a little closer to home. In social studies, we had drawn maps of the countries surrounding Iraq and memorized the names of regional leaders. I can probably still name every Arab leader from 1991 – of course, until this winter’s Arab Spring, most of them were still in power.

The fact that I remember nothing about the fall of the Soviet Union is to me a pretty clear indicator that I am on the leading edge of a generation of Americans for whom the primary foreign policy concern is the Middle East, not Russia.

The fact that Operation Desert Storm and the collapse of the Soviet Union occurred in the same year is quirk of history whose significance is recognized only in retrospect. These events mark 1991 as the year when the Middle East began to take over the space in American foreign policy and popular culture devoted to the Soviet Union. You might call it the space devoted to “the enemy.” This shift was gradual, but slowly the fear of the Arab world encroached upon the American imagination – starting with Gulf War I, moving through the 1993 World Trade Center bombing, the U.S.S. Cole attack, the bombings of U.S. embassies in Africa, until on Sept. 11 the appropriation was complete.

I have spent most of my career working for Russian media projects trying to explain Russia to a Western audience. One of the hardest things about this task is getting a Western audience interested in the first place. Why? Because today those in the West, Americans in particular, are focused on the Middle East. It’s difficult to get Americans to think of Russia in a new way when they barely think of it at all.

And yet my generation, those Americans whose adulthood has been framed by Sept. 11 and whose first tax dollars have supported the wars in Iraq and Afghanistan, is the generation that will determine the course of U.S.-Russian relations.  Maybe that’s for the best. We aren’t burdened by preconceived notions of Russians as “the other.” We don’t remember the fears of the Cold War; we never learned how to “duck and cover;” we never saw any famous athlete or artist defect and we probably never had the chance to study Russian language in school. To us, Russia is just another country in the world, maybe an exotic travel destination or an interesting place to do business.

For U.S.-Russian relations to move forward, it will take people on both sides who can truly take 1991 as a starting point, who recognize that Russia is not the Soviet Union. And maybe that means people for whom that year is insignificant. People for whom, as Jeffrey Mankoff wrote in a recent article for the Journal of International Affairs, “seminal events from the Cuban missile crisis to Ronald Reagan’s stirring call to ‘tear down this wall’ occupy approximately the same place in individual historical consciousness as the assassination of Archduke Franz Ferdinand or the Battle of Waterloo.”

I entered graduate school in 2002, at a time when many universities were abandoning Russian studies and Russian language programs in favor of programs in Arabic and Islam.  I trained as a Russian historian specializing in the post-Soviet period. I treated Aug. 19, 1991 as a date in history. Only now, reading some text about it as an historical event, did it occur to me that I actually lived through it. And maybe that’s for the best.

the post-soviet era gorbachev RIR Blogs Fall of the USSR