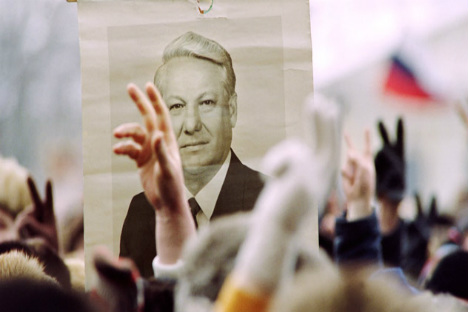 On the morning of August 19, 1991, very few people in Russia knew what was really going in Moscow, as state television was showing not the news of the Communist hardliners’ attempted putsch, but a performance of “Swan Lake.

A state of emergency was declared across the country, as army tanks were ordered by the State Committee for a State of Emergency (GKChP) to enter Moscow.

Then, the events were moving fast enough to confuse both sides of the coup – the putschists and The White House defenders.

Boris, a Moscow pensioner, recalls what happened that morning.

“In the morning of August 19, 1991, I went to buy milk at a dairy products kiosk – that’s where I learned that the tanks had entered Moscow. Then I went to my research institute where I worked back then. Everything was quiet and calm at work. Of course, we were discussing the situation with colleagues, but everything was very quiet,” Boris told The Moscow News.

Twenty years later, over one-quarter of Muscovites who remember those days believe that the August coup was good for the democratic development of Russia, but almost 40 per cent of Russians regard those events as tragic for the country, according to a survey by the Levada Center, a polling agency.

As most of the media in the country kept silent during the three days of the coup, only a very few people were involved in news production and distribution – Ekho Moskvy radio station and Moskovskiye Novosti newspaper were among the few media outlets working.

Yeltsin’s supporters wanted to see the triumph of democracy and did their best to make it happen.

Sergei Sorokin, a 39-year-old Muscovite, took part in the defense of the White House.

He told The Moscow News that there was a feeling of euphoria and hopes of a brighter future for everyone.

“I was right next to Boris Yeltsin’s tank, avidly listening to his words,” Sorokin said, remembering these days.

“I worked as a courier at the Moskovskiye Novosti newspaper back then, and this was my first day off. When I saw the tanks driving up Kaluzhskoye Shosse, I got back to the office.”

As Moskovskiye Novosti was one of the first newspapers to be shut down by the coup committee, the journalists did their best to still produce news articles and distribute them.

“We made A3-size leaflets, and distributed them among the crowd in front of the White House and near the metro stations. Vlad Listiyev was at our office too, he helped us a lot with the leaflets.”

But Sorokin now says that no one knew or thought it over what would happen next to the country.

“This mighty country has fallen and no one knew what was going to happen next, the whole [defeat of the] coup was based on enthusiasm. I cannot compare it to what the opposition is trying to do now,” Sorokin said.

Tens of thousands people were urged to join Yeltsin in the streets of Moscow to defend democracy. The protests took place in front of the White House, Lyubyanskaya Ploshchad and Pushkinskaya Ploshchad. Supporters of both sides even fought in the tunnel below Novy Arbat at Novinsky Bulvar, and three people died there.

Besides Yeltsin’s supporters, Muscovites now remember that thousands also supported the coup. According to the Levada poll, only 10 per cent of Russians believed that defeating the coup was a victory for democracy.

Rob Jones, a British socialist activist who was living in Moscow at the time of the coup, remembers the events of August 1991 well.

“I was living on Leningradsky Prospekt and I remember seeing all the tanks moving along it, stopping at the traffic lights just like any other car. I then went to Manezhnaya Ploshchad where all the people were gathered already in support of Boris Yeltsin. People hoped to stand up for their rights – they of course didn’t know what to expect, or what would happen to the country.”

Jones says he was against the coup, but agreed with those people who took part in the defense of the White House who are now disappointed with how the country has turned out.

“Look what the country is like now,” he said. “It should be embarrassing for people involved in the transition process.”

Some Muscovites said the coup organizers were on the right track.

“I remember the coup and I can say there were many memorable events – it was a huge political event that I’ve never seen in my entire life,” said one 60-year-old woman. “I believe this was a state counterrevolutionary coup carried out by Boris Yeltsin. My husband participated in the Committee and was at the right place in the right time.”

Mikhail, a 62-year-old Muscovite, said he thought the coup organizers “did their best to solve the problem of power in the country.”

Many people still see Gorbachev as a weak leader who let power slip from his hands.

“Gorbachev was never a political figure, but a pawn. He was just sitting there in [the Crimea] and waiting for news about would win this power struggle,” said Mikhail.

Even though many Muscovites took part in the August 1991 events, others got on with their lives as usual.

“We were discussing the events, trying to understand what was really going on in the country and Moscow. Life back then went on as usual, just some comrades and non-comrades were trying to share power,” said Boris, the pensioner.

He remembered that, while political figures like Yegor Gaidar was calling people to go out in the streets, Lyubimov from the Vzglyad TV program told everyone to stay home.

“Do not interfere, otherwise there will be a civil war, Lyubimov said then,” Boris said, adding that “20 years have passed and we all know what it led to.”

the post-soviet era gorbachev RIR Society Fall of the USSR