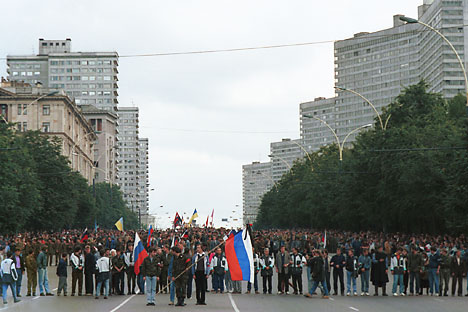 A former journalist and politician remembers the August coup.

Like many others on that memorable morning, I was roused by a telephone call:

“Turn on the radio," a colleague gasped into the receiver. “There’s a coup underway!”

I dashed over to the radio.

“Guided by the crucial interests of the peoples of our Motherland, all Soviet people,” the impassionate presenter read, “to introduce a state of emergency in certain parts of the Soviet Union for a period of six months starting at 4 a.m. Moscow time, 19 August 1991.”

I turned up the volume.

“A State Committee for the State of Emergency in the Soviet Union [GKChP] will be set up to govern the country and effectively provide for the state of emergency.”

When it came to Dmitry Yazov, the Soviet Minister of Defense, I remembered a conversation I had recently had with him. The minister was indignant when asked about rumors of an alleged military coup ripening in the Soviet Union. “Do you see another Pinochet in me?” he had said. “The army is part and parcel of the people. Shall I stage a coup against my mother? Or against the government? I am myself a member of that government. Against Gorbachev? Why revolt against him? Our deputies can decide and sack him if he is not up to the job. We are now in such a situation that we need no coup; we can achieve everything by constitutional means alone.”

On my way to work that August morning, I overheard the following conversation:

“Gorbachev is himself to blame, he loosened the grip. And I think these guys will tighten the screws…”

“Not bad, at least there will be order…”

The speakers were in their mid-30s, the same as me. They were the children of the Khrushchev thaw, they had barely tasted Gorbachev’s Perestroika yet they were already longing for a firm hand.

The printing office of Pravda Publishing House, where my magazine, Sobesednik, was published, received the State Emergency Committee’s order to “suspend until further notice” printing of all newspapers and magazines except Pravda, Red Star and seven other government-controlled editions. We vented our anger by turning newspapers into posters and leaflets. We photocopied them at our printing house and distributed them around Moscow and sent them to other cities by fax. When it became clear where the main frontline was, the leaflets were sent to the barricades outside the White House government headquarters.

Meanwhile, there was no reliable information about the whereabouts of the lawfully elected president of the Soviet Union.

Telephone calls and fragmentary messages arrived at the printing office from outside Moscow, showing growing confusion both among ordinary citizens and leaders at different levels. The most zealous hastened to swear allegiance to the GKChP, sending their “telegrams of support” to Moscow, but most politicians and company heads took a wait-and-see stance, using this or that pretext to avoid making statements.

Meanwhile, columns of tanks, armored vehicles and trucks of soldiers were rolling into the capital from various directions. Under their cover, the GKChP members gave a press conference for foreign and Soviet journalists at the Foreign Ministry’s press center on Zubovsky Boulevard.

Vice President Gennady Yanayev announced that Mikhail Gorbachev was in poor health, but his nervous and insincere overtones were clearly audible. During the coup, Defense Minister Yazov did not leave his office: with Gorbachev in isolation, he was the only one left in control of the Soviet nuclear arsenal. Like the rest of the country, the army was split, and Yazov did his best to keep the armed forces from becoming directly involved in the unfolding standoff.

At the same time, he knew that, apart from the army, there were also elite combat units controlled by KGB chief Vladimir Kryuchkov. He also knew that these units had received orders to advance on Moscow and those stationed in Moscow had been placed on alert.

During those three jittery days, no one could say for certain how events would unfold.

But what happened, happened: Yeltsin and his supporters stood on the top of the tanks surrounding the White House. Tank drivers on barricades, hugging local residents and laughing at the caricatures and rhymes mocking the rebellious generals. And two KGB divisions advancing on Moscow that were stopped halfway and turned back.

Alexander Yemelyanenkov is a commentator for Rossiyskaya Gazeta. During August 1991, he was Deputy Editor-in-Chief of the Sobesednik weekly. Two years before, in May 1989, he was elected to the first democratically elected Soviet parliament – the Congress of People’s Deputies of the Soviet Union, where he was a member of the Interregional Deputies’ Group campaigning for further democratic reforms.