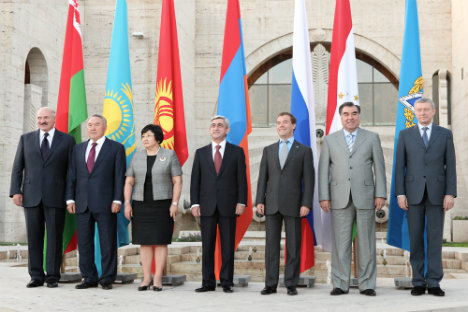 In Lieu of the Revolutions in Africa and the Middle East, Heads of CSTO Member States Have Agreed to Establish a Joint Rapid Reaction Force that Can Legally Intervene in Case of Internal Conflict

Whatever their revolutionary potentials, it would have been inconceivable a few years ago to expect social networks like Twitter or Facebook to galvanize dithering post-Soviet leaders into a concerted action. Yet, as heads of member-states of the Kremlin-led Collective Security Treaty Organization (CSTO) gathered in Astana on Friday, it was precisely the perceived threat from such social networks that brought a sense of unity to the diversity at the summit.

Russia had long sought – sometimes using sticks and carrots – to bring former Soviet Union satellite states into its fold, but the efforts had largely failed as diverging national interests prevented many from moving too close to Moscow. But with Arab Spring protests spreading like wildfire in the summertime, some long-serving post-Soviet leaders are having second thoughts.

Discussions at Friday’s informal summit in the capital of Kazakhstan have focused squarely on the ongoing upheavals in the Middle East, and on how to prevent the Arab Spring protests from spilling over into the territories of the former Soviet states, the Kommersant business daily reported. But the leaders of the CSTO, a military-political alliance of seven countries including Armenia, Belarus, Kazakhstan, Kyrgyzstan, Russia, Tajikistan and Uzbekistan, needed little persuasion to appreciate “the destructive role” that social networks had played in such protests. After a three-hour meeting behind closed doors, the leaders decided to create a unified preventive strategy for cyberspace, which could mean restricting the use of social networks such as Twitter and Facebook, widely seen as the bane of authoritarian Arab regimes, the newspaper said.

In a keynote speech, Kazakh President Nursultan Nazarbayev reminded his guests of the need to put up an impregnable wall against the spread of color revolutions on the territories of the former Soviet Union. Echoing similar calls made at the tenth summit of the Shanghai Cooperation Organization in June, Nazarbayev also called for a curtailment of freedom in cyberspace. Unregulated information space, he said, poses “threats to regional security and stability in the CSTO member states, especially in light of the latest developments in the world.” The national security threat in cyberspace happens to be familiar territory for the Kazakh president. Conscious of the role that the Internet played in mobilizing protesters in Iran and Moldova in 2009, president Nazarbayev signed the “Law on the Internet,” which classifies all Web sites, blogs and forums in Kazakhstan as mass media and imposes strict regulations on them, including restrictions in reporting on elections, mass protests and strikes.

But as the Middle East continues to be wracked by a wave of protests that toppled long-serving leaders in Tunisia and Egypt, experts say some of the leaders gathered in Astana still have much to worry about. President Nazarbayev has been leading his nation for the past 20 years, while both Tajik President Emomali Rahmon and President Alexander Lukashenko have each ruled their countries for 17 years, sometimes with doubtful democratic credentials. President Lukashenko, the current chairman of the Moscow-led alliance, told journalists on Friday that the leaders have been discussing how the CSTO could help them avoid the fate of their colleagues from Tunisia, Egypt and Libya. "We agreed to work together to develop measures to counter possible threats, especially in cyberspace," Lukashenko said.

Since the collapse of the Soviet Union, diverging political and economic interests have thwarted Moscow's endeavors to transform the largely symbolic political organization into a credible security organization. However, the tumultuous events in the Arab world appeared to have changed all that. "In the past, some countries perceived membership in the organization almost as a burden, but the events in Africa have had a sobering effect, alerting them to the need for a concerted effort to resist such destructive tendencies," a source told Kommersant on Friday. Lukashenko conceded as much, saying “recent events in the world, including the Arab arc and North Africa, beg for new areas of work.”

The leaders also took an unprecedented step on Friday to turn the CSTO, a largely symbolic political organization, into a more cohesive militarized security alliance with powers to intervene in internal conflicts in member-states. President Lukashenko, who in the past vehemently opposed the creation of the organization's Collective Rapid Reaction Force (RRF), said member-states are now determined to complete the process of recruiting and equipping CSTO’s rapid reaction forces "in view of the difficult situation in the world."  The RRF, he said, would deal with issues like border conflicts, but could also be used to repulse military aggression and combat international terrorism, organized crime, drug trafficking and other emergencies. Russian President Dmitry Medvedev said the CSTO rapid reaction force, which now numbers about 20,000 troops, “has become a regional force that can neutralize potential threats.”

Analysts said, however, that the measure could run into bumps, as it entails making amendments to the CSTO charter so that the alliance's forces can intervene on the territories of member-states. “It is a double-edged sword and many countries in Central Asia and Belarus are unlikely to want to give Russia an opportunity to interfere in their internal affairs,” said Fyodor Lukyanov, the editor in chief of Russia in Global Affairs. "Allowing the RRF to intervene in internal conflicts could also transform it into the likes of Saudi-led Gulf Cooperation Council, which is now largely engaged in quenching revolutionary fires across the Arab world.”