The echo of a golden age of Russian media 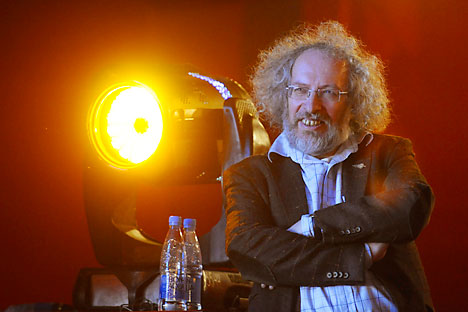 This August marks the 20th anniversary of the attempted coup aimed at preserving the Soviet Union. With the failure of that attempt came a new country, and a new media system. Brian McNair described the early period of privatization between 1990 and 1992 as a “honeymoon” in relations between the authorities and the media. During this time, Ekho Moskvy radio station became one of the pillars of free expression. Alexei Venediktov, the radio station’s chief editor, spoke with Yelena Vanina of “Afisha” about how his channel has managed to preserve the spirit of the “golden age” of Russian journalism for 20 years.

In June 1990, Gorbachev signed the law “On the Press,” allowing independent non-state-owned radio stations. My friends who had worked at government radio stations were fed up with all the propaganda and decided to set up an alternative. They passed through the registration procedure and were awarded registration number one. On Aug. 22, my friends called. I worked as a teacher at the time, so I was on vacation. They said: “Are you in Moscow? Can you spare us a week until Sept. 1? ” I replied: “I don’t listen to the radio, I haven’t the faintest idea about what it is and I don’t even know how it works without wires. But I’ll come, why not?” I came and they asked me: “Listen, do you have any connections at the Education Department?” I said, “Yes. The department chief has handed me all sorts of awards.” “Call him and interview him on Aug. 29.” I did, and that was my first interview for Ekho.

The radio station sprang up as an alternative to official information. It was 1990 and there were processes in full swing in the Soviet Union that were not covered by the government media. A month after the radio station was set up, the issue of shutting down the station was raised at the Presidential Council. The reason was that we were the only radio station that had reported troops converging on Moscow in September. As a result, the authorities had to make lame excuses that the troops were “just on their way to bring in the harvest.” Gorbachev was fuming: “What is that pirate radio station up to? It is saying things that it shouldn’t.” At the time, our office was on Nikolskaya, 200 meters from the Kremlin walls. That was the first time the Moscow authorities came after us. So, little by little, we became known around the country.

In August 1991, I was first sent to the Moscow Soviet (City Hall), the resistance headquarters, and then to the White House. Because I was politically literate and well read, I had no problem deciding whom to interview. For instance, [Yury] Luzhkov, a well-known personality, was passing by; I buttonhole him, and I have a microphone – a huge affair, it weighed all of four kilos at the time.

You see, for a history teacher, working with information is child’s play. When people come to me for interviews, I pigeonhole them like I used to with my pupils. They belong to one of several types. I look at Putin and I can recall at least two pupils like him in every grade. During the coup attempt, I spent two days and nights at the White House. There were no mobile phones at the time. On the third day, returning home from the White House after a crazy night, I saw a colleague in the anteroom, talking on the phone. “Do you want to go on the air?” he asked me and gave me the telephone. As it turned out, our communications had been cut off, but our engineers, with typical Russian ingenuity, fiddled with some wires and connected us to the telephone. So we used the telephone to get on the air.

In 1994, it became clear that it was time to stop working like amateurs and to really get our act together. A lot was expected of us but our equipment was obsolete, pay was miserable and we could not afford to hire people. We started casting about for investors. Eventually, we zeroed in on two groups. They were the Weiners, Chicago bankers, and the Gusinsky group, which had just acquired NTV. The Weiners offered more money but they demanded control over editorial policy. [Vladimir] Gusinsky offered less money but said, “Let the journalists choose their own Editor-in-Chief.” We decided to write it down in our charter that the journalists elect the Editor-in-Chief and the board of shareholders attaches the final seal. In other words, the shareholders cannot appoint the Editor-in-Chief over the heads of the journalists, as happened with NTV. So we sold the controlling stake to Gusinsky and he lived up to his promises.

Later, Ekho Moskvy was taken over, along with NTV, by Gazprom-Media. I knew everything down to the last detail because I took part in the negotiations and I met with [Alexander] Voloshin and with Putin. I realized that the authorities had decided to take control of the editorial policies of all TV and radio channels. It was a logical process of hidden nationalization. The tax police, arbitration courts and other agencies acted in the same way. It was a well-coordinated action that was anything but spontaneous. I was well aware that a political decision had been made. But what could I do? They take hostages and jail one investor, then another. Is there anything you can do about it? Nothing. So I told my people: Let us go on doing our job as if nothing has happened; when they come to shut us down, we will know. That is my problem, and your task is to work. I told the people on high: “We won’t meddle in politics but if there are deviations, we will criticize them.” Putin listened to me and you know the result. We are allowed to criticize.

As it turned out, in reality it was Vladimir Putin and not Gazprom who became my main shareholder. I was told: “Your shareholder sits in the Kremlin. You are turning a profit and we don’t want to interfere with your organisational problems.” I had a conversation with Vladimir Putin in August 2000 and he told me that the editor-in-chief was responsible for everything that was happening at the radio station. But they, too, understand that if things are to turn out well, Ekho should have a good reputation. Hillary Clinton or Barack Obama would never come to a radio station owned by Gazprom. But they would and have actually come to a radio station because it is independent of the shareholders and the government. I put this message across to [Yury] Senkevich and Putin. They realized that Ekho Moskvy was a business in the broad sense of the word.

This is an abridged version of a longer interview that originally appeared in Afisha.

journalism fall of the ussr Society Fall of the USSR