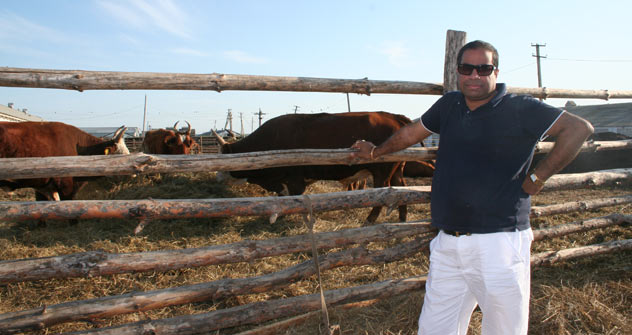 Matharu Harjinder Singh at his farm.

About three years ago, Matharu Harjinder Singh, who was running a business supplying tea to Russia, turned to rearing rare breeds of beef cattle. Today this Russian-born Indian entrepreneur owns two money-spinning livestock farms in the Samara region, and is brimming with big business plans for the future.

As you go into the village of Novy Kutuluk, where the office of Matharu Harjinder Singh’s company RusBiznesInvest is located, there is a large Russian Orthodox cross. And at the centre of the village there is a banner with a portrait of Guru Baba Virsa Singh. Below the portrait, Singh has inscribed his mission statement: “Our programme is aimed at transforming all uncultivated land into a prosperous farm which will benefit all people, no matter what their nationality, race or religion”.

Singh’s tryst with agriculture has an interesting back story that mixes divine guidance, grit and hard work. He was destined to be a farmer in Russia, his guru had predicted long time ago, and the prediction has come more than true.

In November 2008, just after the first snow of the year, Singh went to the Samara Region, and bought two derelict farms along with 2700 hectares of weed-covered land and a herd of 500 cows, each one producing just two litres of milk.

He brought farmers from Punjab, the granary of India, and hired locals to work on the land and they turned the farm around completely. They cleaned out all the cattle pens, erected new wooden outbuildings, equipped it with modern technology, drilled wells, and put water troughs in each cowshed. In winter the farm employs 40-50 people. This number goes up to 100-110 in the summer.

Today the two farms owned by the RusBiznesInvest, Vostok and Neprik, have 20,000 hectares of land, 3000 Kalmyk cattle, 90 mares of the New-Altaisk breed for meat, as well as New-Altaisk breeding stallions.

But Singh’s pride and joy is his herd of 103 Australian cows – these cows have not existed in Russia for some time (each one costs around $7000). He had brought this herd over from the Green Continent in December last year. A one-way ticket (on a ship that leaves once a month for Novorossiysk, and then by road on eighteen-wheelers) came to around 100,000 roubles ($3500) for each cow. But Singh is confident his investment will more than pay off. “We are going to meet the “golden” calves.  These hornless cattle roam free around the green pastures of the Volga; unlike last year’s drought, this summer has been good for the meadow grass.”

“Mandolong cattle are ideally suited for the hostile Russian climate, where the temperature ranges from -30ºC in winter to +40ºC in summer. Over two months our young animals put on 150 kilograms in weight. And today the steers are already putting on as much as 2.5 kilograms in 24 hours,” says Singh, his voice dripping with pride. What makes these cattle special is the wonderful flavour of the meat, which also happens to be marbled. “So in the next few months we are planning to bring over another 500 of these cows, as well as 30 breeding bulls,” says Singh.

Clearly, Singh has big plans for the future, but is not someone here just to make a quick buck. “That’s all in the future, but then we’ve definitely made good living quarters for the Indian workers out of the old bakery,” says the farmer entrepreneur.  He has made it a point to provide well for farm workers. They stay in a hostel, and are given a packed lunch. So far the only Russian food the Indian workers eat is semolina porridge (they have something similar back in India), and they are gradually starting to try other Russians specialities.

The Indian farm labourers have managed to avoid the issue with beef, forbidden by their religion: not one of the Indian workers has even tasted an ounce of the stuff. In the canteen they are served a special menu of chicken and vegetables.

Brought up in Russia, Singh is, however, in a different league, and says confidently that he will eat beef. “I’m actually very Russian in my outlook, as I was born and raised in Moscow. My father worked there as a presenter of Indian programmes on Russian radio. I went to a Russian school, though admittedly one with a focus on English. And then, much to my parents’ annoyance, when they were away in India (he smiles slyly) I married a Russian girl. But I have to say that now I am always with my parents, I divide my time between Samara and Moscow, where they live”.

“By the way”, says the businessman “there was one other turn of fate in my life. When I was a student at the Peoples’ Friendship University of Russia, I had to write an essay on the artificial insemination of cattle. I then used to go to the EANE to study the problem and I would puzzle over who I was -  Was I going to be an economist or a vet? But it turned out completely differently…”

Now, animal breeding has become his core business, and in the next few months the farm is going to become an approved breeding centre for Australian and Kalmyk breeds, which will mean Singh’s farm will be permitted to send its purebred animals and spermatic material to regions other than Samara.

“Our meat is completely free of chemicals. We don’t get our cattle up to a good weight using hormones, God forbid, it is all because they have a good diet. We are hoping to produce marbled meat, which is still as rare as hens’ teeth in Samara, and we intend to start supplying it to restaurants and supermarkets as early as next year”, says Raju. “We are actually planning to increase the Kalmyk herd to 4000, and the Australian cattle herd to 6000. Our Mandolong herd is the only one in the whole of Russia”.

Besides raising cattle, Singh continues to breed horses. He has about 100 New-Altaisk horses and plans to buy six four-year-old stallions in the Altai region.

All this success has whetted Singh’s appetite for business. He is brimming with big ideas.  They include buying a meat-processing factory and opening the first tea-packing factory in the region, which could happen as early as autumn. The big project which is set to come to fruition this year will be setting up of a chain of family-run farms, each with 300 cattle. The company will oversee the building and day-to-day running of the farms, and deal with the maintenance side of things.

Singh makes no bones about his ambitions; “We want to become the biggest livestock company in Russia. Today there is a similar farm in Krasnodar which has about 10,000 cattle. We would like to develop quickly and successfully. We have huge plans, but we are not going to hurry. As they say, everything in its own time.”

Singh is all praise for the Russian government’s agriculture-friendly policies. “Today the government in Russia is really helping to develop agriculture. It’s plain to see – this project is running on 40% borrowed money. But at the moment it is a good time for farmers to get a loan, the interest rate of the Russian Agricultural Bank is 13%, and if you deduct all the subsidies that we get from the government, it works out at 6%, and the annual credit is just 4%. We also leased all the equipment, everything is made in Russia”.

There is, however, skilled manpower crunch. Singh says although his company pays a reasonably attractive wage of 15,000 roubles ($535) per month, hiring locals is not easy. “So we invite specialists from India from Punjab state. They are good, honest, hard-working guys, they understand that farm work doesn’t adhere to a regular timeframe; if necessary they have to maintain the equipment at night and be in the fields in the morning.”

“In the year they have been in Russia they have done a good job of learning Russian and have got used to the cold weather. When it’s -25 outside, they are walking around in trainers. For young Indians it is a chance to gain work experience in another country, and work towards their future,” he says.

But all this success hasn’t got to his head. His friends often say to him. “Raju, why don’t you hire managers, you’re the president”. And sitting behind the wheel of his car, he will answer “Even if I am president, I’ll go where I have to go.” And on the way he manages to chat up everyone he meets and find out how they are getting on.