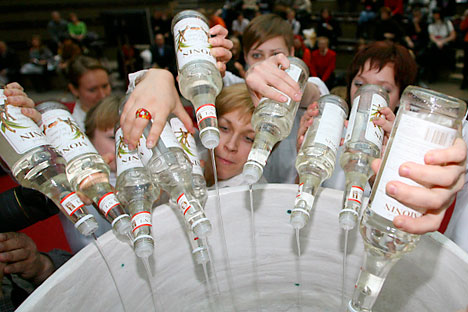 Russia's chief narcologist has announced that people in Russian cities consumed only 15 liters of alcohol per capita last year, compared with 18 liters the year before. WHO experts say the real number is 12 liters, but at least they agree the amount is going down.

According to Evgeny Brune, chief narcologist of the Ministry for Health and Social Development, the average annual per capita alcohol consumption in Russia has dropped from 18 to 15 liters.

Brune made his announcement at a press conference on Aug. 17, and added one caveat – alcohol consumption is declining only in urban areas. “In the countryside, unfortunately, the situation is not improving,” he said.

Daria Khalturina, co-chairperson of the Russian Alcohol Control Coalition at the World Health Organization, said that alcohol consumption in Russia has actually been going down for several years.

“Actually, the reduction began in 2005,” Khalturina said. “Such a drop could not, of course, have happened within one year. It is to be attributed, on the one hand to the reform of the alcohol market and on the other hand, to the reduction in the consumption of legal alcohol.”

Khalturina said that independent experts base their assessment on both the legal and illegal alcohol markets. First they measure the registered production and sale of alcohol. “Thereafter, the level of illegal alcohol consumption is assessed proceeding from the figures that we knew in the Soviet period and the estimates of a wide circle of scholars,” she explained. “Then follows analysis of the dynamics of ‘alcohol-related indicators’ and consumption of the types of illegal alcohol contained in medicines, for example, is taken into account.” She noted that, because the calculations are based on expert evaluations, the result is also very approximate.

“According to the WHO, per capita alcohol consumption in Russia is 12 liters,” she said.

The organization could not explain the discrepancy between official Health Ministry figures and the WHO data.

The 18 liters per capita figure cited by the Health Ministry has been challenged by experts at the Moscow Research Institute of Psychiatry. The head of the institute’s systemic research informatics department, Dr. Alexander Nemtsov, said that the Ministry’s calculation methods had been secret until recently, but that he had now obtained them and, in his opinion, they were not accurate. “Alcohol consumption in Russia today is no higher than 11-12 liters. Perhaps the figures were overstated in order to report cheerfully a decline in alcohol consumption by 15 percent in 2011,” Nemtsov said.

Russian President Dmitry Medvedev launched a campaign against alcohol in August 2009, and over the past two years, various legislative initiatives have been introduced. For example, orice restrictions came into on Jan. 1, 2010: now, a half-liter bottle of vodka cannot be legally sold for less than 89 rubles. And as of Sept. 1, 2010, sale of liquor with an alcohol content higher than 30 proof was banned in Moscow from 10 p.m. until 10 a.m., and at the end of July, a law banning the sale of all alcohol (including wine but excluding beer) from 11 p.m. until 8 a.m. came into effect. So far, it is still possible to buy beer at night, but only until 2013.

For his part, Ivan, a member of the Moscow and Moscow Region Alcoholics Anonymous community, said that there are about 5,500 members of recovering alcoholics in solid remission in and around Moscow.

“Solid remission means abstaining from alcohol for more than 3-5 years,” he explained. According to his calculations, there are 375 Alcoholics Anonymous groups in 129 Russian cities.
﻿