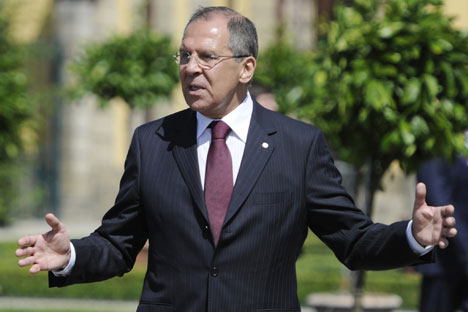 Will Russia’s initiative to scrap the economic sanctions against Iran break the current stalemate over the Iranian nuclear program?

Although a Russian-proposed plan to lift international sanctions against Iran and ease international tensions in the Middle East was discussed with optimism by Iranian and Russian authorities last week, attempts to resolve the nuclear standoff seem to have been going around in circles. While representatives of the Russian Foreign Ministry and some experts view the plan as a positive signal from Moscow, other pundits question its possible effectiveness and claim that the Iranian nuclear program may remain a thorny issue for the international community and U.S.-Russia relations.

The initiative to lift economic sanctions against Iran was proposed by Russian Foreign Minister Sergei Lavrov this July, and has since been dubbed the “Lavrov's plan” in the mass media. It calls for the international community to cancel restrictions against Iran in a step-by-step exchange for concessions from Tehran: if Iran provides data on its nuclear program to the International Atomic Energy Agency and meets all of the organization’s requirements, then specific sanctions will be cancelled reciprocally.

Mutuality and a step-by-step policy are what Russia is seeking by proposing this plan, said Sergei Ryabkov, Russia’s Deputy Foreign Minister, in an interview to the Kommersant Daily newspaper. He described Lavrov’s initiative as a good roadmap to achieve a breakthrough and strengthen political ties with the West and the United States in particular.

Unlike Ryabkov, some Russian and American experts are raising their eyebrows at the Lavrov plan because Washington is glued to its traditionally strict policies toward Iran, and seems to be reluctant to change its political course. “I do not see anything really new in Lavrov’s plan,” said Gordon Hahn, an expert on Russia at the Monterey Institute for International Studies in California. “I think it will be met with indifference [in Washington], given that it does little to resolve anything.”

Lavrov’s plan is hardly likely to be implemented successfully, said Evgeny Minchenko, the director of the Moscow-based International Institute for Political Expertise. “Although America understands Russia’s position, they do not want to come up with a compromise,” he said. “They may keep following their traditional policy because they still want Russia to go along with America.”

Nevertheless, Lavrov’s plan has its supporters. Fyodor Lukyanov, the editor in chief of the Russia in Global Affairs magazine, sees the initiative as a positive sign despite the fact that it doesn’t contain specific details and it’s difficult to predict whether it will actually be implemented. “Russia is correct in making an attempt to move the problem out of the current stalemate, because sooner or later the United States and Israel will have to answer the question of ‘what is to be done?’ if Iran gains the status of a nuclear power,” he said. “The method of economic sanctions has been proven ineffective, so the United States should be interested in the plan.”

Gregory Feifer, an expert on U.S.-Russian relations and a senior correspondent at Radio Liberty, is also optimistic about Lavrov’s initiative. “I can say that if Russia does nudge Iran toward cooperating with the international community, that would only be a good thing, and rather than complicate relations with the United States, it would help improve them,” he said. Worsening relations between Iran and Russia due to the economic restrictions were the reason behind Moscow’s attempts to end the sanctions on Iran, he said. Minchenko echoed this view, saying that mutual economic interest and the need to maintain military trade with Tehran is essential for Moscow.

When the U.N.-imposed sanctions entered into force in 2010, Russia ceased shipments of strategic weapons and missiles agreed on in a 2007 contract, costing Russia around $800 billion. Lavrov further said this February that the spillover effects of the embargo among the Iranian population had driven Russia to oppose the sanctions, reported RIA Novosti. “Further sanctions will mean the stifling of the Iranian economy and the creation of social problems for the average people,” he said. “To tell the truth, we will not be able to support them [the sanctions] anymore.”

The Iranian nuclear program and Lavrov’s plan may be an important international issue in connection with the ongoing U.S. presidential campaign as well. Although Americans are concerned about domestic problems such as unemployment, healthcare reform and the economic downturn, U.S. presidential candidates may spout tough rhetoric against Iran to bolster their foreign policy credentials during the election season. Feifer said that he doesn’t rule out the possibility that Barack Obama will “try to tout spearheading new sanctions as one of his foreign policy successes.”

Likewise, Hahn said that American presidential candidates will focus on the Iranian nuclear problem to prove their international proficiency despite the fact that “the American voter is interested in one question: the economy and jobs.” Iran’s nuclear program and apparent efforts to acquire nuclear weapons should be a major concern for any U.S. administration, but Obama’s administration “appears to be less concerned than any Republican or centrist Democratic administration would be,” he said.

Hahn argued that "there does not seem to be a resolution to the Iranian problem that does not lead to the use of force at this point.” Nonetheless, due to the U.S. economic situation, the war against Libya, Afghanistan, and Iraq, “any use of force against Iran is out of the question” unless Iranian actions pose an immediate threat to Israel or to U.S. national security, he said.