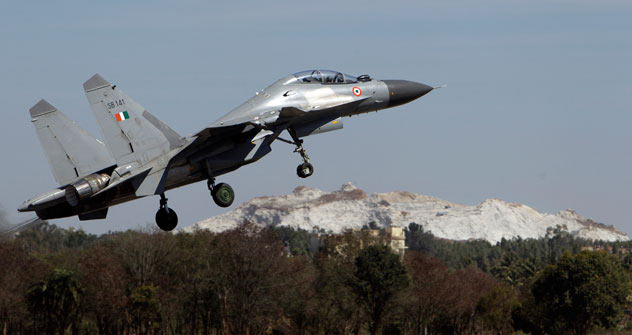 Russia’s Irkut company, producing the Su-30MKI fighters for India’s Air Force, said the aircraft were soon to be upgraded to fifth-generation Super Sukhoi fighters. The statement was made by Irkut chief Alexei Fyodorov at Moscow’s MAKS air show.

The upgraded fighters will have a new cockpit, an improved radar and stealth technology,making them more difficult for the enemy’s radars to detect. Currently, India’s Air Force has about 100 such fighters, arranged in five squadrons. Eventually, India will have over 230 aircraft of this type (13 squadrons).

India’s aircraft manufacturer Hindustan Aeronautics Limited (HAL) is producing the Su-30MKI under licence, at its plant in Bangalore. “Not only will the fighters currently deployed by India’s Air Force be modernised but also those to be produced under licence or directly supplied from Russia”, Fyodorov added. Most important, the plane will become a platform for deployment of heavy weapons, including BraMos supersonic cruise missiles”, he stressed.

Fyodorov also said that the Su-30MKI was to become a powerful aircraft with functions similar to those of fifth generation fighters. Even so, he refused to elaborate on the programme,saying that these issues would be resolved during Russian-Indian negotiations. “Currently, we are discussing the possibility of upgrading separate types of aircraft”, he said. The cost of the modernisation remains uncertain but, judging from the overall tendency for such modernisations, the price tag could be around 1 billion US dollars.

Meanwhile, HAL is optimistic about its participation in the development of technology for the Fifth Generation Fighter Aircraft (FGFA). The prototype of this aircraft, the T-50 PAK FA, was exhibited at the MAKS 2011 air show. India will be one of three countries in the world, alongside the United States and Russia, to have fifth-generation fighters.

HAL chairman Ashok Nayak, who visited MAKS 2011, confirmed that his company’s participation in the design of the FGFA was “the right thing to do”. In December 2010, Russia and India signed an agreement on preliminary designing of the aircraft, putting the project’s value at 295 million US dollars. The initial design will take approximately 18 months. The Indian model’s main difference will be a 2-man crew. “HAL hopes to complete the initial design and move further,” Nayak said, adding that the specific use of Indian components in the FGFA would be determined at the full-scale design stage. HAL is working on the aircraft together with Russia’s United Aircraft Corporation. India’s Air Force will be the first foreign customers to buy the new aircraft.

India has announced plans to buy 250-300 fighters of this type, with the first deliveries expected to begin service in 2016-2017. The cost of the programme is likely to exceed $35 billion. Russia will buy approximately the same number of the aircraft.