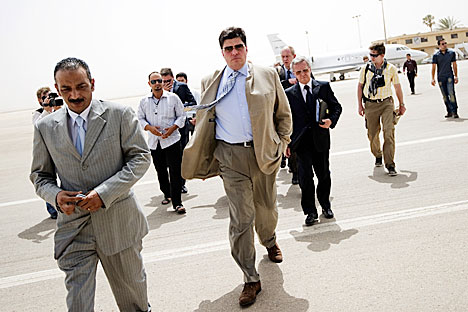 Russian envoy to Africa, Mikhail Margelov (C), arrives at Benghazi airport on June 7, 2011 for meetings with Libyan rebel leaders in the first trip by a top Russian official to their stronghold. Source: AFP/East News

In its response to the "Arab Spring," Moscow is sending messages as clear as any other global player.

The mass protests that have been rocking the Middle East and North Africa region since the beginning of the year came as a surprise to many of the world’s governments. As a result, their responses to the Arab Spring have been largely reactive and often inconsistent; it’s hard to name a country that has succeeded in designing a unified approach to the events taking place in countries as diverse as Tunisia, Egypt, Yemen, Bahrain, Libya, and Syria. This however didn’t prevent some pundits from criticizing Russia’s Middle East policy as being particularly chaotic. Some called “Russian policy toward Libya…a study in ambivalence;” another pundit labeled Russia’s approach vis-à-vis Libya “a zigzag policy.”

Western analysts tend to ascribe every “inconsistency” in Russian foreign policy, whether real or imaginable, to disagreements between President Dmitry Medvedev and Prime Minister Vladimir Putin; volumes have been written about a public spat between the two following Russia’s vote on U.N. Security Council Resolution 1973. Certainly, like in any country with competing business and political interests, there is a difference in opinion among Russian elites with regards to the country’s Middle East policy. Yet, a careful examination of Russia’s recent behavior in the region reveals the presence of a rather consistent strategic line, an approach that is based on three general principles.

First, Moscow shows little appetite for bold solo moves in the U.N. Security Council, including using its veto power, which has been applied only four times in the past 15 years (last in 2009). These days, Russia prefers following the crowd of its fellow Security Council members. Russia supported U.N. Security Council Resolution 1970 calling for imposing an arms embargo on Tripoli; this resolution was unanimously adopted by the Security Council. Although initially Russia opposed to follow-up Resolution 1973 because of its too “open” language, it eventually decided not to veto it and abstained instead. In so doing, Russia didn’t act alone: it joined a respected group of major international players, such as Brazil, China, Germany, and India.

Of course, Russia’s unwillingness to be isolated in the council wasn’t its only reason for not vetoing Resolution 1973. Russia also recognized the risk of being blamed for the death of civilians should Gaddafi’s troops attack Benghazi in the absence of a no-fly zone – and such an attack looked almost inevitable on the eve of the resolution vote. In addition, by vetoing the resolution, Russia might also have alienated one of the resolution’s sponsors, France – Russia’s friend and major trading partner. Russia simply didn’t have so much at stake in Libya, arms sales to the Gaddafi regime notwithstanding, to spoil its relations with France and other NATO countries in the middle of difficult negotiations over European missile defense.

Second, Moscow considers its current diplomatic activities in Libya as part of a greater effort to increase its influence in the Middle East. It therefore carefully watches the delicate balance of interests in the region. Russia’s sensitivity to regional sentiments helps explain another “inconsistency” of its Middle-East policy: Its decision to abandon Gaddafi while continuing to provide diplomatic cover to the Assad regime in Syria.  Russia took note of the fact that Resolution 1973 was supported by the Arab League, an organization that repeatedly condemned the Gaddafi regime for brutality. Since Gaddafi had no friends in the Arab world, why did Russia have to protect him?

Syria was a different matter; there was no regional consensus with regards to the amount of pressure to be applied on Damascus. For as long as the Assad regime enjoyed some support, however tacit, from two regional powerbrokers, Saudi Arabia and Turkey – incidentally, countries with which Russia has been cultivating good relations – Moscow saw no reason to do “heavy lifting” on its own in the Security Council. Yet it made it very clear that Russia’s diplomatic support for Syria isn’t unconditional: in August, Medvedev warned Assad that Russia’s approach to Syria may change if the Syrian strongman fails to implement promised reforms.  Characteristically, Medvedev’s statement almost coincided with the Arab League’s condemnation of Syria’s violent crackdown on protesters and Saudi Arabia recalling its ambassador to Damascus.

Third, Moscow seems to have abandoned its old habit of sticking forever to “friendly” dictators; it now prefers to engage all the parties involved in a conflict. Following this new-found flexibility, Russia kept communicating with Tripoli; at the same time, Medvedev sent his special representative, Mikhail Margelov, to meet with the opposition stationed in Benghazi. After Margelov’s trip, the rebels put out the Russian flag and proclaimed Russia an “ally.”

The same approach is being applied in Syria. In June, Margelov hosted a meeting with the Syrian opposition and called for an end to "any and all forms of violence." Margelov then made it very clear ("Leaders come and go, politicians come and go, social systems come and go, but for Russia there remains a single reliable and trusted friend: the Syrian people”) that Moscow is willing to deal with any eventual in the Syrian conflict.  Needless to say, this message was well received by Margelov’s interlocutors.

Russia’s hard core realism in the Middle East isn’t anything new: it’s a continuation of the pragmatic foreign policy Moscow has been conducting for the past 12 years. Yet, some new, surprising elements seem to emerge. When justifying Russia’s position on Libya, Medvedev accused the Gaddafi regime of “crimes committed against its own people” and directly linked its “abhorrent behavior” to Russia’s refusal to veto Resolution 1973.  In other words, by taking into account the domestic conduct of the Libyan leadership, Medvedev essentially rejected the simplicity of “realpolitik” and introduced elements of the value-based approach that until now has been completely foreign to the Kremlin.

Medvedev’s words were echoed by Konstantin Kosachev, Chairman of the State Duma Committee on Foreign Affairs. In a recent article discussing the situation in Libya, Kosachev argued that foreign interventions into domestic conflicts could be justified “when people’s lives are at stake.” This argument essentially rejects Russia’s long-standing position that sovereign rights of the nation trump all other considerations. Obviously, it remains to be seen whether these statements are no more than tactical one-offs or they signal a paradigm shift in the Russian foreign policy.