In Russia, working life ends at 40 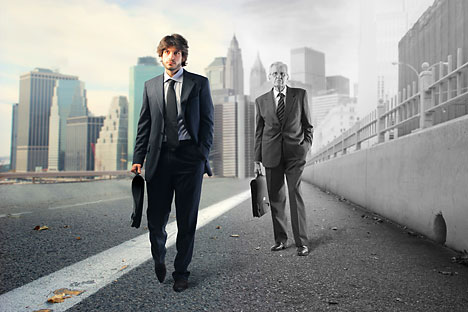 Although people around the world suffer from age discrimination, the problem is especially acute in Russia where corporate culture does not value innovation or experience.

“I have three separate degrees – in teaching, law and management. Starting in 2002, I was head of an HR department, and I was constantly building on my qualifications,” said Ludmila F. “Now I am looking for a new job and I have sent my CV off to 34 recruiters. But I didn’t specify my age on my CV. I got replies from 19 potential employers. But when they found out that I was 55, 14 of them openly admitted that they had age limits.”

According to Michael Germershausen, Managing Director of the Antal Russia recruitment company, vacancies for qualified specialists and middle and upper management staff are few and far between for job seekers in the 45 to 50 age range. “Employers still prefer young specialists for most roles,” said Germershausen. “The main reasons for this are the problems of the older generation – their inadequate grasp of modern economics, their weak knowledge of foreign languages, and the fact that it is hard for them to adapt to modern corporate culture and management style. For example, the unofficial age limit for mid-level professionals in the finance sector is 35-38 years. People think that if the candidate is already in his or her 40s and is not yet a director then there is something not right – they are either not professional enough or they lack ambition.”

Olga Rybakova, a project manager at the Consort Group HR consultancy, suggests that the main reason specialists older than 45 have problems finding work is not their shortcomings as professionals, but the fact that young managers are immature in their outlook and wary of employing people older than themselves: “They do not know how to build a relationship with them, and they confuse professional activity with unresolved personal conflicts they have with their parents, so they find it simpler and easier to deal with people younger than themselves,” Rybakova said.

But older job seekers should not give up completely. There are positions out there in which age is a distinct advantage.  “The older generation often have a lot of experience in a specific area,” said Alexei Zaikin, deputy CEO of business development at the Solid Investment & Financial Company. “For example a 50-year-old candidate applying for the role of asset manager might come with a whole client base.”

“The management of foreign companies – especially in German and Japanese companies – often prefer mature candidates,” said Michael Germershausen. “One of the international companies stipulated that candidates for the role of senior legal consultant had to be above the age of 36, even though similar positions are being filled by people as young as 29 in other companies. The same thing is often happening with positions such as sales director in foreign corporations.”

But according to Olga Savosko, HR Director of BCS Financial Group, not everyone can develop a career in mid-life. “After the age of 50, finding work is possible if you have had a successful career, if you have made a name for yourself in a particular market, or when you have substantial professional achievements under your belt and you have occupied top positions in well-known companies,” Savosko said. “Alternatively, you could be a specialist in a niche area, or perhaps you would have good business connections which the company needs. But your chances of finding work on the open market are otherwise pretty slim. At this age people tend to find work through recommendations.”

In general, there are two main paths that lead to financial and career success: the path of the manager and the path of the skilled professional. But in Russia, the career ladder is not well developed in many sectors. For most companies, business is organized in such a way that highly skilled professionals just aren’t needed – in the absence of real competition in a corrupt economy, a manager only needs people who are happy to do their allocated jobs and nothing more. As a result, the qualifications ceiling for non-management roles is reached between 30-35.

If an employer has not become a manager by 35, then it is unlikely he or she will continue to grow professionally. According to data collected at Superjob.ru, the average salary of various age groups grows steadily with age and peaks around the 40 year mark. After this, income seems to plateau, and in some cases it even goes down.

Even though in the West it is also harder for a 50-year-old to find a job than it is for a 30 year old, companies in all sectors need staff with different levels of experience. As long as Russian companies frown on innovation and reward people who do what is expected but nothing more, middle age job seekers will continue to hear: “We have a young team – you wouldn’t be suitable.”