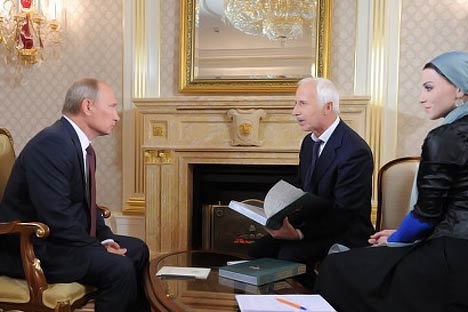 The prime minister gave an interview to mark the 60th anniversary of the birth of Akhmad Kadyrov, Chechnya’s first president and father of Ramzan, the current leader in Grozny.

Speaking with the Chechen media Vladimir Putin hit out at those who have made a case for allowing Chechnya and neighbouring Dagestan, Ingushetia and others to become independent. “Those who are saying this should have something cut off them,” he said. “They don’t know what they are talking about.”

Although the “they” in question were not identified, Putin’s remarks appear to be directed at politicians and commentators critical of Russia’s determination to keep hold of the North Caucasus at all costs.

“The moment a country starts to turn its back on problematic territories is the beginning of the end of the country as a whole,” Putin added in remarks later published on his official website.

It isn’t the first time Putin has used aggressive rhetoric in support of Russia’s uncompromising crackdown on separatism in the North Caucasus.

In Feb. 2009 he notoriously invited a French journalist to convert to Islam and come to Moscow for his circumcision after facing critical questions about the war in Chechnya. “I would advise whoever does the surgery to ensure that you’ll have nothing to grow back afterwards,” Putin said at the time.

Putin said he is convinced that Russia’s North Caucasus republics cannot exist as independent states, complaining they would become puppets of influential neighbors.

“Almost immediately they would be spiritually and economically occupied by some of the forces seeking influence in our near neighbors,” he added. “After that they will be used as a further tool to rock Russia itself. “And what will that mean? Nothing good, only trouble and tragedy.”

After more than a decade of counter-insurgency measures, Putin now wants to see a counter-corruption campaign.

While he acknowledged that the culture of illegality was a problem across Russia, the premier warned that the consequences were particularly acute in Chechnya.

“Why is it especially important for the North Caucasus and Chechnya?” he asked. “Because it is this which creates a breeding ground for the same radicals who draw simplistic conclusions and tell the people: ‘if we were in power, we would do better.’