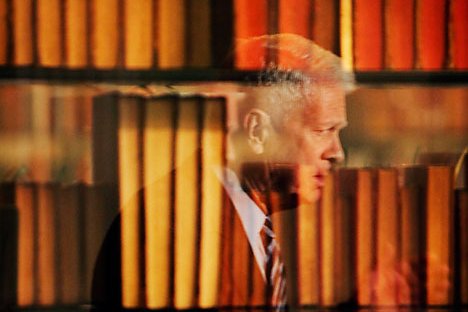 Dr. James Billington was already Librarian of Congress in 1991, and he was in Moscow in late August to attend the Congress of the Compratriots, a project to encourage the return of Russians who had immigrated. Nora FitzGerald of Russia Beyond the Headlines interviewed Billington on the anniversary of the failed coup.

Russia Beyond the Headlines: What are your recollections of the putsch 20 years ago today?

James Billington: I was informed very early in the day about the coup. You could hear the tanks rolling in all over the place.  This occurred on the Feast of the Transfiguration on the calendar of the Orthodox Church. I went to the Cathedral of the Assumption with many of the Russians at the congress who were staying at the Rossiya hotel.

I remember the doors to the church were opened at the end of the service onto the main square of the Kremlin. I had seen this only in the coronation scene of the opera, “Boris Gudonov.”

As events unfurled many went directly to the Russian White House. I went somewhat later in the day. I was still seeing various people within the system, including a leading figure in the Academy of Sciences. He had already taken down Gorbachev’s picture and he said was glad he was taken away.

Moving around Moscow that morning, there was surprisingly little buzz or hysteria. There were the tanks, as a force of intimidation. Then once you got to the White House there was the beginning of a gathering and a somewhat carnivalesque atmosphere.  There was a certain ebullience, but it didn’t make a clear impression until people started coming to the White House and making speeches.

RBTH: How did the atmosphere change as the coup began to fail?

J.B.: By the second day, word was getting around very fast. Opposition started galvanizing, though most people were still spectators.  You had a more electric atmosphere as Elena Bonner and Eduard Shevardnadze arrived. A great moment was when Slava Rostropovich arrived with his cello.

The whole standoff gave expression to long-suppressed amorphous desires. Russians were fishing both to recover what had been lost in their own heritage and to discover the freedoms other nations were enjoying.  Two pictorial images everyone had in mind by the second day.  One was a picture reproduced of Yeltsin on the tank with his white hair and a good smile on his face. That image was iconic.

The only other was the televised picture was of the junta, lined up around its leader with shaded dark glasses and shaking hands.  It was the only one time they appeared in public. I remember watching this with Russians, who said, ‘They look like the defendants at Nuremburg.”  There was a sense of rightness conveyed in images, not in manifestos. There was a strong sense of whom to identify with.

The two biggest geopolitical events of the past twenty years were totally unanticipated—the explosion of radical Islam and the other was the implosion of the Soviet system--and we still don’t understand it.

The Russian Federation, which had elected its first president in Russian history, was in effect opting out of the Soviet Union. They weren’t formally doing so but they were defining this actually on the spot by not recognizing its authority. That still hasn’t been understood in retrospect.

One of the amazing facts of this crisis was that no one in the giant military and security establishment would give and order to shoot, and no one would shoot without such an order.

On the third day the coup began to unravel, and tanks moved out often covered with flowers. A kind of moral transformation had occurred, even within the system exorcising at last the genocide experienced under Stalin. On the streets, you kept hearing the Russian word for miracle, “chudo.”

RBTH: Who were the heroes on this occasion?

J.B.: History has missed this completely. We don’t know who in the establishment decided not to use force. There were all kinds of heroes besides young people simply seeking freedom:  elderly ladies, who went out and talked to the young soldiers on the tanks. As did younger priests, who gave them newly minted bibles—and older Siberians and Afghan veterans who provided the skeletal defense force for Yeltsin within the White House.

You have developed a rich relationship with Russia over the past twenty years. How has the country or Russian-American relations surprised or disappointed you?

Broadly speaking, two things have happened in Russia over the past 20 years. One is the survival of much of the centralized bureaucracy and systemic corruption of the late Soviet system. Classic authoritarian structures are very dependent on it. On the other hand, you have a lot of local vitality and new perspectives within a generation that has been brought up politically, culturally and socially in a post-Soviet atmosphere much more conscious of alternatives and entrepreneurship. We see this in our Open World program that has brought fourteen thousand emerging young Russian leaders to visit communities throughout America.

There is now a recovery of old Russian strengths and a return to religion, which has taken many forms--but at the same time has not been made an obligatory state religion. Russia has much more vitality in the provinces and a number of structural changes. Is the glass half full or half empty? It’s a classic question. There are countering trends. There have been important legal reforms including the spread of jury trials. But there have also been unsolved assassinations of investigative journalists and the intimidating first and second show trials of Mikhail Khodorkovsky.

RBTH: How important is cultural reset to the state of affairs with Russia and America today?

J.B.: Cultural reset is extremely important today and should be widened and democratized. Cultural exchange should not be just the occasional VIP visit.  Even in Soviet Russia there was some exchange of performances and performers, and that’s always been positive. What has not developed enough even now is human exchange.

The Open World program has had quite a remarkable effect by bringing people from all over Russia, not just a few showpieces in a few places. There is not nearly as much Russian and American exchange as there could be. There is much more with other countries. I don’t like the term “soft power” but exchanges are vital to help Russia develop, with a more participatory and entrepreneurial society

We also need more economic collaboration. There are not enough developmental projects.  There is so much we could do together. There is just not enough human contact. Culture has many aspects and it isn’t just a small number of elite exchanges. It ought to involve the regions and women. There are some signs that Russians are more interested in having more Americans over.

The Library of Congress “Meeting of Frontiers,” project put a great deal of primary documents online comparing our two countries’ many parallel experiences on the Eastern and Western frontiers of European civilization. Despite very different political and economic histories, 35 Russian institutions provided material for a bilingual website, which has further encouraged the Library of Congress to launch a world digital library with UNESCO.

Much that is positive has come out of the past 20 years in Russia as well as a lot of disappointment. For all its continuing problems, Russia offers more hope and possibility for a positive and constructive future than we could have expected.