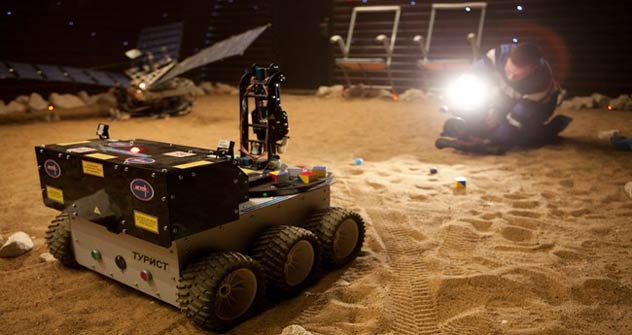 Setting foot on the Red Planet could be more than a futuristic fantasy. Underlining the need for intra-national cooperation in space, Russia and Europe have come together to launch the first manned mission to Mars.

If an American was the first person to land walk on the Moon, the Red Planet could have a more varied intra-national  team landing there in the not too distant future. Jean-Jacques Dordain, the head of the European Space Agency (ESA),  surprised many when announced at an air show recently that the ESA and Roskosmos (the Russian space agency) would carry out the first manned mission to Mars together.

Dordain said this at the International Aviation and Space Salon, MAKS-2011, now under way in Zhukovsky near Moscow. He gave no timeframe, but Vladimir Popovkin, head of the Russian space agency, welcomed his European counterpart’s idea about the coordination of the future project.

The dream of human beings trying to reach Mars has a long history, but mankind seems to be closer than ever in making this dream real. Some time ago, an interest in the Red Planet was linked to the possibility of encountering humanoids. Later, it became clear that the probability of such a meeting is almost zero, although some kind of life could be found there.

However, the experience in space exploration over more than five decades shows that coordinated efforts in this area provide better results than competition. At the same time, it’s not an easy task to achieve mutual understanding in all areas, says Igor Lisov, analyst of the Moscow-based journal “Novosti Kosmonavtike” or “News of Cosmonautics.” “Space exploration history teaches us that even assurance given by the US president is insufficient to implement a space programme linked to complicated targets,” says Lisov.

“For example, only one out of the three attempts to fly to the moon was realised. Similarly, the decision of the space agencies and their agreement on a manned mission could not be implemented without the support of the leaders of the countries, in this case, Russia and the European states. Organization of such a mission is the government’s task. In the future, it will be intergovernmental work,” says Igor Lisov.

In fact, there is an intergovernmental decision to this end. In 2006, the member states of the ESA adopted a large-scale project to launch the “EkzoMars” rover in which Russia will be directly involved. The rover will be launched by the Russian-built Proton rocket in 2013 and it will be partially supplied with Russian equipment. However, the launch of a manned mission to Mars depends on the leaders of Russia and the member states of the ESA, says Lisov.

“If they decide to implement an emergency programme, the mission may be carried out in ten years. If it is an ordinary one, then it will take 20 years. This is a long period of time,” says Lisov.

Russia is already coordinating closely with the ESA in carrying out the Mars-500 experiment. This is the third and final 520-day stage of the experiment. The experiment simulates a manned flight to Mars at a facility located in Moscow. During the ongoing experiment at Russia's Institute of Biomedical Problems, the crew stepped on to the simulated Mars surface several times.

The six-person crew of Mars500 are expected to be released from confinement when they "return to Earth" in November. The experiment confines six men to a 550-cubic-meter mock spaceship and is aimed at studying the physiological and psychological impact of an 18 month return trip to Mars.