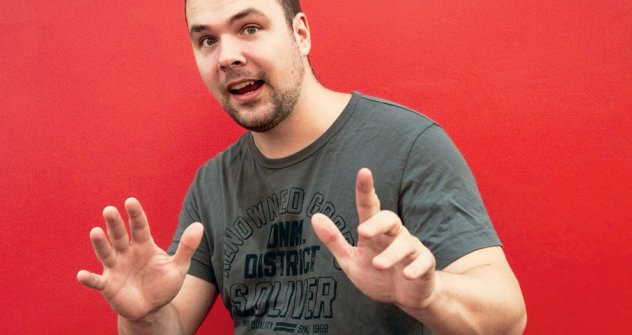 Why is Tim Kirby, the man behind Tsar Podcast, so enthralled with Russia?

The American has arranged to meet me at a kitschy bar, featuring walls lined with wooden spoons and Soviet-era posters. Tim Kirby, who has been living in Russia for seven years, considers himself a Russian patriot, speaks Russian fluently – albeit with a thick accent – and regularly posts short, lively videos about Russia’s tourist attractions on YouTube and on his LiveJournal blog.

At the beginning of the first video of his “Tsar Podcast” series, Tim asks a drunk man on the street: “Excuse me, where is Red Square?”

And yet, Tim went on to make videos about various things in Russia unknwon to the West like the Arbat, VDNKh, the Space Museum, Suzdal, Kirov, and more. There are a dozen or so in total. Tim acts as a guide, while radio DJ and blogger Pavel Kartaev directs the videos. “Tim is going to show you his Russia… Historic… Tasty… Beautiful…” says the text at the start of every episode over images of St. Basil’s Cathedral, a painted bowl of Russian dumplings, and a sexy girl wearing a fur hat flash on a crimson screen.

“I originally made my podcasts for Westerners, so that they could see that people in Russia aren’t evil and don’t want to kill them,” said Tim. “Then I started receiving comments from Russians. And many of them were shocking, many people were angry that I was showing Russia in a positive light! It is hard for me to imagine a Russian guy making videos in the USA about how great America is being told 'you are a naive idiot, our country is shit, go back home'.”

“One guy even wrote me: ‘Our Russian playgrounds suck, in Russia we can't do anything right!’ looking at a photo of a playground in the USA that my wife took. However he failed to notice that there were absolutely no children to be found. In America right now we are living in a time of fear, my native Cleveland is far more dangerous than Russia.”

Tim has another project done exclusively in Russian. Basically, it’s one of the venues for his crusade entitled: “War of Words.” Tim explained part of the reason for doing the Russian language podcast: “There are tons of websites made by Russians themselves about why Russia is an awful place and that any sane person should/would leave. This is madness and their 'logic' for justifying this position is questionable at best” he says. “I’ve also found a LiveJournal community called ‘It’s Time to Get Out of Here.’ I cannot imagine a website in America, made by Americans, about how to leave America for good… I’ve created a counter-community on LJ. If you want to discuss how to become leaders rather than how to flee Russia, let’s get together in my community and talk about how to make Russia a better place!”

“Who is producing these websites calling for people to leave Russia for other countries? What’s their goal?” Tim asked me.

“Perhaps it’s people who are unhappy with the Russian authorities and the model of government they’ve created,” I suggested. “What do you think, Tim, about our authorities? About our managed democracy?”

“Well, there’s no such thing as democracy anywhere,” he replied. Democracy is about as real as goblins and pink unicorns. The main problem with Russia’s authorities is that they aren’t ideologues and they can’t create a dream. They have no passion, and that’s what’s killing this country. That said, I can attest that Putin and Medvedev are better than any of the presidents America has had in my lifetime. (Reagan and beyond) That isn't saying much but even if they are great guys those under them are a crowd of scum. Weak and thieving scum, at that. Nobody believes the government anymore.

“As we say in America, if the game isn’t fair, don’t play it. Set up something outside the system. And make different propaganda. Elections are about emotions and faith. Fight on YouTube, use other technology!”

Incidentally, Tim Kirby recently spoke about actual propaganda and technology at a convention of popular bloggers in Istobensk on a totally different subject. He delivered a presentation entitled: “Why Russians Never Vacation At Home While Americans Never Vacation Anywhere Else?”

The presentation contained some straightforward historic parallels (the U.S. in the 1950s with an ideal American family and lots of cash vs. the Soviet Union with Khrushchev thinking about food), “cultural differences” (a white American learns from the moment of his birth that he came from somewhere where there was depression, famine, and war to America -- the best country in the world -- while Russians learn that their country was forged in failure. Also the only time when Americans en masse went to other countries was WWII and all they saw there was death and despair but Russians who finally got the chance to travel on mass in the 90's saw a Europe that was superior to themselves, shining with cassette players, jeans, and rock-n-roll.” This was all very interesting  “from an outsider’s perspective.”

For example, Tim shows two pictures side by side on the screen. On the left is a website for the U.S. state of Ohio (according to him one of the dullest places in the country) and to the right is a website for the Russian city of Perm (heavily promoted as the new cultural center of Russia). On the left there is an exciting picture under a screaming heading that reads, “Too Much Fun for Just One Day.” And on the right, there’s a weather forecast, a picture gallery of local officials, and a news ticker with headlines like, “Governor Oleg Chirkunov greets participants of the Sawmill-2011 forum.”

But the most intriguing thing about the presentation was the fact that Tim Kirby, an American blogger, took the time to think about the problems with Russian domestic tourism and prepared a sensible slideshow on the subject.

“Russians are more familiar with stereotypes of American cities than they are with their own,” Tim explained. “Los Angeles has Hollywood; Las Vegas has casinos… But what about our own stereotypes? Because “Nasha Russia,” a sketch comedy show, we know that Chelyabinsk is our toughest city. This is a good stereotype and should be exploited! In Russia we can create our own stereotypes and diversify our cities”

“Oh yes. I remember the first time I was considered a Russian,” Tim said. It was three years ago. I was having lunch with my boss, and he started ragging on Americans. And I said: ‘Hey, man, it’s not my fault that America government does what it does.’ And he said: ‘Nah man, I wasn't talking about you, you’re one of us now.’ Russia is my motherland and America is my step-motherlandland.”

“What do you do in Moscow? You can’t make a living off of the podcasts,” I asked.

“I can’t tell you, we have strict corporate secrecy, but I don’t work for any government, American or Russian,” he replied.

“American. But I want a second citizenship, Russian. I’m in the process. I already have a temporary residence permit. I’ll say it: I love Russia.”

“What are your plans for the next Tsar Podcast?” I asked.

“I want to make a video about ‘the dacha,’” Tim said enthusiastically. “That is something unique to Russia. But theoretically, in the future I want to do not only podcasts but also a real political program. I want to make this country a better place.”

“Aren’t you afraid that people won’t like you?” I suggested. “That they’ll think you’ve been planted?” I didn’t pull this idea out of thin air -- I had read a couple of online discussions that talked about Tim this way.

“I want to win and gain power, but for the sake of people rather than to build myself a castle. I think that will be clear,” he answered.  “As they say, the proof is in the pudding. My ideas will either demonstrate themselves as true or they won't. And, don't think I'm naïve I know that working to make Russia a better place will probably earn me a bullet in the brain.”

I nearly choke on the potato chip I was eating. This nice, naïve, and stubborn man who posts Kremlin and VDNKh podcasts on YouTube and is in love with my country is nursing a wonderful American dream in his heart.

“So what would your ideology be?” I asked.

“I’m not ready to come up with a manifesto yet. But here is a teaser: When was the first day of Russia's existence? In America, the day is obvious, and it’s connected with the myth of liberty and the world’s greatest constitution. But the beginning of modern Russia was marked by the collapse of the Soviet Union and by treason. Each culture has a myth about where they came from and Russia’s myth is terrible.

“If we only had a red banner.” Tim picked up a red restaurant napkin and waved it lovingly, “that would mean that everything started in October 1917, and everyone who died for the sake of Communism didn’t die in vain. People built the Komsomol subway with their bare hands for free! They fought wars, they suffered… The first ever right for women to vote, the first free healthcare – Russians led the way with everything!”

While I listened to Tim, I was thinking that he has just channeled into Russia the love that, according to him, every American feels for America. His love for my country is unconditional – like the love of a father for his daughter or of a son for his mother. This love is fanatical; it suffers no doubts and is unconditional. I’m not sure if I’d like to love my country this way. But I’m sure that he is right about one – the most important – thing. “It’s Time to Get out of Here” isn’t the best foundation for the future; it’s a slogan for losers.

“We need a red banner,” Tim says, stroking the napkin. “No matter what it’s called, Communism or something else.”