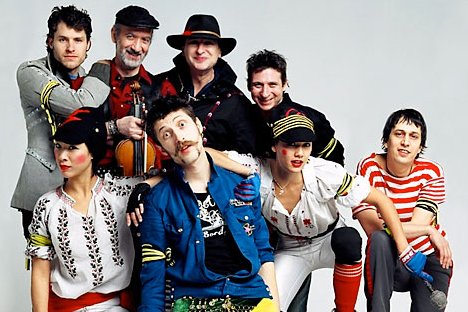 Gypsy-punk band Gogol Bordello was founded in New York in 1999 by Ukrainian émigré Eugene Hütz. It is made up of musicians from Ukraine, Russia and Israel and is known for the theatrical productions of its concerts. For example, during their first major show, the group’s members threw bananas at the spectators from the stage, before dancing on the tables and starting a real fight. Gogol Bordello’s music is a sizzling mixture of gypsy music, punk and folk rock, but it also resembles a cabaret.

Anton Makhrov of Russia Beyond the Headlines met with Eugene Hütz, to discuss Brazilian rap, Russian audiences and musicians from Beirut.

Russia Beyond the Headlines: When Perm declared itself a cultural capital, this, naturally, provoked a skeptical smile. Yet now you see Manu Chao in action in Perm and Nouvelle Vague in the Kuban area. How does your team feel about concerts in the regions?

EugeneHütz:Honestly, I was surprised by the welcome we received in Yekaterinburg, especially by the number of people who knew us. When I came, I was preparing to break the ice (which we did happily in many cities) but there was no need for that here.

RBTH: Is there any fundamental difference between Moscow and other Russian cities? I mean the crowd, the recognition factor and how they react.

E.H.: Of course, perception differs with different audiences. Young people are enthusiastic and that makes all the difference. In the regions, the enthusiasm is absolutely innocent and pure. For example, when we did a DJ set after the concert, I decided to experiment a bit. I simply bombed the people with, for example, Brazilian rap – genuine rap, straight from the favela. It is a peculiar music style that takes a bit of getting use to. I gave it to them together with very tough dubstep. And I unloosed this mixture, this mess (laughs) on them. I was struck by how quickly the people caught on. I don’t know how it would go down in Moscow, but the audience in Yekaterinburg was very receptive.

RBTH: Before you went on stage in Moscow, the organizers put on a Noggano [Russian rap] show.

E.H.: It wasn’t the organisers, I put it on myself. Everything that was played there came from my own DJ mix.

RBTH: Previously such festivals tried to select music by genres to form a single concept.

E.H.: No, no, this question misses the point and challenges the concept of music and its message. Music is all about life-giving energy, vibrations of the air, it’s like… electricity, life-giving electricity and all these concepts are rubbish.

RBTH: The main thing is to grab the audience?

E.H.: You can grab it in different ways, independent of style. In general, I don’t have much use for conceptual approaches. I don’t quite understand what it means. If you are recruiting artists, you should seek resonance and not a concept, people who are on the same energy wavelength. All our shows with Manu Chao are a good example. They are always successful, because the energy is similar. Yes, Manu is Latin Artist numero uno of all time and he brings an energy that transcends all these things. You know, he simply transcends energy. Outside genres and nationalities – this is what one should strive for.

RBTH: It so happened that there is a big “ethno” hole in the Russian musical space. For example, they play it in Ukraine but not here.

E.H.: Ethno-rock is an established genre in the world. Mano Negro, System of a Down – all this is basically ethno-rock, for all the differences. And, as I see it, ethno-rock can only come from the periphery. By Soviet standards, Ukraine was on the periphery.

RBTH: But then the Urals and Siberia are also on the periphery.

E.H.: Well…in Russia, folklore is less well known. I don’t quite understand why - but it is a fact. In Ukraine, folklore is remembered much better. When veterans come out to sing, this is the most authentic thing there is in Ukraine. Even punks come to listen. In Ukraine and in Belarus, there are many avant garde ethnic projects. That genre belongs to people from the periphery. Even System of a Down comes from an Armenian neighborhood – not a neat Armenian neighborhood in downtown Paris, but on the shabby outskirts of Beirut – a diaspora, pure and simple, beyond boundaries. Sing an Armenian song in this neighborhood and you get a black eye.

RBTH: Do you have any plans for the Russian regions?

E.H.: Well, we would like to play gigs in very remote places… like, not only Perm but Irkutsk, Khabarovsk, Komsomolsk-on-Amur. We are very keen to go and see how things are there.

RBTH: You want to see how many people will turn up and how many of them will like your sound?

E.H.: No – how many chicks will come and how many will be at the after party. And how they would be swayed by Brazilian baile funk. Because what I saw in the Urals was very, very impressive. No one in the band slept. Seriously, the most interesting thing is how these regions suddenly come alive when they hear our music. One can see that they are really with it. This is not just a backwater. To me it is a very sudden change and I am very impressed.