The art of dressing well 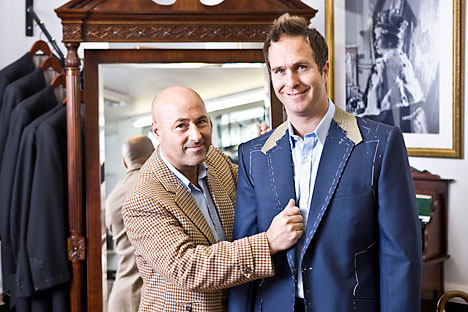 Michael Vaughan, being fitted for a suit at Stowers Bespoke by Ray Stowers in Saville Row. Source: Rex-Features/Fotodom

One of the honored guests at the first annual International Protocol Service Forum held in Moscow last summer was the famous London tailor Ray Stowers, who gave a workshop on clothing as a status symbol.

For 25 years, Stowers was an employee of the famous Gieves & Hawkes company on Savile Row, the London street famous around the world for its bespoke tailor shops. He then served as a tailor in the royal household.

Over the years, Stowers clients have included Saddam Hussein, General Pinochet, Colonel Qaddafi’s sons and Michael Jackson. Say what you will about these individuals, but they were all elegant dressers.

Today, Stowers works with the royal houses of Malaysia, Jordan, Thailand and Saudi Arabia. He says the most taxing job is in Thailand because during fitting sessions the monarch is surrounded by a dozen advisers, each of whom considers it his duty to express his opinion.

Russian clients can be tough, too. “In London, Russians are considered to be among the most difficult, said Stowers. “They are always finicky about their clothes and get angry if they notice an irregular stitch.” However, they are no less sought after as clients, since they have the money and are always ready to spend it to indulge their whims. Stowers discovered the Russian market about six months ago when he started working with high-ranking government officials. It was hard to earn their trust. “They are very uptight people and tensed up when I started asking them ordinary questions, for instance, how they spend their free time. They immediately wondered why I ask. I simply want to understand the person’s lifestyle and what clothes would suit him best,” Stowers said. The clients usually do not have any special wishes and are generally very conservative. But some things are changing. “With one customer, we started with a black suit, then moved on to stripes, and perhaps some day we will graduate to pink,” Stowers joked.

As for black, he can put his finger on it. Many Russian officials, especially in the provinces, still consider it the only acceptable color for a business suit. Even current Prime Minister Vladimir Putin labored under this misapprehension. At the start of his term as president, he preferred dark suits. A fashion writer for a Western periodical caustically compared him to a funeral home employee after the Russian president showed up at an informal G8 meeting without a tie but wearing his invariable black suit.

He never made these style blunders again. Today, Putin’s wardrobe contains many light-colored suits, which obviously become him. He is said to have his business suits custom made in Italy. In any case, Putin is not listed as a client on the Kremlin’s tailor service list.

The metamorphosis of Putin’s style over the past 10-15 years is typical of the rest of the Russian elite. In Soviet times, the notions of “fashion” and “business suit” were incompatible. All the Soviet leaders had their clothes made at a special tailor shop as if from the same pattern: The suits all had to be subdued and baggy.

When all the restrictions were lifted in the 1990s, things moved to the opposite end of the spectrum with everyone dressing any way they liked. The Presidential Administration’s protocol assistance employees recalled that in those years people came to official receptions wearing blazers and ties with palm trees. One deputy foreign minister favored gaudy vests and yellow shoes.

Today, Russian men who hold important jobs in business or politics are learning the difficult science of dressing modestly, but expensively and elegantly. Many have taken to ordering bespoke suits. The dominant force in that market in Moscow is Indian-born businessman Sammy Kotwani. His success story is typical. He came to Moscow in the early 1990s on the advice of his Western partner. “He told me that Moscow would soon be an excellent place for this business and advised me not to spread out to other areas but to concentrate on making suits,” Kotwani said.

It was million-dollar advice. It was an uphill struggle, but the businessman quickly set up a profitable enterprise. He started making suits for employees of foreign embassies and companies. When most of his clients left Moscow after the 1998 crisis, Kotwani realized that he had to make his pitch to local bureaucrats and businessmen. That strategy paid off. Today Kotwani casually drops names like Sergei Lavrov, Yevgeny Primakov, Kirsan Ilyumzhinov, Nursultan Nazarbayev, Yury Luzhkov and many others. They say his connections in high places have helped him become the president of the Indian Business Alliance in Russia.

The switch to a different clientele forced him to change some important elements of his business. He gave up fabrics from Hong Kong and now only uses British cloth. The suits are made in London according to measurements taken in Moscow. Russian clients will not settle for anything but the very best, Kotwani explains. That is why his shop, located a stone’s throw from the Kremlin, has King George furniture, intended to create an atmosphere of exclusivity for the client.

However, it looks as if Kotwani’s monopoly on the Russian bespoke market is coming to an end. Ray Stowers may turn out to be the first to follow, having traveled from London to Moscow to get closer to clients who are developing a taste for quality clothes. For his workshop at the forum in Moscow, Stowers brought samples of fabrics he is sure will appeal to his Russian clients, including cloth laced with chinchilla fur (very thin and silk-like to the touch) and another fabric with threads made from platinum and 24-carat gold. A suit made of this cloth costs $32,700 (five times more than one made of conventional material).

Stowers claims that one of the merits of his suits is that they can be worn for 10-15 years without any loss of quality. It remains to be seen, however, whether this is all that important to Russian clients.