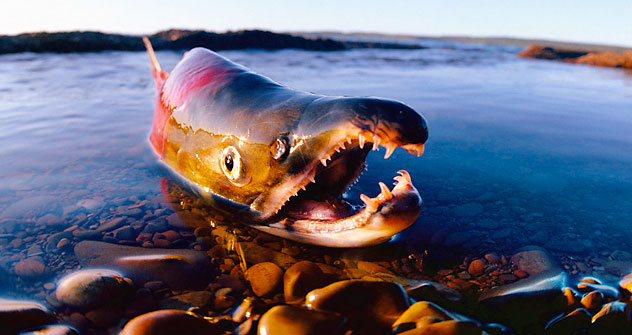 Irina Daletskaya has been photographing Kamchatka’s exotic natural landscape for 25 years and has constructed a unique collection of images.

“It was not I who chose Kamchatka, but Kamchatka that chose me, and it is my mission to show this place to people,” said Irina Daletskaya, a beautiful and elegant woman, whom visitors find hard to imagine braving snowstorms and cold in the wild north.

“It is a unique, pristine region. I think this is how our planet must have looked when life began here,” Daletskaya continued, with passion. “It is a kind of open-air museum, only you need a helicopter to reach the exhibits.”

Daletskaya dreamed of going to Kamchatka while she was studying geology at Kiev University. “In the few photographs available at the time, I was struck by this fantastic land. It became the only place on the planet to draw me like a magnet,” she said. After earning enough to support herself by participating in a northern expedition, Daletskaya set out in search of her dream, carrying a camera.

During that expedition, Daletskaya met Dr. Alexander Svetlovsky, a volcanologist who was impressed by the young geologist’s skill in capturing the beauty of nature in the crisp frame of a photograph. He brought Daletskaya along as a photographer on an expedition he arranged to Kamchatka's live volcanoes. On that trip, Daletskaya worked with the eminent Soviet photographer Vadim Gippenreiter, who became her mentor.

“When I worked with Gippenreiter, photographing the same objects from the same helicopter, I tried to develop an individual and recognizable hand as a photographic artist. Being next to a maestro and trying to depict the same object in a different way is a tall order,” Daletskaya said.

Time has shown that Daletskaya rose to this challenge. “I think only Daletskaya has managed to develop her own style in photographing Kamchatka,” said photographer Vladimir Zykov. “She is adept at finding the point from which to photograph, and she is very original.”

Apart from everything else, Daletskaya’s career as a photographer exposed her to the wildness of nature. “Once during a session, a mother bear with her cubs approached us. Our guard pricked up his ears. The bear snorted to tell the cubs to sit near us and went fishing. The well-behaved cubs played with one another without leaving the place while we enjoyed protecting them from the male-bear while the mother was fishing.” (Editor's note: Bears are cannibalistic and male bears pose a serious threat to cubs).

Bears, like people, have different characters. Forest rangers and photographers give them nicknames that match their behavior. “One of the bears, who could dive for fish deeper than his relatives, was nicknamed Diver,” said Daletskaya. “That skill was his competitive advantage, saving him from hunger while others waded in shallow water waiting for fish to come their way.”

To get the perfect photograph of nature in rugged terrain, Daletskaya stressed that sometimes a single frame is preceded by several years of work and repeated sorties by helicopter. If the scene is not captured, the attempt may be postponed until next year.

“For example, in 2008, after many years of trying, I finally managed to capture the unique moment of the Karymsky Volcano eruption,” Daletskaya said. “After a hard day’s work in freezing cold and wind, and with a 20 kilogram knapsack on my back, I had to spend the whole night in the dark with my camera at the ready and my gaze fixed on the volcano, hoping to see an eruption that might or might not occur. The volcano came to life at 4 a.m., illuminating the night sky with a colorful eruption and bolts of lightening generated by the friction of ash particles. The eruption lasted no more than a minute, and the following day the volcano fell silent.”

Daletskaya returns with three or four such “jackpots” from every expedition, little masterpieces that require a confluence of many natural circumstances to be repeated. “These photos are not optical or computer technology miracles, but a combination of unique natural objects and rare states of the atmosphere. The phenomena offered by nature often exceed all my dreams and plans,” Daletskaya said.

During her numerous expeditions, she has formed a clear plan of how to show Kamchatka—“It should be an album consisting of unique 'jackpots' that would become geographical sensations of sorts.”

To preserve the integrity of her plan, Daletskaya turned down an offer to collaborate with Corbis, a leading global photo agency, until her album came out, an unprecedented act in the photographers’ milieu—especially during the difficult period of perestroika,. “During perestroika I, like many, could barely scrape by, but I deliberately refused this offer in order to preserve my exclusive material,” she said.

“I pay for my job, and not the other way around,” Daletskaya said, ironically. “Everybody spends money to buy cars, houses and cruises, but I have to invest whatever money I can raise into the implementation of my projects, which is little short of martyrdom. This is my life’s work, and I would like my project to prove that Kamchatka is a masterpiece of planet Earth.”