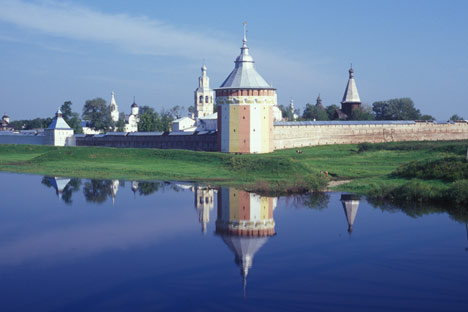 Although small, Vologda has an outsized cultural and architectural heritage.

Despite its relatively small population (slightly over 300,000 inhabitants), Vologda has a significant presence in Russian culture. The town, located about 300 miles north of Moscow on the Volodga River, is home to an array of vibrant cultural institutions as well as many architectural monuments. With active artistic and literary groups, Vologda is also closely associated with the life and work of the writers Varlam Shalamov (1907-82) and Nikolai Rubtsov (1936-71). Its newest museum is a palatial structure devoted to the craft and art of lace making.

The "official" date of the city's founding is given as 1147 (the same year as Moscow), yet there is no verifiable information to support that date. Indeed, no firm archeological evidence has been uncovered to confirm a Russian presence earlier than the 13th century. By that time, the Vologda area was under the control of the city-state of Novgorod, located some 310 miles to the west and one of the most important economic centers of medieval Russia.

With the growth of Moscow's power in the 14th century, however, Vologda was pulled into the Muscovite orbit along with the rest of the historic Russian north on the path to the White Sea. By the end of the 14th century, Moscow had its own representatives in the town; and a century later, after a prolonged and complicated struggle, Vologda and its surrounding territory were taken into the Moscow principality.

By the middle of the 16th century, Vologda had become the major trading and administrative center in northern Russia. Despite its small size, the Vologda River was linked to the Dvina River basin to the north and was close enough for portage to the Sheksna River, linked to the Volga River basin. Vologda thus served as the primary distribution point for rapidly increasing trade with England, and subsequently Holland, by way of the Dvina River to the port of Arkhangelsk. Although sacked and devastated by marauders in 1612 during the Time of Troubles, Vologda retained its strategic importance until the development of St. Petersburg in the 18th century.

Vologda was built entirely of wood until the reign of Ivan IV (the Terrible), who in 1565 included the town in his private domain (oprichnina) and initiated construction of a masonry fortress, apparently to serve as his northern residence.  After 1571 this enterprise was abandoned, and the walls were eventually dismantled. Yet one important monument from that period remains:  the Cathedral of Saint Sophia.  Built in 1568-70, it is an excellent example of mid-16th century church architecture based on Aristotle Fioravanti's Dormition Cathedral (1475-79) in the Moscow Kremlin.

Fortunately, the Vologda Cathedral of St. Sophia has been well preserved.  Its simple but imposing whitewashed brick walls lead upward to five onion domes, which provide a striking visual culmination to the structure. The interior is covered with a stunning display of late 17th-century frescoes by artists from the city of Yaroslavl. At the eastern end is a massive icon screen (dating from the late 1730s) that soars to the rim of the central cupola. The Sophia Cathedral interior is one of the most impressive examples of religious art in Russia.

The area adjacent to the Cathedral of St. Sophia is embellished with a tall bell tower (expanded in the 19th century, with an observation platform) and the secondary Cathedral of the Resurrection, built in a mixture of baroque and Neo-gothic styles in the 1770s.

The cathedral ensemble leads to a walled compound popularly called the “kremlin,” but informally known as the Archbishop’s Court. This attractive collection of churches, residences and service structures is now the center of the excellent Vologda State Museum.

Beyond the central cathedrals, Vologda's church architecture reveals a considerable variety of forms, but unlike other major centers to the northeast of Moscow, such as Yaroslavl and Kostroma, Vologda produced no distinctive local style. Nonetheless, there is much of interest, such as the Church of the Beheading of John the Baptist, located in a park in the center of the city. Dating from the early 18th century, its octagonal main structure is completely covered on the interior with frescoes painted in 1717 by artists from Yaroslavl.

The wealth of Vologda in the late 18th and 19th centuries is reflected in a number of houses, in both brick and wood, that have survived throughout the town. Indeed, Vologda was known for the variety and extent of its wooden housing. Neglect, indifference and lack of resources have taken their toll on these charming wooden residences—as in so many Russian towns.

More traditional forms of wooden architecture have been preserved at the Architectural-Ethnographic Museum at Semenkovo, to the west of Vologda. On display at this outdoor museum are houses, barns, a chapel and the reconstructed Church of St. George from the north central part of the Vologda region.

And just to the northeast of town is the historic Savior-Prilutsky Monastery, founded in 1371 by St. Dmitry of Priluki. Its Cathedral of the Procession of the Precious Wood of the Life-giving Cross of the Lord (1537-42) is the oldest surviving structure in the Vologda area. Situated at a bend in the Vologda River, the monastery is one of the region’s most picturesque sites.