Belaruskali turns away from Russia 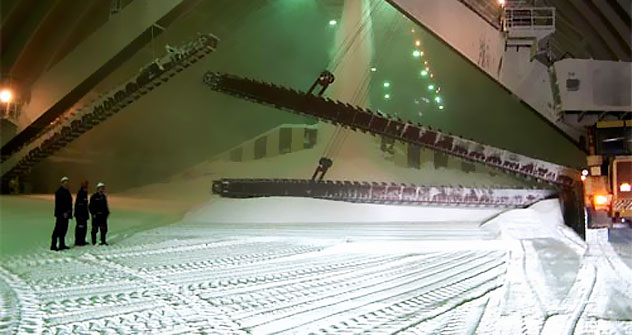 Minsk is planning to refuse a loan of $2 billion, which Russia is offering using a 35% stake in Belaruskali as collateral. Sources say that Alexandr Lukashenko received a much more favourable offer from India. But experts think Russia will still get a stake in Belaruskali, and that Lukashenko is just using this asset as a lever to put pressure on Moscow during negotiations on energy resources.

The conditions of the $2 billion loan proposed by Sberbank and Deutsche Bank do not suit the Belarusian contingent, says Valery Kirienko, general director of the company. The banks are only prepared to grant a loan if it is secured with a 35% stake in Belaruskali.  “Under the conditions offered by the Russian party I am sure that our government will not agree to accept the loan," said Kirienko at a press conference in Soligorsk.

In the meantime Belaruskali received a $300 million loan from Azerbaijan. “We acquired bonds with these funds. So these funds were actually transferred to the foreign exchange reserves of the National Bank”, said Kirienko. He did not comment on the conditions of the loan.

Experts admit that Belarus is more than justified in the way it is dealing with this issue. “Alexandr Lukashenko previously valued Belaruskali at $30 billion, and our valuation was around $20 billion” says Yuri Volov, an analyst from the Bank of Moscow. “Even the most conservative valuation of a 35% stake would be in the region of $7 billion, therefore the Belarusians are fully within their rights to haggle for the loan conditions”.

Moreover, Minsk has a more appealing option other than just taking out a Russian loan. “India wants to buy 15-20% of Belaruskali and is offering $6-7 billion for the package, says a source from Gazeta.ru who has been following the negotiations. “The Indians want to be involved in pricing the business’s production and it is easy to understand why: literally a week ago India closed a contract for the next batch of Belaruskali fertilizer, and the price was 50% higher than it was a year ago”.

The fact that India was interested in Belaruskali was announced on 4 August by the Indian Ambassador to Belarus, Manoj Kumar Bharti. And the next day Russia offered Minsk a loan: on the morning of the 5August the head of Sberbank German Gref reported to the Prime Minister Vladimir Putin that his bank, in alliance with Deutsche Bank, were prepared to offer Belaruskali a $2 billion loan secured by a 35% stake in the company. Citing a source involved in the Belarusian financial sector, Interfax news agency reported that these funds would be put into Belarus’ gold and foreign currency reserves, i.e. the loan was actually taken out by the Belarusian government.

Russia has interests in Belaruskali. At the beginning of June it emerged that Nafta Moskva, controlled by the Russian businessman Suleiman Kerimov, was on the point of closing a deal for the acquisition of a controlling stake in the company for $15 billion. It was suggested that Belaruskali was going to strengthen Kerimov’s position in the chemical business (the entrepreneur controls Uralkali, which following a recent merger with Silvinit, became one of the leading global players in the potash fertiliser market). However the First Deputy Prime Minister of the Government of Belarus, Vladimir Semashko subsequently revealed that the Belarussian government was not planning to sell its stake in Belaruskali. But at the end of June Minsk announced that it was planning to sell 10-15% of shares in the company on the stock exchange. Belarus values the whole company at $30 billion, although the company has not been audited by international auditors.

Experts suggest that in the fight for the company, one way or another victory will be with Russia. “Taking out a loan for Belaruskali has gone from being an economic issue to a political one”, says an analyst at IFC Metropol, Sergei Filchenkov. “The Belarusian government is going to see it from the point of view of Belarus-Russia relations”.

But a deal with the Indians is not going to benefit Belarus politically or economically. India is one of the biggest importers of fertiliser, and it is unwise to let the consumer have an influence on the price of the producer”.

Kirienko’s announcement needs to be seen as an indication of the company’s trading position”, says the expert: “It is not impossible that in the near future the very same Sberbank and Deutsche Bank will increase their valuation of Belaruskali and offer a loan on more attractive terms.