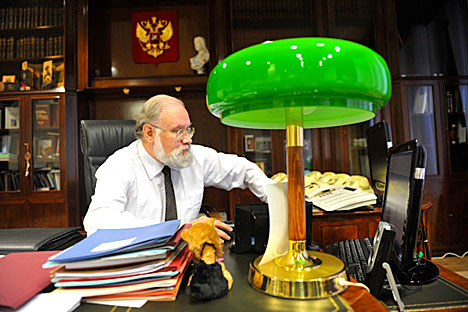 Elections for the State Duma, the lower house of Russia’s parliament, are approaching; the vote is scheduled for December. This election differs from previous ones, however, in that the deputies who are elected will remain in office for five years instead of four, as was the case previously. The constitutional majority currently held by the United Russia party, headed by Prime Minister Vladimir Putin, is also at stake. This majority has formally enabled the party of power to pass legislation without regard for the opinion of other deputies. So the main question of the December elections is whether the opposition will be able to force United Russia to make room for them in the State Duma. The results of the vote could also affect the March 2012 presidential election, in which Russia’s head of state will for the first time be elected for a six-year term, rather than four-year term.

The race for parliamentary seats will be overseen by the Central Election Commission, a government agency authorized to monitor the legality of election campaigns and vote counting. The last Duma election, in 2007, was marred by a number of scandals when the opposition and prominent public figures complained of violations and falsifications in favor of United Russia. However, in every case, the Central Election Commission either ruled the violations minor or failed to find evidence supporting the allegations. As a result, international observers said the elections did not meet the “free and fair” standard. Some European observers refused to come altogether, citing unacceptable restrictions imposed by the commission on their activities in advance of the elections. Other observers, including those from CIS countries, found no violations and were satisfied with how the election took place, while the Commission accused the Europeans of bias and an attempt to influence the results of the vote.

In light of those events, the way the current campaign is conducted and the assessment it receives are of paramount importance. Commission head Vladimir Churov, stated in an interview: “Two factors determine the legitimacy of elections, the most important being the turnout.” At around 60 percent and constantly increasing, Russia’s turnout tends to be higher than in some European countries and the US. The second criterion, according to Churov, is “parliamentary representation, i.e. the percentage of votes cast by the total number of voters for candidates who get elected.”

The percentage in Russia is 92 percent, according to Churov, meaning that in 2007 only 8 percent of voters favored Duma candidates who didn’t get elected. “This is a very good European result,” he concluded.

The Election Commission’s most complicated relationship is with observers from the Organization for Security and Cooperation in Europe (OSCE), which gave the harshest assessment of the 2007 elections. Churov singled out for criticism the OSCE Office for Democratic Institutions and Human Rights (ODIHR), which strengthens and protects democratic institutions in OSCE countries, including through election monitoring. Churov said that the ODIHR’s mission was “politically motivated,” citing an analysis of the mission’s operations in 2010–2011 in Estonia, Moldova, Kazakhstan, and Latvia. He said that, “with regard to Latvia, Estonia, and Moldova, where the elections received positive assessments, the findings didn’t match the contents of the reports. That is, the conclusions were positive while the contents were negative. In Kazakhstan, it was the other way around.”

The restrictions that caused the OSCE ODIHR mission’s refusal to come to Russia for the previous elections included limits on the number of observers. The OSCE, which opposes the Russian restrictions, may once again refuse to send its observers to the Duma elections. Russia’s Central Election Commission hasn’t budged on the issue. Churov is also perplexed at why the OSCE sends different numbers of observers to different countries: “Six to Bulgaria, 11 to the UK, 60 to the U.S. presidential election in 2008.” Churov said that the OSCE sent 2,762 observers to Ukraine’s presidential election in 2004, pointing out that the election was followed by the Orange Revolution and an “illegal second-round recount.” In other words, while Russia’s top election official doesn’t trust OSCE observers, he obviously doesn’t want to quarrel with them either.

This is in particular evidenced by the fact that the commission has sent a letter to observers, including those from the OSCE, asking for suggestions about how many observers they would like to send and where. “This is unprecedented,” Churov said, stressing that in Russia, unlike in many other countries, “the rights of foreign observers are essentially equal to the rights of Russian observers.” According to Churov, “they have the right to attend commissions at all levels, including district commissions. This includes the voting day, early voting days, the vote counting, and recounts. In other words, they can attend all proceedings at polling stations.” “When we requested this at an election in Finland, we were turned down,” Churov said. “And that’s not to mention the numerous restrictions found in various U.S. states.”

ODIHR experts visited Russia for a week in August to determine what the format of the observations will be for the December election. It was supposed to be a report on the state of the Russian election system, something the Election Commission rejected in advance because the ODIHR experts were “mere guests” with no official standing as an assessment mission. In his interview Churov explained, “Foreign observers have the right to publicly express their views on electoral legislation and on the preparation and conduct of elections, as well as to discuss the topic with the media only after voting has closed throughout the territory of the Russian Federation.” He says, “It’s not right when they try to observe an election that hasn’t been called yet. To state that an election will be one thing or another six months before it’s even called makes no sense; it’s pure politics.”

Churov sees nothing unusual in the fact that United Russia, which holds a parliamentary majority, has only 2.2 million members, or less than 2 percent of Russia’s citizens. “So what?” Churov said. “In America, there are very few card-carrying party members. And in most European countries, the number of party members is far smaller than the number of voters.” He says that this is how it should be and “that’s what we fought for in 1991: for the voter to have a real choice.”

According to a July poll by the independent Levada Center, Russians consider only two of Russia’s seven registered parties to have real political clout: United Russia and the Communist Party (KPRF). The public views the rest as “puppet parties controlled by the Kremlin”. Some 72 percent of Russians believe Russia needs a political opposition to the authorities but that existing parties don’t fit the bill. That’s why 73 percent of Russians favor putting an “against all” option, removed for the 2007 election, back on ballots. However, the Central Election Commission’s head says that “against all” is out for good: it “has been abolished throughout Europe,” and Russia, “as a conscientious member of the OSCE has implemented a 2004 ODIHR recommendation” on the matter. “There is no ‘against all’ candidate,” and “introducing this option is aimed at misleading voters,” the Commission’s head pointed out.

As for the fact that new political parties are being denied registration in Russia, Vladimir Churov says that is the responsibility of the Ministry of Justice, and not the Central Election Commission.