The bright side of the delayed frigate delivery to India 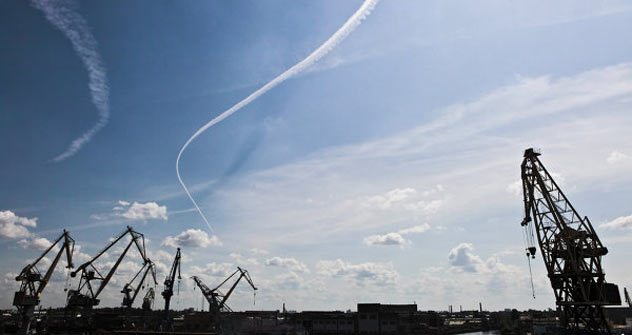 India has announced that Russia delayed its delivery of three frigates to the Indian Navy by over a year. Given the circumstances under which the contract was made and executed, the delay could have been even longer.

The timetable for manufacturing the three frigates for India (the Tag, Tarkash and Trikand) has been pushed back significantly, says the Indian military. The Tag should have been delivered in April. However, the date has been postponed for 12 months, according to a statement by the Indian Defense Minister A. K. Antony. The Tarkash, which was expected to join the Indian Navy in October 2011, will be 11 months late, and the Trikand, scheduled for April 2012, will be 14 months overdue.

Antony said the delays were caused by "a shortage of skilled labor capable of building several ships simultaneously," and he also noted flaws in the production chain resulting in delays of equipment deliveries from Russian subcontractors.

The three Project 1135.6 frigates are being built at the Yantar shipyard in Kaliningrad. All of them have been set afloat and are close to completion.

The three frigates under construction at Yantar constitute India' second order for ships of this type. They were actually created specially for the Indian Navy as extensive upgrades of Soviet-era Project 1135.1 frigates. The contract to build the first three frigates - the Talwar, Trishul and Tabar - was signed in November 1997, and was valued at about $1 billion.

St. Petersburg's Baltic Shipyard (Baltiisky Zavod) was chosen as the manufacturer. A number of innovations were incorporated into the modified ships. For example, the ship is equipped with Club-N anti-ship missiles - the export version of the Caliber missile system - which is only now finding its way into the Russian fleet.

The Baltic Shipyard missed the delivery deadlines for the first border of frigates. The last of the three ships reached India only in April 2004; 2003 was stipulated in the contract. There was nothing surprising about this, and it did not cause a scandal. The export-oriented Russian defense industry has only recently become capable of major industrial production, and New Delhi has reacted to the delays with understanding.

In 2006, having gained operating experience with the first three frigates, Delhi ordered three more ships from Russian shipbuilders. Initially, India wanted six such frigates at the same time, but at the last minute the decision was made to order just three. The new contract was valued at $ 1.6 billion.

The Baltic Shipyard did not receive the contract for the second consignment of three frigates. After extended talks, it was given to Kaliningrad shipbuilders.

"The Yantar plant was given the second series of ships for political reasons," said Konstantin Makiyenko, deputy director of the Center for Analysis of Strategies and Technologies. "This was done not so much to support the specific plant as the economy of the entire Kaliningrad exclave."

The Yantar plant was in a terrible state in terms of both finances and personnel. But India, which agreed on the executor of the contract, has no real cause to complain. If New Delhi had firmly insisted on its terms and demanded that the contract for these ships be given to the familiar Baltic Shipyard, Moscow would have most likely met them halfway, so as not to miss out on these lucrative contracts.

However, despite the noticeable delay cited by the Indian side, the Kaliningrad plant is filling the orders. The problems faced at Yantar are similar to those faced by the Baltic plant in the case of the first batch of frigates. Having no stable income, the Yantar plant took its time to restore production capacity and the skill level of its workforce, as well as to arrange production with subcontractors

The plant just barely eked it out, but the job was completed, despite the terrible conditions at the outset. Konstantin Makiyenko said that initially the problems were such that one could have expected a much larger delay than the one currently cited by the Indian side.

"By all appearances, the plant is all warmed up from filling the order and will work more smoothly in the future," he said.

In addition, it should be noted that the Russian Navy itself has placed orders with the Yantar plant after evaluating the Project 1135.6 platform based on the Indian contracts. The plant laid the keels for the flagship frigate Admiral Grigorovich in December 2010 and the Admiral Essen in July 2011. It is also expected to lay the keel for third frigate, which according to a number of sources will be named the Admiral Makarov.