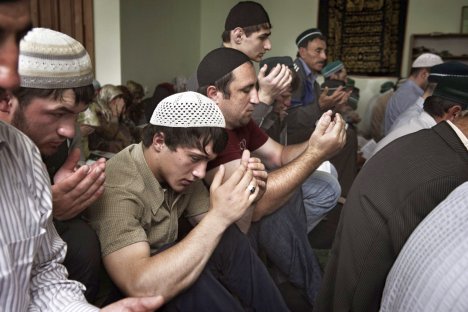 Students pray at the university in Makhachkala where Maksud Sadikov was rector. Photo by Yury Kozyrev

The perils of outreach and bridge building are amply clear in Dagestan as reformers are assasinated and protests go unheard.

The city of Khasavyurt was melting in the summer heat as local activists prepared for a scheduled protest in the town square last month. Just as the demonstrators were about to gather to protest, in hopes of engaging city leaders, an explosion ripped through a colorful stand stocked full of fruits and vegetables and opened a five-foot-deep crater in the street. Ambulances rushed eight injured civilians and policemen to local hospitals. A crowd of curious passersby gathered, and then thinned out as Friday prayers began.

After prayers, hundreds gathered again, determined to have their protest. They were swiftly surrounded, then pushed aside by police. The gathering tension eased this time, and the street, covered in garbage and blood, emptied.

Bombings are not rare in this border city between Dagestan and Chechnya, despite the fact that the First Chechen War ended here in an agreement known as the Khasavyurt Accord. In the first six months of 2011, the number of terrorist attacks increased 35 percent over the same period in 2010, according to Alexander Bastrykin, the chairman of the Investigative Committee of the federal Prosecuter General’s office.

From Maksud Sadikov's interview to Russia Beyond The Headlines

And if there is one event of the summer that is emblematic of the marked increase in violence here, it is the murder of Maksud Sadikov, an Islamic reformer and university rector. He was gunned down in July in the center of Dagestan’s capital, Makhachkala. One year ago this month, Russia Now interviewed Sadikov as he pledged to work as an emissary between Muslim educators, students, civil society and the state. But his work was cut short, a serious blow to the peace process, according to Dagestani officials.

During the last year of his life, Sadikov spent much of his time encouraging and directing dialogue between policy makers and religious leaders.

He was one of 12 moderate religious leaders killed in the North Caucasus in the last 18 months.

In June, he helped organize the first large-scale round table, called the Council for Civil Society and Human Rights, in which Kremlin officials met with local community leaders. A few days later, Sadikov was killed by two gunmen. He and his nephew stepped out of a car and were sprayed with bullets.

Maksud Sadikov was, by the accounts of all who knew him, one of Dagestan’s heroes. Beloved by his students at the Islamic university where he was rector, he was also friend to the president of Dagestan, as well as other politicians and leaders who believe that Dagestan deserves a peaceful future. Sadikov was born in 1963 in the town of Archid, Dagestan, and received his doctoral degree in government administration from Moscow State Lomonosov University. He could have stayed in Moscow, where he was educated, to pursue a career in government. Instead, Sadikov, a practicing Sunni Muslim, chose to return to Dagestan. He became rector of the Institute of Theology and International Relations in Makhachkala, the capital city, in 2003. In 2010, he began to work with the Kremlin as the government made a push for a moderate Islam in the North Caucasus. He was gunned down in June by unknown assailants.

Magomedsalam Magomedov, the president of Dagestan, said Sadikov was “a key figure in peace negotiations.”

“He was murdered by those who aim to wreck the negotiation process,” Magomedov said. “I would not look for any third powers here. These murders are committed by local radical groups, and they destroy the peaceful meaning of Islam.”

Magomedov’s grief shows on his face. He said the death of Sadikov is a serious blow to the movement toward reforming Islamic education, encouraging moderate Islam and moving forward within a peace process.

Several of Magomedov’s friends and colleagues have also died in attacks by what he calls “bandits, extremists and terrorists,” including the president’s press secretary, Garun Kurbanov. Like Sadikov, Kurbanov was outspoken against extremism and religious intolerance.

If last summer police officers were mostly shot by snipers off the rooftops, this summer the attackers walked straight up to senior investigators and a police commander, and shot them in the face, right before the eyes of their relatives and friends.

Abdurashid Bibulatov, a police colonel, said that the killing of Sadikov was the militants’ response to the peace process. “Most of them have laptops and Internet flashcards in the forest,” he said. “Judging by the chronology, Sadikov’s murder was the reaction to the peace talks he was involved in.” The president expressed his concern about flashcards left in mailboxes containing threatening videos demanding ransom; he is trying to encourage Dagestanis who receive such video messages to report them.

Community leaders try to gather for a protest but are dispersed by police. Photo by Anna Nemtsova

In Khasavyurt, local activists said police are also to blame for the rise in violence: Rasul Islaimov, a representative from Civil Alternative, a local non-governmental organization, said that earlier that month police threw grenades into a private mosque in Uzun-Otar village and killed Nariman Aligadzhiyev, a father of four children who built the small mosque in his garden for the village’s Muslims who practice Wahhabism, the most conservative form of Islam. This was one reason area activists tried to protest and engage local leaders. A bombing prevented the protest; police dispersed them.

“We see efforts by the president and his team to calm down the critical situation in Dagestan this year, but unfortunately some police special operations end with murder, torture and the disappearance of peaceful civilians, which undermine the trust people have in the authorities,” said Tatyana Lokshina, a Moscow-based researcher for Human Rights Watch.

At Sadikov’s university, professors and students mourn their rector, but few appear willing to take on his peace mission. But even after the darkest of summers, the president said he is determined to win the growing conflict.

The president’s agenda includes weekly meetings of a commission created to urge former guerillas to join the peace process. So far, around 30 former fighters have agreed to put down their arms in exchange for state support in finding jobs and education.

A weekly meetings of presidential commission. Photo by Anna Nemtsova

During the commission meeting held last month, one fighter was granted the right to serve a prison term at home. Zaipulla Gazimagomedov will now serve his 10-year sentence in Dagestan. “Young people ran from an unfair life to join our troops,” the former guerilla said. “The main reason they go to fight is desperation.”