Friendships forged on the cruellest sea 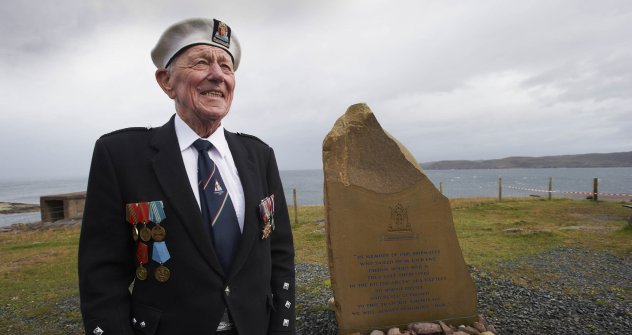 Seventy years ago last week, the first Arctic convoy left for Russia. Churchill called it ‘the worst journey in the world’; 3,000 British sailors had died by May 1945. But two nations found friendship in adversity.

A visitor to the 2012 Olympic yachting events in Weymouth who strays into the Nothe Fort museum might be surprised to see a Soviet sailor’s hat. It’s a gift to the Dorset museum from Eric Alley, a local resident who was presented with it in Armenia in 1989, when he was working there for a United Nations disaster relief team after an earthquake.

At a dinner on Mr Alley’s last night in the country, his host asked him if he had ever been to the Soviet Union before. “Yes, in 1941,” he replied. After a brief pause, the host said: “But that was in the Great Patriotic War. Where were you?” Mr Alley grins  at this point in his story and says: “Murmansk.” “Ahh,” said his host as the penny dropped. “The Arctic convoys.” From that moment, Mr Alley was a firm friend. He was given the hat and made an honorary member of the Soviet navy. Arctic convoys don’t figure on the school curriculum in Britain’s classrooms, but the story of the British and Allied sailors who braved what Sir Winston Churchill described as “the worst journey in the world” has been taught in Russian schools since the war ended.

It was Churchill who proposed the convoys, following Operation Barbarossa, Germany’s invasion of Russia. He promised to supply Stalin “at all costs”, knowing that, had Russia fallen, the full weight of the Nazi machinery would have been directed at the West. War Cabinet documents now available in the National Archives called for sending “the maximum this country could afford… We must supply her with munitions to the limit of our ability. To do less would increase the dangers of Russia’s making a separate peace.”

Mr Alley, originally from Preston in Lancashire, was on the first Arctic convoy, code-named Operation Dervish, which left Hvalfiourdur in Iceland on 21 August, 1941. By then, Norway and the Baltic states had been overrun by Germany, and the only way that supplies could reach Russia was through the ports of Murmansk and Archangel, which are both inside the Arctic Circle.

Every 10 years since 1985, Russia has struck a commemorative medal to give to the British Arctic convoy veterans in formal recognition of the critical role they played in carrying vital supplies to Russia. In Ocober 2006, the British Government issued veterans with the Arctic Emblem to show its gratitude for the heroism they displayed in the face of terrible hardship. The emblem can be worn on the lapel but cannot officially be worn alongside campaign medals.

He had twice tried to join the navy since war broke out but it wasn’t until his 18th birthday that he could be accepted. He volunteered for the first active role that came along, which was for a radar operator, and after three weeks’ training he joined the destroyer HMS Inglefield. Between August 1941 and March 1943, Mr Alley would make 15 convoy journeys to Russia in his ship from its base in Iceland.

On that first journey to Archangel, HMS Inglefield was deployed as part of the screen for the convoy. “Most of the merchant ships were very ancient,” says Mr Alley. Their cargo included 10,000 tons of rubber, 3,800 depth charges and magnetic mines and 15 Hurricane fighter planes. That summer, the weather was kind, and they reached Archangel on August 31.

“Operation Dervish was dead simple,” Mr Alley recalls as he sifts through his boxes of memorabilia in the study of his Weymouth flat. “There were no rough seas or any action, and there was virtually 24 hours of daylight. The Germans didn’t wake up to what we were doing. We all thought that this was going to be easy.”
“But after Dervish, the Germans did wake up to what was happening. The Luftwaffe and U-boats moved  to northern Norway, so the convoys had to keep as far north as possible.”
{***}

Over the coming months, conditions grew increasingly grim. Convoys in winter sailed through almost complete darkness in temperatures so low that skin was flayed from bare fingers if they touched any part of the exterior of the ship – something that happened to  Mr Alley when he grabbed a ladder rail.

78 The number of convoys that made the grueling journey to Russia.

He recalls the high seas, with waves as high as cliffs, that would set the ships on great roller coasters. Waves landed on decks as solid ice, which had to be picked off at every spare moment, no matter the weather, as it was capable of capsizing a ship – and no one lasted long in the water. Four merchant ships sank purely through bad weather. Tales of fires, of terrible deaths and miraculous survivals were legion, some involving sailors as young as 14.

Even when there was no action, with hatches and portholes closed, life was far from cosy. “We were warm in our radar cabin, but the mess decks were terrible,” says Mr Alley. “From leaving Iceland to the Russian ports, we kept our hammocks up, and food and clothes were stacked in the hammock nettings under the mess table, in the officers’ cabins, even in the engine room. The mess decks smelled and they were awash with water filled with dried peas and flour and other things. And practically everybody on board smoked.”

Working in the radar room, Mr Alley didn’t actually see much action, though he could hear events on the radio. Most appalling was the fate of Convoy PQ17, the largest that had ever sailed. In July 1942, while HMS Inglefield was searching for the German battleship Tirpitz, PQ17 was ordered to scatter because of reports that German warships were being refuelled so they could intercept the convoy. Unprotected, the ships were picked off one by one in the worst setback of the campaign: 24 of 35 cargo ships were sunk. “We heard ships call for help and could do nothing about it,” Mr Alley recalls sadly. “We had our own job to get on with.”
In March 1943, after a year and a half of constant convoy work, HMS Inglefield was sent to the Mediterranean, where she was sunk by a German glider bomb off Anzio in Italy. Mr Alley was rescued, but 33 of his comrades died: their bodies remain in the hulk of the  heroic Arctic convoy ship, which still lies at the bottom of the Mediterranean.

Britain’s Arctic convoys, based in Iceland and at Loch Ewe in Scotland, continued their journeys until May 1945. A total of 78 convoys delivered more than four million tons of cargo, including 7,000 planes, 5,000 tanks and other vehicles, as well as medicine, fuel and raw materials. In all, 101 ships were sunk, and some 3,000 Merchant Navy and Royal Navy seamen were killed by explosions, fires and freezing water. The death toll among merchant ships was lower because their crews were far smaller. They were lightly armed and their guns were manned by the Royal Artillery. The RAF provided them with fighter pilots and planes that were catapulted from the decks, but with no way of returning.

“We hated to see a Royal Navy ship go down, because there would be so many on board,” says convoy veteran Jock Dempster, who managed to enlist in the Merchant Navy at the age of 16. Although he was young then, he says: “We appreciated the great dangers.”

Mr Dempster, who is now chairman of the Russian Convoy Association (Scotland), enjoyed his contact with Russians. “One time in Murmansk we gave away everything we had – we ended up without a stitch. We weren’t asked to, we just wanted to help.”

There is a continuing mutual feeling of gratitude, and a team of 11 specialists from St Petersburg recently came to London to repair the masts of HMS Belfast, the surviving Arctic convoy ship which is now part of the Imperial War Museum. The £250,000 project was a donation from the Russians in appreciation of the convoys, though Britain had benefited from them just as much as Russia.
{***}

There were no official ceremonies in England to mark the 70th anniversary of the first Arctic convoy, but in Scotland a dozen veterans celebrated the event with a service at the Loch Ewe memorial, organised by Mr Dempster and attended by Prince Michael of Kent and the Russian consul from Edinburgh. This was followed by a meal in the handsome Pool House Hotel at Poolewe, the former headquarters of the Loch Ewe naval base, where guest rooms are named after navy ships. In Aultbea, on the east side of the loch, a museum dedicated to the convoys is soon to be built by the village hall.

Year by year the number of Arctic convoy veterans decreases, from a height of 17,000 to around 200 today. Like many of his comrades, Mr Alley couldn’t attend the Loch Ewe memorial. Long retired from his career as an emergency planning officer, for which he was appointed OBE, he is in good spirits, but is recovering from a hip operation, making long journeys difficult. Plus, his wife Peggy, who was a Wren when they met during the war, has Parkinson’s disease.

Steeped in memories of his Arctic experiences, though, he is writing a book about them. Fewer Christmas cards are exchanged with the Russians he met, but he has warm memories of his visits, and maintains an interest in contemporary Russia. He can find information about the convoys on the internet, including videos of HMS Inglefield that have begun to appear on YouTube.

“The children and grandchildren of many of the veterans have become interested in what we did, and they’ve kept the memories going,” he says. “It’s gratifying to think that the Arctic convoys will still be talked about in the years to come.”