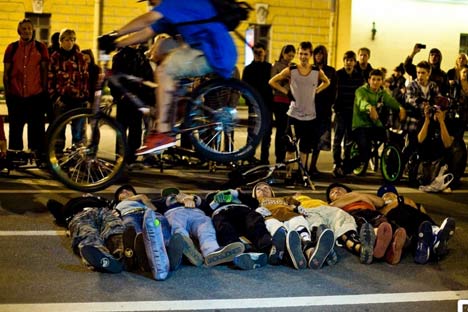 With the growth of street art festivals and laser paints that don't leave a mark, is graffiti becoming mainstream?

The story of Russian (or Soviet) graffiti started in the Baltic States in 1985, and went hand in hand with the beginning of the breakdancing craze – the first graffiti artists did all the decoration for hip-hop festivals. Street art only came to Moscow 10 years later. Strange as it may seem, one of the main reasons for the delay was the cost of the materials – in Kaliningrad a can of spray paint cost a fifth of what it did in Moscow. And it was also much easier to build up a relationship with the city administrations in the Baltic States than it was in the capital, where to this day the authorities cannot seem to decide what constitutes graffiti, art or vandalism. Today street art is increasingly attracting a following mostly thanks to street-art festivals that are taking place all over Russia, including the Meeting of Styles in St. Petersburg, and Snickers Urbania. Even with all this, there are no more than 20 people in Russia who are actually seriously engaged in graffiti, and for most people this is still just the next big thing, and fashions come and go.

Following the release of Banksy’s film “Exit Through the Gift Shop,” which was a massive hit, along with the Lacoste polo shirts painted by Honet sold in Europe and the United States, few can doubt that street art is the art of the future. An international art-forum, GraFFFest, was held in St. Petersburg from Aug. 14-20. The festival was dedicated to street and digital art, and one of the most up-and-coming trends in street art – video graffiti. Evan Roth, the American street artist who started this trend, is confident that “graffiti can be safe for city walls.” He is responsible for the Laser Tag System, which can be used to paint over walls without leaving a trace. In St. Petersburg, the artists took this a step further and projected onto the raised wing of Palace Bridge.

Roth called the experiment in St. Petersburg was his first legal video installation. It is symbolic that his “canvas” was the Palace Bridge – the location chosen by the Russian art group “Voina” for one of the most strident pieces of subversive art in recent years.

After the forum, Daria Gonzales spoke with forum organizer Svetlana Petrova for Russia Beyond the Headlines.

Russia Beyond the Headlines: St. Petersburg already hosts one international graffiti festival, the Meeting of Styles. Where did the idea for the GraFFFest come from? Do you think this city has room for two of these festivals?

Svetlana Petrova: Meeting of Styles is an international festival dedicated to painting on walls, classical graffiti, and the main theme of our art-forum is the synthesis of street and digital art, creating the art of the future. [This festival was actually the first of its kind in Europe].  In 2007-2008, I was in charge of the Multivision festival, and the project was called “Small movies for a big city.” We organized an outdoor screening of the festivals’ short animation films, which we projected onto the Palace Bridge. This inspired me to develop “public art” as a serious and genuine art form which the public can enjoy for free.  I like to talk about art in a crowd, it always gets a lively response from a modern audience.

RBTH: Evan Roth was at the GraFFFest, what did he make of it all?

S.P.: Evan Roth was very positive. He thinks that Russian street art has a big future and the most important thing is to encourage it. He gave a free master class on the new form of animation art - Animated gif mash-up. The results of the joint work of Evan and Russian artists are what we screened on the bridge. I like his work – he knows how to talk about art in the language of art.

RBTH: Will GraFFFest happen next year?

S.P.: I hope it will, seeing as there was a lot of public interest in it this year. The main thing is that we need money; you could go bankrupt buying the paints for graffiti. Graffiti has gradually started to get support from the powers that be. For next year it’s possible that we won’t just repeat the festival, but expand it. My idea was supported by the Municipal Committee on Culture, who seemed quite interested.

RBTH: Could we see this as an indication that the attitude towards graffiti in Russia has started to change?

S.P.: The fact that the forum had the support of the Committee for Culture still doesn’t mean that people’s opinion of this form of art as the art of simple “unenlightened” people has necessarily changed. This is something we are working on – for the forum the 16 artists who were invited to GraFFFest were happy to paint on a “legal” space – and this was the 120 metre fence of the Krasnoye Znamya (Red Banner) cultural center. Passers-by stop, take photos and generally take an interest.

RBTH: The GraFFFest festival, along with the “White Nights in Perm” and the “Battle of the three capitals” are all part of the avant-garde youth art-movement in Russia. The aim of this sounds simple – to give young people as many opportunities to express themselves as possible. Can we say that initiatives like this represent the future?

S.P.: Youth movements tend to gain momentum; this is a natural process. In the rest of the world the youth movement is much more vibrant. If it suddenly starts to die down in Russia this will be a reflection of the sickness of society, as young people are society’s most active group, and if we don’t give these people the opportunity to create, they will find other ways to express themselves. And this is something the state really doesn’t need.