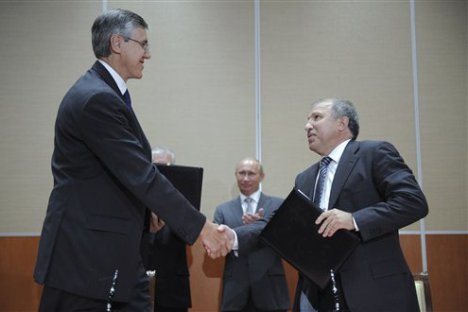 ExxonMobil replaced BP as state-owned Rosneft's partner of choice Tuesday when the presidents of the world's largest oil company and Russia's biggest producer announced a deal that Prime Minister Vladimir Putin said could generate up to $500 billion in investment.

The strategic agreement, signed in Sochi under the watchful eyes of Putin and Deputy Prime Minister Igor Sechin, stipulates that $3.2 billion will be spent on joint explorations in Russia's Arctic Kara Sea — the focus of the Rosneft-BP tie-up — and the Tuapse license block in the Black Sea.

In return for granting unprecedented access to Russia's hydrocarbon reserves, Rosneft will receive equity stakes in at least six ExxonMobil projects including tight oil in Texas and offshore in the Gulf of Mexico. ExxonMobil chief executive Rex Tillerson signed the deal in Sochi.

"New horizons are opening up," Putin said in remarks carried by Reuters. "One of the world's leading companies, ExxonMobil, is starting to work on Russia's strategic shelf."

Sechin, a former Rosneft chairman, described the agreement with ExxonMobil as "significantly better" for Rosneft than its failed BP deal.

Announcing the BP-Rosneft deal in January, Putin estimated that the 126,000-square-kilometer Arctic area that will now be jointly explored by ExxonMobil and Rosneft contains 36 billion barrels of crude. That is enough to fully meet global demand at current levels for about five months, and one-tenth of the 372 billion barrels contained in deposits below Russia's Arctic maritime territory.

The Tuapse block in the Black Sea covers an area of 11,200 square kilometers and is estimated to hold 9 billion barrels of oil reserves.

Rosneft's equity stake in the joint ventures will be 66.7 percent, while U.S.-based ExxonMobil, expected to shoulder the brunt of exploration costs, will hold the remaining 33.3 percent.

Rosneft has long been seeking a partner among international oil giants to help develop Russia's huge Arctic energy reserves and to propel the company, whose main assets came from the state-driven breakup of Yukos, onto the international stage.

ExxonMobil has cooperated with Rosneft on the Sakhalin-1 oil and gas project in Russia's Far East since 1996 and in January signed an agreement about cooperation in the Black Sea.

"This venture comes as a result of many years of cooperation with ExxonMobil and brings Rosneft into large-scale world-class projects, turning the company into a global energy leader," said Rosneft president Eduard Khudainatov in a statement released on ExxonMobil's web site.

Rosneft is also seeking deep sea drilling experience, and Putin mentioned ExxonMobil's offshore work in Canadian waters as one attraction of the company.

In a stipulation identical to the deal signed by Rosneft and BP, the two companies also agreed to create a Arctic research and design center in St. Petersburg that will support and develop technology to aid exploration and drilling in Russia's icy northern seas. In addition, the oil giants pledged to conduct a joint study of oil resources in western Siberia.

Putin did not specify exactly where the $500 billion in investment that the deal is expected to generate will come from. But he said it was "scary" to utter such a huge figure, Bloomberg reported.

In an indication of how desirable access to Arctic hydrocarbons is for international oil companies faced with dwindling reserves in easily accessible locations, it took Rosneft just 3 1/2 months to construct the deal with ExxonMobil after the collapse of its tie-up with BP.

Unlike with BP, Rosneft did not reach an equity swap with ExxonMobil. If the deal with BP had gone through, Rosneft would have received a 5 percent stake in the British-based oil major and BP would have gained 9.4 percent of Rosneft.

"The biggest loser [in the ExxonMobil-Rosneft agreement] is BP," said Artyom Konchin, an oil and gas analyst at UniCredit Securities. "The noise around the [BP-Rosneft] transaction will go on for a long time. … But to resurrect that deal is [now] next to impossible."

The deal with Rosneft was part of BP chief executive Bob Dudley's strategy to rebuild the company after the 2010 oil spill in the Gulf of Mexico.

Vladimir Buyanov, a Moscow-based BP spokesman, told The Moscow Times that he wished Rosneft well. "I can only express my regrets that our deal was not preserved," he said.

But it is not just BP that has failed to conclude lasting relationships with Russian oil and gas companies, where shifts in long-term political and economic prospects can derail once-promising partnerships.Conoco Phillips exited from a deal with LUKoil in 2010, and Shell was forced to relinquish control of the Sakhalin-2 project to Gazprom in 2006.Chevron left a $1 billion exploration pact with Rosneft in June.

Originally published at The Moscow Times.