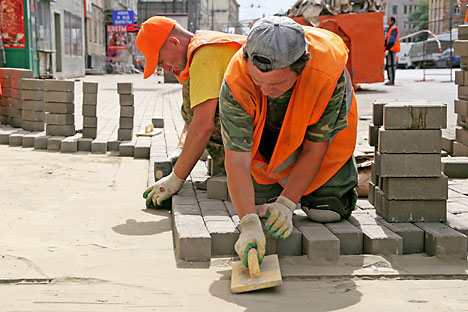 HRH, (my “Horrible Russian Husband”) has some friends who are high up in government circles, and then he has an even larger number who would like you to think they are. Gena V. falls into the latter group. He spends a lot of time trying to convince everyone that he is privy to all kinds of explosive insider information when, in actual fact, he works for the State Lottery. Conversation with Gena is always uphill work, since he is allergic to opposing views. The last time I tried was in 1999 when he flatly refused to even discuss the notion that an anchovy is a fish. After that, I gave up.

Gena’s latest conspiracy theory is that the mind-bogglingly inconvenient sidewalk renovation currently going on in Moscow is actually a clever anti-revolutionary measure by that cagy crowd in the Kremlin. “Last year they engineered the heat wave and the smoke,” Gena revealed, “so everyone left the city. This year, it’s the sidewalks being torn up. No one can move around the city, so no protests are possible. By the time they finish, it will be too cold for protest marches. No one revolts during cold weather.”

“With the possible exception of the Bolsheviks in February and October of 1917,” I quipped. HRH and Gena ignored me.

“What worries me,” said HRH, “is that those bricks they are using for the new sidewalks are the perfect weapon for the proletariat, should they ever decide to rise up.”

If, or indeed, when Russia’s next revolution comes, it will most likely be nicknamed “The Curb Revolution,” because the origins of discontent might well be traced back to the sidewalk debacle that has Muscovites well and truly pissed off.

One upside of the renovation is that this has been a great summer to start the Dukan Diet – the new no-carbs miracle diet that helped Kate Middleton slim down before her April nuptials. Why? Because for most of the summer, it has been physically impossible to get to my favorite bread shop, thanks to the simultaneous carving up of over 4 million cubic meters of Moscow sidewalks ordered by the capital’s new mayor, Sergei Sobyanin. Overnight, the existing asphalt sidewalks were hacked to pieces, and Moscow suddenly looked even more like Poland in the early hours of September 1, 1939 than it already had. Swarms of dusky guest workers up from the south started to lay the (really ugly) brick tiles slated to replace the hacked-to-pieces asphalt, getting into heated arguments with beefy security guards over access to the entrances they guard. It’s never been easy to be a pedestrian in Moscow, but this summer, it’s been impossible. To score a simple baguette or pastry, I’ve had to pick my way through a narrow path perilously close to the traffic whizzing by on the Garden Ring, and then negotiate a rickety wooden plank, placed precariously over two hunks of old asphalt to reach the bakery door.

Like the Dukan Diet, the sidewalk controversy has a lot of meat on it. Sobyanin, a rank outsider, hails from Khanti Mansi, and spent most of his career on the wrong side of the Urals, so when he became Mayor of Moscow it was like appointing Clint Bundtson from Lake Woebegone, MI to be the mayor of New Orleans. Since the mayor of Moscow is Presidential appointment rather than elected position, Sobyanin has no legal or political responsibility to seek the opinion of Moscow’s 15 million citizens as to how they feel $145.4 million dollars from the city’s coffers should be spent. Sobyanin, who until the sidewalk thing got going, was best known for cancelling gay pride events and registering his shock and the amount of “Non Parisian skin colors” on a visit to France, clearly did not waste any valuable time or energy finding out.

When Muscovites learned that Sobyanin’s wife Irina, known as “Ira Bardura” or “Ira the Curber” owns a successful sidewalk tile/brick and curbing company, and that during Sobyanin’s tenure as governor of Tyumen Region, all of the sidewalks in Tyumen got a tiled facelift, you could almost hear the collective groans as heads were shaken from Khimki to Southern Butova. Though there was no direct evidence to link the Moscow tiles with Mrs. Sobyanin’s company, the memory of former mayor Yuri Luzhkov’s construction mogul wife, Elena Baturina was on the mind of everyone. Nikolai Klimeniuk, writing in “Snob” put it succinctly: “I don’t want to hear that those tiles are all because of the mayor’s wife. We’ve already had one married mayor.” Tales of Ira Bardura began to fly around Moscow, including the wild rumor that the curbs of Tyumen were all lined in solid marble.

Three days later, Gena had a new different explanation, which I wasn’t sure he understood was actually a popular joke around town (which Tolya our driver had recounted to me that afternoon): “Luzhkov told Sobyanin that the streets of Moscow are paved with gold,” Gena confided conspiratorially. “So Sobyanin is looking for it.”