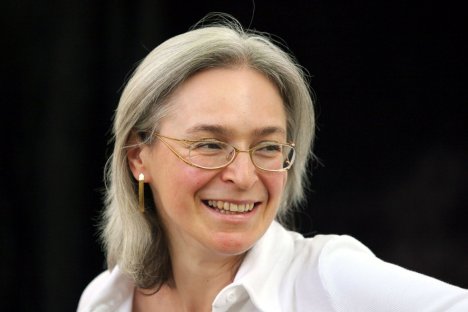 A retired police chief has been accused of organising the murder of journalist Anna Politkovskaya. But whoever ordered the killing is still at large.

Five years after the murder of the campaigning journalist Anna Politkovskaya, who investigated human rights violations in Chechnya, police have arrested a man suspected of organising the  killing. Lt Col Dmitry Pavlyuchenkov, was then chief of a secret Moscow police unit, one of whose functions was outdoor surveillance.

The Russian Investigative Committee (SKR) has established that “Pavlyuchenkov was commissioned to organise the killing of Politkovskaya for a fee, and he set up a criminal group [for this purpose]”, said SKR spokesman, Vladimir Markin.

The police chief, who has since retired, was a witness in the case and allegedly tried to mislead the investigation concerning his invovement in Politkovskaya’s murder,  according to the murdered journalist’s newspaper   Novaya Gazeta .

Mr Markin said that Pavlyuchenkov was suspected of organising surveillance of the journalist. “[He] acquired the weapon, worked out the plan and determined the role of each of the accomplices in preparing and carrying out the murder.”

Investigators suspected four Makhmudov brothers from Chechnya of involvement in the murder. Dzhabrail and Ibragim were charged but acquitted in February 2009, along with a retired police officer, Sergei Khadzhikurbanov, who was accused of supplying the murder weapon. However, the verdicts were overturned by the Supreme Court, which ordered a retrial. Charged in absentia, Rustam Makhmudov, who was suspected of firing the fatal shots, was arrested in Chechnya this year. Pavlyuchenkov, according to Mr Markin, had provided the brothers with information on Ms Politkovskaya’s movements. She was killed by four shots from a pistol on October 7, 2006, in the lift of the building where she lived on Lesnaya Street in Moscow.

Who commissioned the crime remains the key question. Some have blamed the Chechen leadership, which she targeted in her hard-hitting articles about people disappearing and being tortured in Chechnya.

Mr Markin said: “The investigation has information about the person suspected of commissioning the crime but deems it premature to disclose this information.”

The journalist’s colleagues at Novaya Gazeta are conducting their own investigation. Deputy editor-in chief Sergei Sokolov says the investigative committee’s announcement was “just one theory”, and that the newspaper “has its own theories”. “I think there was a chain of middlemen, and the key question is how long it was,” he told the ITAR-TASS news agency.