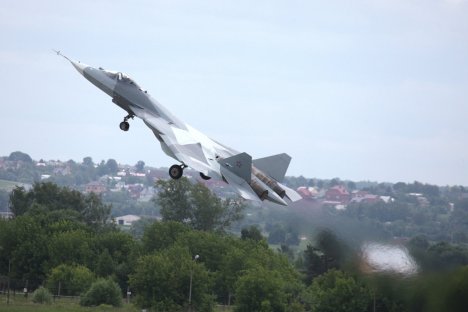 Contracts for more than $10bn were signed at the MAKS 2011 International air show held outside Moscow this month.

The unveiling of the fifth-generation stealth fighter jet  T-50 was the most eagerly anticipated attraction of the international MAKS 2011 airshow this month.

A prototype of the jet performed its inaugural public flight at the five-day show in the outskirts of Moscow. The display was repeated every day for the audiences, but on the final day, the T-50 suffered an engine problem and had to abort takeoff.

Experts point out that the T-50 is a rather crude prototype, and its engine is still in the development phase. When complete in 2015, the aircraft will take part in active service with the Russian and Indian air forces.

The contracts signed at the show for fixed-wing aircraft were worth a record $10bn (£6bn) but all were for civil aviation. Several deals between the Russian Army and the Russian state holding company OAK (which includes all aviation manufacturers in the country) were pushed back indefinitely because of pricing problems.

The lack of orders for military aircraft was disappointing for many, but OAK tried to smooth things over by promising that Russia will have at least a quarter of the world market in cargo aircraft by 2025. Of the civilian aircraft at the show, the new Irkut MS-21 accounted for $6bn of the contracts signed with a total of 78 sold. Russia’s answer to the Airbus A320, though, still exists only on paper. Its first test flight is scheduled for 2014, with mass production beginning in 2016.

The Sukhoi SuperJet 100, a regional aircraft, received only 22 orders – 12 from an Indonesian company, and 10 from the Russian company Gazpromavia. Two of the jets are flying for commercial airlines. Still, no European company has shown interest in the 100-seat plane that must compete with Brazil’s  Embraer and the Canadian company Bombardier.

Aerospace companies are hesitant to use an aircraft that has had operating problems and is still being  produced at very low volumes – just one aircraft a month. Certification from the European Aviation Safety Agency, due before the end of 2011, and the successful resolution of operating problems should help interest  European buyers.

Russian Helicopters (Vertolety Rossyi) stood out from the rest, and signed deals for 79 civilian aircraft (Mi-8AMT and Mi-171), as well as 450 aircraft for the military. The firm’s head, Dmitri Petrov, proudly noted that the French Mistral assault ship would probably be equipped with Ka-28 (anti-submarine) and Ka-52 Alligators (attack) helicopters, made by the company. Mr Petrov also told Russia Now that two helicopters produced by the firm had a good chance of success on the European market.

“Spain and Portugal have  already purchased about 20 of our Ka-32A11BC fire-fighting aircraft. This helicopter is equipped with unique horizontal water cannons that can put out fires in skyscrapers,” he said.