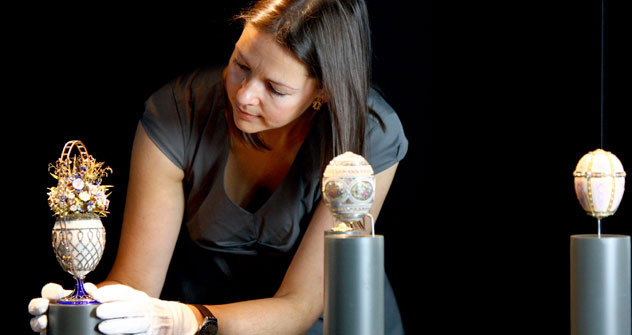 Royal-watchers in London can find much belonging to the House of Romanov.

From July to October each year, Buckingham Palace officially opens its doors to the public. This year, advance ticket sales more than doubled in the wake of the royal wedding of Prince William and Catherine Middleton. The wedding dress, standing empty in the middle of the ballroom, looks less impressive without Kate Middleton inside it, but the royal collection of Faberge, exhibited off the East Gallery, is full of intriguing details.

Queen Victoria’s silver-gilt notebook, a present from Tsar Nicholas II, is signed by all the European kings and queens who came to the Buckingham Palace for the Diamond Jubilee in 1897. From then on, British royals (especially Queen Alexandra) amassed a fine collection of miniature tea sets, clockwork elephants, platinum-whiskered mice, quartz pelicans or diamond-studded eggs. There are also highly decorated examples of the traditional Russian drinking vessel known as a kovsh, including one with an enamelled copy of a painting by Ilya Repin of some Cossacks.

An artwork by the great Russian jeweler Peter Carl Faberge became the perfect inter-dynastic gift for the monarch who has everything, underlining the close ties between the Windsors and the Romanovs. There are some delightful royal photos illustrating these connections, including an 1896 glimpse of Queen Victoria and the future Edward VII with the Russian Imperial family at Balmoral. Victoria is frowning, typically unamused, in the direction of nine-month-old, Olga, oldest daughter of Tsar Nicholas II.

On the tour through Buckingham Palace, visitors pass historic halls like the Bow Room, where foreign diplomats are presented to the monarch, and the state dining room. Ivan Maisky, Soviet ambassador to London in the 1930s and early 1940s, records in his fascinating diaries the shock when Joachim von Ribbentrop greeted George VI here with a Nazi salute instead of a bow. In a later entry he describes a state banquet where “we ate from gold plates with gold knives and forks” and “the dinner, unlike most English dinners, was tasty.”

Buckingham Palace is only one of many London venues where you can explore royal Russian connections or admire imperial bling, which is just as well since entry tickets are nearly twenty pounds and selling out fast; a trip to the (free) Victoria and Albert Museum of Design makes an ideal, budget alternative. From the gleaming blue and gold plates of the “Kremlin Service” to silver vodka cups and heraldic snuff boxes, this huge museum is a storehouse of Russian treasures. The jewelery is particularly elegant. Faberge is represented, of course, as well as a ruby-studded bouquet from the Russian imperial collection, sold off after 1917 by the Bolsheviks. They flogged Catherine the Great’s dress ornaments as well: numerous silver leaves covered with brilliant-cut diamonds. Such exchanges go both ways; the V and A also has a copy of a silver leopard, which Charles I sold to Tsar Mikhail in 1627 (the original is still in the Kremlin).

Another place where you can admire antique Russian jewelery for free is the historic Wartski store, these days located near Berkley Square (where the nightingale sang). They are planning a special exhibition of Faberge next year in May to celebrate the Queen’s diamond jubilee. A signed photo of Nicholas II on top of the safe reinforces the royal connections. There are imperial chairs, upholstered in yellow, and cases full of smoked crystal or jade, with price tags that would buy a small house.

Several of London’s finest houses served as refuges, party venues or hotels for royal Russians over the years. A party for Nicholas I at Chiswick House in 1844 involved guests being ferried over the lake to admire four live giraffes brought in for the occasion. One of the giraffes decided to wade over towards the party instead and “join the company.”  The future Alexander III and his family also stayed there on their summer trip to England in 1873.

Frances Dimond, who suggested several of the landmarks mentioned here, was a former curator of the Royal Photograph Collection. She has a particular interest in stories like these, exemplifying “the links that there have been for centuries between Britain and Russia, going on quietly even when officially the governments were at war - Crimea or the Cold War.”  For Dimond it makes London a more interesting city: “I like the idea that London was a meeting place for these people … it is fascinating to imagine them here, moving about among familiar places.”

Grand Duke Michael and his family moved into Kenwood House, on a beautiful slope of Hampstead Heath, in 1909.  Despite the great location, he was unhappy in his exile from Russia and his unsuccessful attempts to gain a British title for his morganatic wife. George V wrote to Nicholas II complaining about “that good fool Michael” and told him regretfully “I have not the power to grant a title in England to a foreign subject and still more impossible in the case of a Russian Grand Duke.”

Clarence House, where Prince Charles lives, was home to a Prince Alfred in the late 19th century. His wife, Grand Duchess Maria, daughter of Alexander II, once had a Russian chapel built there. There was also a Russian chapel, which still survives, inside number 31 Welbeck Street, home to several upmarket offices. With its dome, paintings and Cyrillic inscription, it makes a beautifully incongruous setting for hi-tech business meetings and conferences. George V attended a memorial service there for Nicholas II in 1918.

Another royal Russian killed by the Bolsheviks and commemorated in London is Grand Duchess Elisabeth, a granddaughter of Queen Victoria. When her husband was assassinated in 1905, she founded a religious house in Moscow, with, as Dimond describes it, “nuns from all walks of life, who cared for the poor and sick.” In 1918 the murdered Elisabeth was thrown down a mine shaft; the white army later found her body and buried her in Jerusalem. This untimely demise qualifies Elizabeth to join the row of modern martyrs above the door of Westminster Abbey. The convoluted interconnections between the royal dynasties mean that Prince Philip, Duke of Edinburgh, is walking under a statue of his great-aunt when he visits the abbey.  The statues are supposed to represent “all those who died (and continue to die) in circumstances of oppression and persecution.”

A more cheerful legendary Russian woman recently appeared on London’sstreets; the mythical Mari Vanna traditionally welcomed the diners of Petersburg. The restaurant chain named after her, which also has branches in Moscow and New York, arrived in Knightsbridge this summer. The next feature in this series on Russian London will explore the city’s fast-expanding Russian restaurant scene.