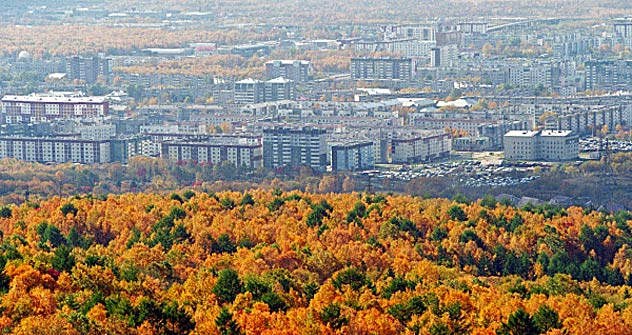 Most Indians know Sakhalin island by the ONGC oil and gas project Sakhalin I. But this beautiful island has much more to offer: it blend beauties of nature, tradition and modernity with ease. It also has two Indian restaurants to tickle the Indian palate.

With unspoilt nature, a unique history and a multi-ethnic population, Sakalin, the Russian Far Eastern island, has a lot more to offer than just oil and gas.

Sakhalin is synonymous in India with an oil and gas project, where the ONGC has a 20 percent stake. But not many know about the beautiful island that has been transformed by an economic boom and also boasts of two Indian restaurants.

The island, which stretches 948 kilometres from north to south, shot into prominence largely due to the discovery of oil and natural gas in the late-1990s.

Top players in the energy arena set up shop on the island in the new century, including ExxonMobil, Shell, BP and several Japanese majors. This transformed the island from what some in Moscow (a 9-hour flight away) called ‘a rock between some oil and fish’ or worse, a ‘Katorga’ (the Russian word for penal entrenchment colony), to a modern and international hub with some of the best infrastructure in the region.

While the island has turned into a magnet for business, the real charm of the island lies in its spectacular nature, which includes a sparkling coastline, untouched forests, towering mountains and volcanoes in the nearby Kuril Islands.

Besides an expansive coastline, Sakhalin has 16,000 lakes, including the Tunnaicha Lake, which is about 30 kilometres away from Yuzhno-Sakhalinsk, the capital of the region. Tunnaicha, which is surrounded by mountains and is a stone’s throw away from the Sea of Okhotsk, is a spectacle especially in the winter, when the top layer of the lake freezes over. Of course, this phenomenon is not just restricted to Tunnaicha, with ice-fishing on lakes and the sea being a favourite pastime in Sakhalin, where temperatures drop to -40 Celsius in the winter.

The southern part of the island has several lakes and lagoons that are popular with fishermen including Busse, a lagoon known for its delicious scallops. Busse is a one-hour drive from the world’s largest gas-liquefying plant, which is operated by Gazprom. After the snow melts in late-April, the series of lakes in southern Sakhalin known as the Tyoplie Ozyora (warm lakes), are a great place to camp out and swim.

Adventure-seekers should however head to the north of the island, which has some of Sakhalin’s 10 high altitude lakes. The Mohovoe Lake on Mount Spamberg is probably one of the most isolated large lakes in Asia. It takes a good three days to trek up to the lake, which has enough diverse species of fish to be an aquarium. A red-dotted fish locally known as Malma is difficult to catch, but according to many lucky fishermen, tastes much better than any of the salmon species that come to Sakhalin’s rivers every year for spawning. For those who want to experience the beauty of Spamberg and don’t have it in them to trek three days to get there, there is a helicopter service.

Sakhalin is famous for its seafood, and in the summer, fishing enthusiasts try their hand at catching the Cherry Salmon and North Pacific Salmon that return on their journey of death to the island’s rivers. The Tambovka River on the southeast of the island is an ideal place to watch the salmon return in droves. A weekend by the river is also a great place to soak in the maritime Russian culture. Most places in central Russia are devoid of the sea and a different folk culture has blossomed in the Far East. There have been several stories of large brown bears attacking campers, but that’s only likely to happen in the early spring months, when hungry Sakhalin Brown Bears wake up from hibernation.

It’s a stereotype in Moscow that bears roam the streets of Yuzhno-Sakhalinsk but besides a couple of stories in local newspapers about bears walking on the runway of the airport, the city hasn’t seen any bears except in its zoo. Yuzhno-Sakhalinsk is a city that has been rapidly modernised but thankfully not Pepsified with a McDonalds in every corner. There are two Indian restaurants, Taj Mahal and Bombay-1, both started by enterprising Indian businessmen and they are a huge hit among the locals. In fact, they are even popular for wedding lunches. There is a tiny but visible Indian community on the island, most of them being technical staff with the oil companies.

During the days of the Soviet Union, the island was strictly off-limits to foreigners and special permissions were required for Soviet citizens to visit. Yet, the sight of a person with non-Slavic features wouldn’t shock a local, like it would in other parts of the region. This is primarily because the island has a Korean minority. The Koreans were brought in as bonded labourers to Sakhalin by the Japanese, who occupied the southern half of the island. When Soviet troops liberated southern Sakhalin in 1945, the Koreans were stranded on the island. A majority of them took up Russian citizenship and are fully integrated into the society. Indians, who often complain about ‘bland’ food, will be more than happy to enjoy the spicy Korean food, which is an integral part of Sakhalin cuisine.

The island also has a small population of indigenous people, who are divided into a few tribes, each with a unique culture and language. Paternalistic protection to the tribes from the USSR gave way to an indifference to their culture in the mid-1990s, but a highly successful programme launched by Shell helped revive interest in their culture and settlements. Who says that the oil companies are capable of no good?

Multi-culturalism has historically been a hallmark of Yuzhno-Sakhalinsk. The city, which was called Toyohara during the Japanese occupation, has a small collection of Russo-Japanese architecture. The former residence of the administrator of Toyohara is a rare example of this fusion in architectural styles.  A Japanese diplomat once told this author that while the building would look like a Japanese palace to the outsider, the European elements in the structure are all too visible and that Japan has no building of the kind. Japanese structures are scattered around several areas in the southern part of the island. While Russia and Japan have not signed a World War II peace treaty yet, relations between the countries are cordial and there is a wonderful ferry service connecting Korsakov in southern Sakhalin to Wakannai on the Japanese island of Hokkaido.

With growing commercial interests, Sakhalin is connected to Japan, South Korea and China through direct flights. While there are several flights from the island to the Russian mainland, a true adventure seeker should take a 12 to 20-hour ferry ride to the mainland and traverse the great railway lines of Russia, including the Baikal-Amur line and the Trans-Siberian.