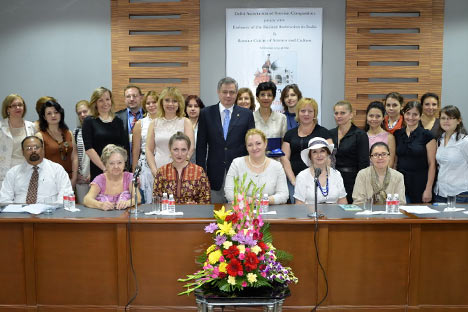 There was unanimity in ensuring unity of Russian compatriots across India bringing them under one roof.

An important highlight of deliberation of the meeting was the election of the All-India Coordination Council of Russian Compatriots, at which Ms. Elena Barman was unanimously elected as the Chairperson. Ms. Natalya Chenyaeva, Ms. Larisa Mukherjee and Ms. Tatyana Barisova, were elected as members of the Council representing Chennai, Kolkata and Mumbai, respectively.

Speakers representing different states assessed the situation and well-being of Russian compatriots in their respective states. The meeting in general discussed the programmes scheduled for the next year, and decided to hold the next meeting of the Coordination Council in February 2012. It was resolved to hold the All-India Conference of Russian Compatriots in August next year.

There was an overall consensus on enhancing the level of knowledge in Russian language among the children of Russian compatriots. Emphasis was also made on spreading Russian culture and tradition reaching out to broader masses through variety of programmes being organized in educational and other institutions. There was unanimity in ensuring unity of Russian compatriots across the country bringing them under one roof.

In recognition to the 53-year-old harmonious marital living in India, the Russian Medal “Love and Faith” was presented to the Indo-Russian couple Mr. Madhukar Pohray and Mrs. Maya Pohray, and on whose behalf their daughter Mrs. Rita Bhalla, a staffer of RCSC, New Delhi, received the same.