Clearing the way for cars, tanks, planes... and caviar 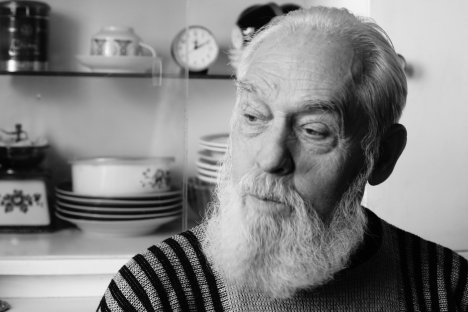 Poignant memories: Alexander Kurganov joined the crew of the Lenin icebreaker in 1944. Photo by Vladimir Ruvinsky

Veteran Alexander Kurganov tells of the dangers of life at sea and remembers fondly the foreign allies he met as his ship led the convoys.

Alexander Kurganov is showing a photograph of a group of elderly people dressed in naval jackets: “This is a captain – he sailed for a long time. He was a good fellow, now dead. This one sailed with different ships and could tell many stories. He’s dead, too.” Then, as if it had just occurred to him, he says with some dismay: “Of all of them, only five of us are still alive.”

Now 83, Mr Kurganov lives in a flat in Murmansk, in the extreme north west of Russia within the Arctic Circle. He became an assistant engine driver for the Lenin steam icebreaker in 1944, aged 15. The vessel cut a path through the ice for transport convoys travelling on the hazardous route across the White Sea to Archangel. Weapons, ammunition and food supplies transported on the ships by Russia’s allies saved many lives and helped win the war.

It was a chance meeting that led to Mr Kurganov’s recruitment. “There were seven of us kids, and we lived with our mother in a village near Rostov. One day, a naval officer from Archangel came to our village on a business trip. He suggested that I should become a sailor,” says the veteran. At that time, only children, the elderly and women were left in the village – all the men were at war. Those who stayed behind ploughed the land, harvested crops and dug anti-tank ditches – six metres deep and nine metres wide. Mr Kurganov was a tractor driver and very good at handling equipment, which attracted the officer’s attention. There was a shortage of crew for convoys, as professional sailors were at the front. Consequently, teenagers were often recruited to work on the ships.

After some brief training at a school for young sailors in Archangel, Mr Kurganov was selected to work on the icebreaker. Soviet Russia had obtained the ship from England: the vessel was built in 1917 in Newcastle. “The military valued this icebreaker and tried not to put it at risk. It was only 7,000 tons, allowing it to sail in shallow water, which came in very handy when we were taking transport ships to Archangel. The steamer did a good job then,” the veteran recalls.

If any of the crew fell overboard, the ship was not allowed to stop. He could only be picked up by the next vessel, and only if he was in its path. If not, the man was doomed to die.

Mr Kurganov recalls a traumatic incident when the icebreaker led a transport steamer from the ice into open waters: “After three farewell horn blasts, we returned to the ice where German submarines could not reach us. Suddenly, just half an hour later, the transport ship sent an SOS signal – it had been torpedoed by a submarine. There were people dying, but we couldn’t go and rescue them since we had orders to retreat into the ice as far as possible. Everyone on that ship died.”

The icebreaker accompanied warships as well as transport ships through the ice. The convoy operations were coordinated by a special team of American and British signallers, radio operators and pilots – about 15 people in all, according to Mr Kurganov. “We worked, ate and went onshore together. And what’s interesting is that almost all of them spoke Russian. The radio operators were actually fluent, since they needed to be for their work. Of course, the foreigners dressed better than us. If we went out dancing or to a club, we were all in pea coats and simple flannel uniforms, while they wore denim jackets and coffee-coloured trousers. They had money, too.”

The Germans attacked the convoys from their bases in nearby occupied Norway, but the there were fewer raids by mid-1944. “Towards the end of the war, German pilots took fewer risks: they would drop their bombs 100-200 metres away from us and then fly home,” Mr Kurganov recalls. He says that German planes were afraid to get close to civilian ships as  even they had proper weapons on board: “We had three American-made anti-aircraft machine guns – two by the stern and one at the bow of the ship.”

The transport ships led by the Lenin icebreaker carried planes, tanks, cars – such as American Dodges and Studebakers – tractors and locomotives. They also brought food, such as canned meat, and tobacco. “We even had caviar,” says Mr Kurganov. In Archangel, all the sailors received cigarettes with their rations: “We boys traded our cigarettes with the adult sailors for condensed milk.”

He says the allies were generous with food, which was then transported inland by rail, saving many lives. “At that time, the British and the Americans were a great help,” the veteran adds.

In return, the Soviet Union supplied their allies with timber, ores and apatites (phosphate minerals).
Deliveries from the United States and Britain along the Arctic convoy routes continued even after the Second World War had ended, right up until 1946. Mr Kurganov’s icebreaker was in service until 1953, and he remained in the north of Russia sailing with icebreakers and various other ships until his  retirement.

Several years ago, at a meeting of veterans, Mr Kurganov met a British man who had been on a warship that had sailed with the convoys. He was very happy to meet Mr Kurganov, saying: “Oh, I remember your icebreaker, it cut the way for us.”

Another anniversary meeting of convoy crews was organised this year in Archangel, also attended by British and Americans. But Mr Kurganov decided not to go. “My health isn’t so good now. Here, I have my doctors who know my illnesses and can always help,” he says. His health is also the reason he has stayed in Murmansk, as his doctors recommend a cold climate for him.

In his 83 years, this man has seen war, the heyday and  collapse of the USSR, and the rise and fall of the navy – his life’s work. He has survived a stroke and a heart attack, but you wouldn’t know it from looking at him. He has a calm, clear mind and a good memory. At home, he wears a warm sweater: it is cold but there is no heating in summertime. Over coffee and sandwiches in his small kitchen, the pensioner says he is quite happy – he still has his wife, with whom he’s lived for several decades, and his two sons, as well as his grandchildren.

There is something in the appearance of this retired sailor that evokes Moses, as he is usually depicted. “I have done my job, and now I would like to pass away without much suffering, quickly and painlessly,” he says calmly, as if speaking of something he cannot quite settle with God. He has, after all, taken care of everything else.