Illegal taxis soon to be gone from Moscow streets 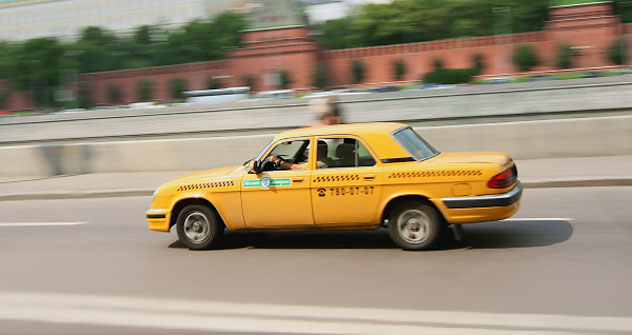 A new law intended to regulate the taxi industry goes into effect Sept. 1, but few believe it will have its intended effect.

On Sept. 1, the streets of Moscow will be cleared of “gypsy cabs” – at least according to a new law that enters into effect on that day.  Since it was announced, the new law has been the source of frequent, heated debate. Taxi drivers staged protest rallies in major cities and official petitions were submitted to the prime minister.

The law itself does not appear on first glance to be particularly onerous. It requires private taxi drivers to have a permit, and for their cars to be equipped with a meter, an orange light on the roof, and checkerboard stripes painted on the side. The cars will also have to undergo an inspection every six months, and each region has the right to require all taxis to be painted the same color.

The driver must have at least 5 years’ driving experience and must fill out a receipt or a report form for each journey.

Under the new law, taxis will be regulated by traffic police inspectors (GIBDD) and Rostransnadzor, Russia's transport safety regulator. They will attempt to catch unofficial taxis by posing as a passenger and filming the transaction.

There are currently more than 40,000 unofficial taxi drivers in Moscow alone, according to the Moscow Transport Union, an association of Moscow transport companies. These illegal taxis are estimated to earn more than 1 billion rubles in tax-free income annually. In contrast, there are only around 9,000 official taxis in the capital.

Not surprisingly, Moscow’s official taxi companies are strong supporters of the law. “The anarchy caused by private cabs operated by people with no driving experience and no knowledge of the Russian language or the city will come to an end,” said Felix Margarian, general director of the New Transportation Company, which operates taxis under the Yellow Taxi brand. “The illegals who have occupied the approaches to air terminals, train stations and parking places near retail complexes will either gradually legalize their activities or leave the market. I am sure there will be no deficit.”

But the law’s critics argue that it ignores the interests of individual entrepreneurs. “The list of requirements and documents to be submitted by carriers is still to be approved. Putting checkers on the side of the car and a lamp does not cost much. But a taximeter is a different story. Some say the device can be bought for 1,500 rubles, others say you can just install a program on the navigator. If color restrictions are introduced, thousands of carriers will have to repaint their cars. That is expensive,” said Yaroslav Scherbinin, Chairman of the Russian Union of Taxi Drivers.

According to private taxi drivers, the main problem with the new law is that licenses will be issued only to those who own their own cars. Drivers who use cars under a power of attorney will not be allowed. Additionally, it is not clear what the medical check up for drivers and the vehicle safety inspections will entail, nor where these tests will take place and who will administer them.

Almost all unofficial taxi drivers think the new law will be ineffective.

Alexei Krikunov, who has 20 years’ experience as a gypsy cab driver and has no plans to go legal, says it is impossible to catch an unofficial cab.

“I often take passengers who are going my way,” Krikunov said. “If a traffic cop stops me I can always say I am driving a relative.”

That tactic would probably work for Darya Boldyreva.

“I use taxis to get from my home to the office. There are always a couple of cars parked at the same place. I know the drivers well,” she said.

Even passengers that take taxis infrequently do not think that increased regulation will cut down on illegal fares.

“Half the cars that stop to pick up illegal passengers now are legal cabs,” said Anton Zaborov. “The driver is working for this or that company getting orders from the call center, but he still is tempted to get some more 300 rubles by taking an undocumented passenger. I cannot imagine how new laws will change that.”

Nevertheless, Stanislav Krivosheyev, leader of the All-Russia Movement of Taxi Drivers and Editor-in-Chief of the web portal Taxist News, has decided to go legit.

Soon this sign will stop nothing but a completely legal taxi. Source: Reuters / Vostock Photo

“Getting a license in Moscow took less than 20 minutes, the car was not inspected, I simply produced the papers,” he said. “I chose a taximeter, a certified software utility, and installed it on the navigator. All the procedures took a month and a half and cost me 10,000 rubles. I went about this business purposefully and thoroughly. But I think most taxi drivers will find it easier to go on working illegally.”

This scenario is especially likely for the many gypsy cab drivers who are illegal migrants.

“Those guys are already illegal – their cars usually have no technical certificate, drivers are illegal migrants – so it’s absurd to think that someone will be frightened to become even more illegal than he or she is now,” said Zaborov. “Imposing uniform regulations for each player in the market is always good; this make business more transparent. But it doesn’t change anything in the way illegals do their business.”

The law may have a side effect of improving Moscow’ image as a business and tourism destination. Some foreigners in Russia have found the lack of official taxis in the city to be a problem. Businessmen used to New York or London expect the center of Moscow to be full of legal, easily identifiable taxis. Tourists, many of whom do not speak or read Russian and feel intimidated by the metro, are often limited in their ability to sight-see by the lack of transportation options.

But some foreigners have found taking gypsy cabs to be an adventure. Tamara Smith, an American who has lived in Moscow for seven years, said that she began using illegal taxis out of necessity, despite her initial misgivings. Overall, she has enjoyed the experience.

“We have met many interesting people who pick up passengers to make ends meet—surgeons, scientists, and even the choreographer for the trapeze at the Moscow Circus! Riding with them has been a great way to get the inside scoop on how locals feel about current events,” Smith said. But she is not opposed to the reform. “Knowing Russian is an absolute must if one has to use gypsy cabs—so a system more like those of New York or London would be much more desirable and safer."