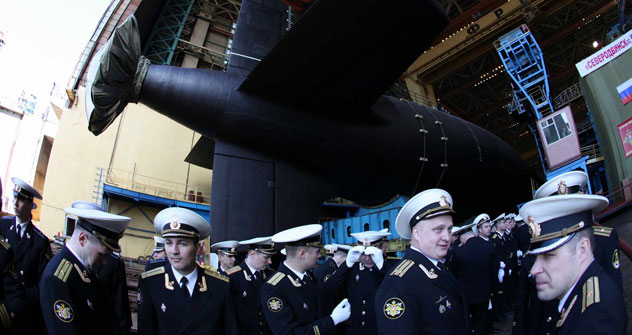 India and the Russian city of shipbuilders have established friendly relations.

A Memorandum of Cooperation between Severodvinsk and servicemen’s families from the Republic of India living in the city was signed on board Steamship ‘Gogol’. The ceremony was attended by India’s ambassador to Russia Ajai Malhotra.

Indian envoy to Russia started his first official visit to the Arkhangelsk Oblast with a trip to Severodvinsk, where he looked around the Sevmash shipyard and the Zvezdochka Ship Repair Centre. Mr. Malhotra spoke to the management of the Severodvinsk shipyard and Indian sailors from the observation group. According to the city administration, he was impressed with the standard, to which the naval vessels had been modernised. These included the heavy aircraft carrier Vikramaditya, which previously carried the name “Admiral Gorshkov”, and the fifth Sindhurakshak submarine.

In turn people in the Severodvinsk administration noted that this day, on which the Memorandum was signed, could certainly be seen as a significant one in the history of the town. After all, military-technical cooperation (MTC) is but one aspect of Russo-Indian collaboration in the Archangelsk Oblast. From the moment the first Indian submarine, with seven Indian submariners on board, arrived at Zvezdochka Ship Repair Centre in 1997, the seamen were immediately drawn into the life of the city, adding a new vibrancy to the community.

Whether it is City Day, MTC Day, Victory Day or a cultural event organised by the Sevmash and Zvezdochka shipyards, the Indians are willing and enthusiastic participants in any festivities. Last year the people of Severodvinsk were pleasantly surprised to see the Indians taking part in the Russian Ski Track skiing festival (“Lyzhnya Rossii”). The Russians, in turn, enjoy attending Indian Independence Day and other festivals organised by the Indian community.

Schoolchildren in Severodvinsk maintain an active correspondence with their Indian classmates, who went back to their homeland once repairs had finished on the ships, where their fathers worked. The city’s mayor, Mikhail Gmyrin, has warm memories of Mitili Rajdshekar, the daughter of an officer on the third Sindhughosh submarine, which underwent repairs in the Russian shipyard between 2004 and 2006. In less than three years the little girl not only got to grips with the Russian language, she also mastered ice-skating and skiing and learnt how to play the piano, to dance and to sing. Mitila won a lot of Russian competitions, not just in the city, but also at a regional level.

In general 40-45 small citizens of the Republic of India visit every year the Severodvinsk kindergarten and school. Today there are 18 Indian pupils studying at the Yagrinsk Humanitarian Gymnasium. At the moment they taking an intensive course in the Russian language, and at the start of the academic year they will embark on the study of other disciplines alongside Russian children. Another 27 Indian infants are attending kindergarten in Severodvinsk.

What is interesting is that the teachers who work with Indian kids have not had to undergo any special training, though, of course, the difference in culture and religion is something that cannot be ignored.  It is possible that at first some issues might have arisen, but the staff have always tried to take the requirements of the foreign students on board. For example, the schools had to make a special menu for children from vegetarian families.

Ajai Malhotra and his wife really liked the friendly and leafy city of Severodvinsk, where 8 Indian children were born in the last year alone. Since 1997 a total of 29 Indian babies have been brought into the world in the local maternity ward. “It is a joy for me to hear and be aware of the fact that these children will have Severodvinsk as the place of birth on their passports, this is yet more grounds for the development of our relationship”, said the Indian Ambassador.

The international families established on the basis of MTC form yet another link uniting India and Severodvinsk. A translator from the Sevmash MTC industry and an Indian translator, who was working as part of the observation group, fell in love and got married. Today they live in India. This is not the only Russian-Indian family which started here. A mechanic from the fourth Sinduvidzhai submarine found himself a Russian wife during his time in Severodvinsk and returned with her to his homeland, when he had finished work.

Ajai Malhotra thanked the city for its warm reception and for the good living conditions offered to the families of the Indian sailors. He emphasized that he was glad to hear about the proposal for the creation of an Indo-Russian cultural centre in Severodvinsk, in which it is planned that delegations will establish an exchange for the future development of friendly relations.

The Ambassador also liked the idea that Severodvinsk would be twinned with one of the cities in India. Mr. Malhotra said that it would most likely be with another maritime city with shipyards in operation.

As well as MTC, India and the Archangelsk Oblast are also united by the Indian students at the Archangelsk State Medical Academy. Every year there are between 200 and 400 citizens of India living in the city. So, in the Ambassador’s opinion, the signed Memorandum will give relations between the two nations a positive and very valuable new impetus.