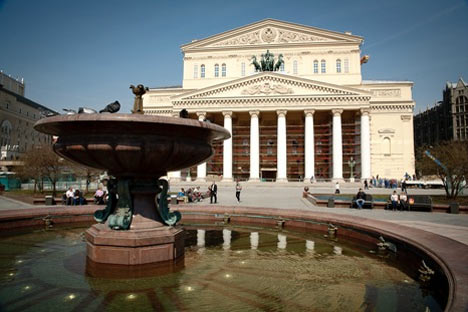 The renovated Bolshoi Theater will reopen its doors in the fall.

After six years of renovations that have been beset with allegations of corruption, infighting, delays and political point-scoring, the Bolshoi Theater’s main stage will open again to the public this autumn. Following a gala concert at the end of September that will likely be attended by both the cultural and political elite of the country, the more serious business of opera and ballet will begin on October 2, as one of the world’s most famous theaters finally gets its home back.

The first performance on the newly renovated stage will be of Mikhail Glinka’s “Ruslan and Lyudmila”, regarded as the first major Russian opera — so far, so predictable. Somewhat more surprising, perhaps, is the choice of director for the opera. Dmitry Tcherniakov offended traditionalists with his Bolshoi production of “Eugene Onegin” in 2006 so much that legendary soprano Galina Vishnevskaya vowed never to set foot inside the theater again.

Vishnevskaya’s tirade notwithstanding, Tcherniakov has become something of a “house director” for the Bolshoi, with “Ruslan and Lyudmila” set to be his fifth production at the theater. His “Onegin,” while controversial at home, so impressed international audiences that he is now one of the most in-demand opera directors going, and Russia Profile caught up with him in London during rehearsals for his production of “Simon Boccanegra” at the English National Opera, which opened in June to mostly positive reviews.

In the dynastic world of Russian classical music, Tcherniakov has an unusual biography. “I’m not from a musical family, and I came to love opera not through some kind of innate musicality, or through a love for vocals or a desire to be an actor. It was something else,” said Tcherniakov. Indeed, he remembers precisely the day on which he realized that he had found his calling. It was a day in late May, 1983, and the Mariinsky (then known as the Kirov) were in town, with a series of performances to mark 200 years since the establishment of the theater. “It wasn’t easy for ordinary people to get tickets to the Bolshoi at the time, but my mother, who worked in a military facility, had been given two tickets at work as a reward for winning some kind of prize, and so we went.”

For the 13-year-old Tcherniakov, it was an unforgettable experience. The two tickets were in different places, one in the stalls and one high up in the Gods, and at the interval he swapped with his mother. The opera, by a quirk of fate, was “Eugene Onegin,” which nearly a quarter of a century later he would return to the theater to direct. The Kirov’s staging was by Yuri Temirkanov, first seen in 1982 and still part of the theater’s repertoire today. “I got home and started to draw everything that I’d seen, I just became obsessed with it,” Tcherniakov recalls. “And then the new season started and I tried to go and see everything that I could, and began to get more interested in opera.”

However, the route back to the stage of the Bolshoi was not a straight one. Tcherniakov studied architecture, and even when he graduated and realized that his real love was working on the stage, he first became involved in dramatic theater, working at a number of theaters in Russia, and in the Lithuanian capital Vilnius, before trying his hand at his first opera, a contemporary work staged in Novosibirsk in the late 1990s. He realized that opera, after all, was his calling, and while he still directs drama, the majority of his work is now in opera.

His first staging at the Bolshoi was “The Rake’s Progress,” Igor Stravinsky’s masterpiece, which he put on in 2003 just after the opening of the theatre’s New Stage. It was the first time the Bolshoi had staged the work, and the first time the theater had put on an opera in English, and it garnered good reviews for the direction, if not for the English-language diction. As theatres in Europe got wind of the new young Russian director, from this production and from the three operas he had staged at the Mariinsky with Valery Gergiev, he began to be invited to opera houses in Europe, especially in Germany. Notable was a 2005 production of Modest Mussorgsky’s “Boris Godunov” in Berlin with Daniel Barenboim conducting.

Then came the fateful “Onegin” in 2006, which replaced Boris Pokrovsky’s legendary 1944 staging. Vishnevskaya said she had “cried in humiliation” in a letter to the Bolshoi’s management, and vowed never to set foot in the theatre again, cancelling an 80th birthday party due to be held at the theatre, and railing at the “completely deformed” main characters. The soprano, who was probably the theatre’s most famous Tatyana of all time, wrote of Tcherniakov’s “public desecration of our national treasure.”

It wasn’t the first time the Bolshoi had come under attack for updating its ways, with Kremlin-backed youth groups protesting the premier of Leonid Desyatnikov’s contemporary opera “The Children of Rosenthal,” premiered on the New Stage in 2005, claiming it was pornographic. Then, the Bolshoi management refused to back down, and again with “Eugene Onegin” the management sided with Tcherniakov, rather than with the prima donna from the past, scheduling an extra performance of the opera for the night of Vishnevskaya’s cancelled birthday bash. Tcherniakov also says he found no resistance from the cast, most of whom had taken part in the Pokrovsky production, which had run until the previous year, but who rehearsed his version “as if it were a new opera.”

“I didn’t take part in any of the arguments, and never went on television,” said Tcherniakov, remembering the furor five years later. “I sat quietly in the corner, and I knew I was right. It wasn’t some kind of reflex staging, I know every note in that work, and I spent a long time thinking about how to stage it. There was nothing there that didn’t fit and I could take responsibility for everything that happened there. I didn’t doubt myself, and it didn’t make me worry that I had got it wrong.” He bears no ill will toward Vishnevskaya, he says, and in a way is even pleased that the scandal attracted attention to opera and stimulated debate. “There is a sense of indifference to art and just to life in general in Russia, and here we had this difficult situation, and there were talk shows on television and newspaper discussions. The most important thing was that there wasn’t indifference, and I’m glad about that.”

The Personal and the Classic

Tchernaikov’s “Onegin,” for all that Vishnevskaya despised in it, has been hailed by others as a masterpiece, and the attention to detail is incontrovertibly extraordinary. There are a few liberties taken with the action—guns don’t appear when you expect them to, such as during the duel scene, and then they do appear when you don’t, in the final scene, the distraught Onegin attempts to commit suicide, but finds his gun is unloaded. But by and large, the unexpected moments work, and help to bring out elements of the characters that remain undeveloped in other productions. The desperation to impress and the ultimate pathos of his Lensky, in particular, is beautifully drawn, and for opera, an unusual amount of attention is paid to realistic acting techniques.

“Especially when I’m working in Russia, I have a real desire to create an authenticity, and a documentary-like style, because in Russia opera often functions as an imaginary world that’s very different from the world we live in and the lives we lead. Opera shouldn’t be decorative, it should have relations to the people sitting in the hall, and so I’ve always tried to attain this documentary feeling.” As such, he said, he finds it awkward when critics or other theater-goers give him opinions on artistic or directorial elements of his stagings, but if someone comes to him and tells him that a particular moment in one of the operas reminded them of events or emotions in their own life, he feels that he has succeeded.

Since then, he has been back at the Bolshoi to produce a stunningly effective version of Alban Berg’s avant-garde opera “Wozzeck,” and a rather less impressive “Don Giovanni.” Many of his stagings are claustrophobic, set in box-like environments, sometimes literally. The visually striking “Wozzeck” features the stage compartmentalized into 12 small boxes, while the “Tristan und Isolde” he put on at the Mariinsky sees the action take place on a submarine. The first five scenes of “Onegin” take place in the same room, including the duel scene, which is reinvented as a brawl gone wrong, the morning after Tatyana’s birthday party.

As for the bizarre “Don Giovanni,” Tcherniakov himself said he was unhappy with the way the production, which had originally been premiered with a different cast in Aix-en-Provence, went off in Moscow. Some confusing rewriting of the story and the relationships between the characters was off-putting and simply didn’t seem to work.

Now, he said, he is on a mission to bring some of the more undiscovered operas in the Russian repertory to wider audiences in Europe. “Even now, when people aren’t just seeing me as a Russian director who they’ll invite to put on Russian operas, and I can basically do whatever I want, I still feel some kind of mad mission,” he laughed. There are only four Russian operas which have anything like repertory status in the West, namely Pyotr Tchaikovsky’s “Eugene Onegin” and “The Queen of Spades,” Mussogsky’s “Boris Godunov,” and Dmitry Shostakovich’s “Lady Macbeth of Mtsensk.” “In Russia there are a huge number of works that very few people know abroad—‘The Tsar’s Bride,’ ‘The Tale of the Invisible City of Kitezh’ (both by Nikolai Rimsky-Korsakov), ‘Ruslan and Lyudmila.’ I think they are amazing, and they just need to be presented in a different way to the European public and they could become as much a part of the repertoire as ‘Don Giovanni’ or ‘La Traviata.’ Now they are still seen as sort of eclectic Russian works which ‘they’ do ‘over there’ and we only see occasionally when the Mariinsky comes on tour. I think that’s a shame.”

Before that, there will come the big test of “Ruslan and Lyudmila,” and how it will be received at such an extraordinarily high-profile event as the reopening of the Bolshoi. Asked if it will be scandalous, he laughed gently. “I never try to create a scandal,” he said.