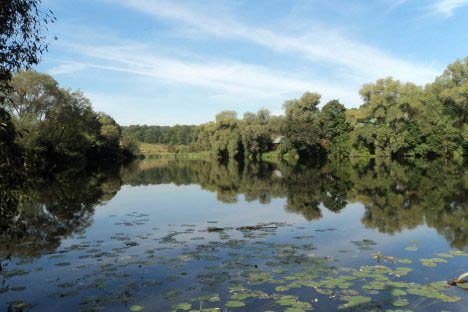 A recent conference at Yasnaya Polyana gave scholars and translators of the works of Leo Tolstoy and Sofia Tolstaya a chance to teach and learn.

Yasnaya Polyana, the famous Leo Tolstoy memorial museum, is an estate outside Tula that houses a vast number of objects that once belonged to the writer’s large family. Tolstoy spent most of his life here, and almost all of his books were written here. And it was also here, in a forest not far from the estate, that he was buried in a modest grave.

The furnishings in all the rooms remain the same as they were during the last year of Tolstoy’s life. Even the closed cabinets and trunks contain their original objects. During the Second World War, almost everything was evacuated in advance of the Germans’ arrival. The Nazis buried their fallen soldiers just a short distance from where Tolstoy was buried; their graves were later relocated. As they left, the Germans set fire to the building and said it had been mined inside (this was a lie, but those who rushed to extinguish the fire did not know it). Two empty bookcases that had not been evacuated were burned down and the walls caught fire. To this day, the museum’s staff still considers it a miracle that there was some water in a long-abandoned well next to the building: This was the only reason that the fire was put out in time. Today, everything looks as it did when Tolstoy lived here: even the stables remain (the writer was very fond of horses). It has been visited by thousands of tourists. Even on a weekday, you can see parents strolling through the park with their children and guided tours are offered. And every year at the end of August (when both the writer and his wife, Sofia Andreevna Tolstaya, were born), Yasnaya Polyana hosts an international conference for translators of Russian literature.

“My parents were Communists. That’s how I began learning Russian,” said Eva Van Santen, a translator from the Netherlands who translated Sofia Tolstaya’s novella “Who Is to Blame?” into Dutch. We are sitting at a table in the café of the Yasnaya Polyana hotel. Catherine Porter, a translator from Britain who sits opposite, is surprised: “Really? It was the same thing for me. I began learning Russian because my parents were Communists.” Later, Turkish translator Sabri Giurses said the same thing. Perhaps this was the most important achievement of the Communist Party of the Soviet Union.

“Who Is To Blame?” is unique in the history of world literature because it was Sofia Tolstaya’s response to her famous husband’s “Kreutzer Sonata.” That's why in France, for example, the two works have been published in one volume. And in Germany, “Who Is To Blame?” was published along with Sofia Tolstaya’s autobiography “My Life;” the parallels between the autobiography and the fictional book are clear.

It took Catherine Porter 27 years to translate Sofia Tolstaya’s “Diaries.” That’s a whole lifetime. She did two versions of the translation, trying her best to convey the voice of this woman who bore 13 children and raised eight of them (five died in infancy); who copied out the immense “War and Peace” seven times, with all the corrections; who sewed clothes for her husband and children herself, and also oversaw the complex household and financial affairs of a large estate.

“The image of the Tolstoys in popular literature in the West and in Hollywood films does not reflect reality,” Porter lamented. Even her translation of the “Diaries” was published with a highly biased foreword by Doris Lessing.

French translator Helene Henry did a meticulous analysis of the French translations of “Anna Karenina”. There are just two of them. The more recent one, by Sylvie Luneau, is more accurate, though not flawless. It is used in academic publications. For a broader audience, the Gallimard publishing house still uses Henri Mongault’s translation from the early 1950s. “At that time, the French believed that Tolstoy always wrote in long sentences. And Mongault did his best to make Tolstoy write in long sentences,” Helene Henry joked. “It makes my hair stand on end to think that many French people still learn “Anna Karenina” from this text, which is full of mistakes and omissions,” she added.

Listening to these foreign translators passionately and meticulously analyze Tolstoy’s texts, I, a Russian reader, was surprised to see how much I had missed in these well-known books, some of which are among my favorites. Tolstoy’s metaphors. His circular composition. The significance of lexical repetitions. Perhaps “an ordinary Russian reader” doesn’t need to grasp all that and their immediate impression is enough. But translators doing the delicate work of reconstructing the text in a foreign language must make informed and correct decisions about what can be left out and what must be preserved in every case. They have to examine the book more carefully.

The Yasnaya Polyana conference is an amazing event where educated people from across the world (from China to Argentina) speak more Russian than English. It’s not a place for official propaganda or professional “experts on Russia”, but a place for people sincerely interested in Russia to speak out against stereotypes and advocate for a better understanding of Russians. This is a miracle and Leo Tolstoy and Sofia Tolstaya, as well as the people who have maintained this unique museum for all these years, are the ones who conjured it up.