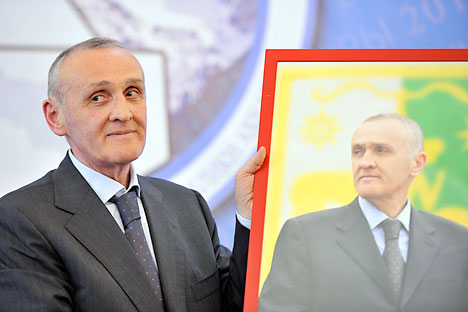 The early presidential elections in Abkhazia, which took place on Aug. 26, followed a campaign full of symbolic undertones. First, it was an unanticipated election, held three-and-a-half years ahead of schedule because of the unexpected death of the republic’s president, Sergei Bagapsh. Abkhazia’s political class only had a couple of months to get its act together and organize a campaign in the absence of any leaders of comparable stature to the republic’s late president. Secondly, the election of the new head of Abkhazia fell on the third anniversary of Russia’s recognition of its independence. On Aug. 26, 2008, Russian President Dmitry Medvedev issued a decree triggering international legitimization of the Abkhaz state. Today, nobody can say with complete certainty how soon the international community will recognize Abkhazia; the process may drag on for years or even decades. Be that as it may, the process began with Russia’s recognition of the country at the end of the “five-day war” with Georgia.

The fact that the polling day coincided with the anniversary of recognition lent the campaign special significance. Extraordinary elections (even for a UN member country) always take on added importance, and in the case of Abkhazia, any campaign is a tacit competition with Georgia. Consider this: If the election of Bagapsh’s successor had been accompanied by conflicts or civil confrontation, it would have provided Tbilisi and its supporters in the U.S. and Europe with grounds for claiming that the Abkhaz project had fully or partially failed. That would have provided Georgia with one more argument to bolster its claims to the disputed territory. But the extraordinary elections did not give Abkhazia’s critics any confirmation of their phobias and stereotypes. The campaign began with the signing of the Fair Elections Charter and the candidates were all given equal air time. Journalists asked tricky questions of whomever they liked. There was an interesting exchange between Izida Chania, Editor-in-Chief of “Nuzhnaya Gazeta” and Alexander Ankvab. It was impossible to predict who would be the winner until the very last day of the elections.

Of course, the elections produced their share of scandals and black PR. For instance, an article was published about Ankvab’s alleged links to the Georgian security services. Yet the same thing sometimes happens even in the leading democratic states, and the information had little impact on the election debate. Even those who were suspected of organizing it soon tried to dissociate themselves from it.

The election results are also worth noting. Yes, Alexander Ankvab scored an outright first-round victory with 54 percent of the vote. But his opponents Sergei Shamba and Raul Khadjimba garnered almost 40 percent of the votes between them, so Akvab will have to take into account the sentiments of those who did not want to concede defeat.

But the election determined only the name of the new head of the republic –it did not resolve any of the important problems facing the Abkhaz government and society today. The election of a new president does not guarantee success in the fight against crime, which is essential if Abkhazia is to develop its potential as a vacation destination. Likewise, a new president will hardly open the doors to the UN or attract generous investments. Yet the elections were extremely important as a step towards political maturity. They have shown that, even without Bagapsh, Abkhazia is ready for the democratic process and a continued fight for recognition.

The extraordinary elections tested Russian-Abkhaz relations. After recognition of the republic’s independence, Russia’s social-economic and geopolitical involvement in Abkhazia’s affairs increased: financial aid was boosted and peacekeepers were replaced with army and border guards. On the one hand, all this removed the old problems. In Tbilisi today, even the most radical nationalists have abandoned calls to repossess Abkhazia by military means. On the contrary, there is talk about “drawing” the republic into common projects and establishing a dialogue with its people, if not with its government. It is noteworthy that the Georgian authorities, which for years have rejected the very idea of a neutral passport for Abkhaz citizens (thereby signifying support for separatism), are now its active proponents. There is a promise of major Russian investors coming to the republic. Not by chance have such Russian business giants as Rosneft been more active there recently. With the 2014 Sochi Olympics approaching, Abkhazia’s future looks highly promising. But there is a danger that the flow of cash and geopolitical resources might undermine Abkhaz independence and bring key sectors of the republic’s economy under the control of Russian capital. All this prompted fears concerning the Kremlin’s interference in the electoral campaign, especially as Moscow made clumsy attempts to support the “right candidate” during the 2004 electoral race.

The Russian leadership did not, however, repeat its previous mistakes in 2011. Incidentally, the fact that there were three presidential candidates helped. They did not parade their friendship with Vladimir Putin and Dmitry Medvedev and made no attempt to use their links with Moscow – which they all have – as a weapon against their opponents. As a result, Russia managed to assume the role of an objective observer prepared to work with whomever was voted in. This was the only correct way to behave because, for all the substantial differences in internal accents, Ankvab, Shamba and Khadjimba positioned themselves as champions of geopolitical partnership with Russia. Ankvab is no easy partner, but the newly elected leader is making fighting corruption and crime his main priority. It is no secret that corrupt Abkhaz officials have many links to Sochi and Moscow, and if the Russian authorities help the new president in his initiative, they will not only strengthen his positions inside Abkhazia, but also bolster their own interests throughout the Caucasus.

Yet the 2011 elections cannot be reduced to the Sukhumi-Moscow format, as they have provoked a reaction from other interested players. For instance, Victoria Nuland of the U.S. State Department said that Washington does not recognize the Abkhaz elections while NATO Secretary General Anders Fogh Rasmussen stressed that the holding of elections “does not contribute to a peaceful and lasting settlement of the situation in Georgia.” It would not be an idle question to ask what would be conducive to such a settlement? Is the democratic procedure worse than turning an entity, even an only partially recognized, into a “federation of warlords?” A more balanced and sound assessment came from European Union foreign policy chief Catherine Ashton, who said that Europe did not recognize the “legal framework” of the Abkhaz elections. The early election in Abkhazia thus demonstrated once again that the republic exists in two parallel geopolitical dimensions: On the one hand, it is an “occupied territory” and part of Georgia; on the other, it is a sovereign state whose newly elected president received official congratulations from Moscow and from the capitals of the four other states that recognize Abkhazia’s independence.

Perhaps gaps can be found in the “legal framework” of the elections in the republic. For example, there is the requirement, under Article 49 of the Abkhaz Constitution, that the candidate must be a citizen of the republic and, moreover, he must be an ethnic Abkhaz. The status of the Georgian population in the Gali District is somewhat dubious, as many people there do not have Abkhaz citizenship and find difficulty in integrating into the life of society and the economy. Be that as it may, Abkhazia has lived outside Georgia for almost 20 years, since the armed Georgia-Abkhazia conflict ended in 1993. It lives outside the Georgian legal, political, social, information, education and even linguistic space. It does not just exist, but it elects its own presidents, parliament and local government. This fact should probably be taken into account by strategic players in the Greater Caucasus and in the post-Soviet space in general. Like it or not, a country called Abkhazia exists, and this is a fact that cannot be ignored.

Sergei Markedonov is a visiting research fellow at the Center for Strategic and International Studies in Washington, DC